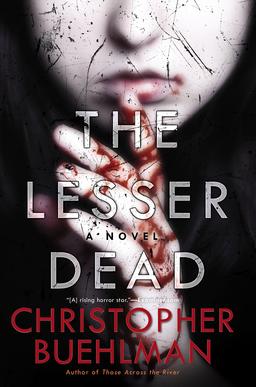 Christopher Buehlman’s debut novel Those Across the River (2011) was nominated for a World Fantasy Award, and Charlaine Harris called it “one of the best first novels I’ve ever read.” He followed up with Between Two Fires (2012), the tale of a disgraced knight coming face-to-face with apocalyptic horror in 1348, and The Necromancer’s House (2013), the story of a modern sorcerer on the run from a monster straight out of Russian folklore.

His newest novel, The Lesser Dead, was published in hardcover in 2014, and released in trade paperback late last year. It was nominated for the Shirley Jackson Award for best novel, and won the American Library Association’s Best Horror Novel of the Year award. It’s the story of a secret colony of vampires in New York City who find themselves being preyed on by something far darker than themselves….

New York City in 1978 is a dirty, dangerous place to live. And die. Joey Peacock knows this as well as anybody — he has spent the last forty years as an adolescent vampire, perfecting the routine he now enjoys: womanizing in punk clubs and discotheques, feeding by night, and sleeping by day with others of his kind in the macabre labyrinth under the city’s sidewalks.

The subways are his playground and his highway, shuttling him throughout Manhattan to bleed the unsuspecting in the Sheep Meadow of Central Park or in the backseats of Checker cabs, or even those in their own apartments who are too hypnotized by sitcoms to notice him opening their windows. It’s almost too easy.

Until one night he sees them hunting on his beloved subway. The children with the merry eyes. Vampires, like him…or not like him. Whatever they are, whatever their appearance means, the undead in the tunnels of Manhattan are not as safe as they once were.

And neither are the rest of us.

First let me just say that apart from Bram Stoker’s “Dracula” and the occasional wholesome, old-fashioned (by that I mean without blood all over the place) Victorian vampire story, this is not a genre or sub-genre that I have much experience with.

But what I don’t understand about novels like this is that if vampires really were so plentiful, wouldn’t most people take reasonable precautions like rubbing their necks with garlic whenever they went out and wearing big–really big (so even near-sighted vampires couldn’t miss it)– crosses around their necks at all times?

Granted, the main vampire character and lesser vampire characters in a book like this wouldn’t then be able to run amok (to the delight of readers) and there wouldn’t be any storyline, but it would be more believable.

One final observation. Unless people assume that the girl on the cover is suffering from a nosebleed, I think that most potential interested readers when seeing this cover will be left in no doubt that they’re in for a great deal of neck-biting carnage should they decide to buy it.

Let the bloodletting begin! Rivulets and waterfalls of blood are sure to delight all. Red, red, RED!

Oh, sorry. I think this cover with the blood-spattered image has had a corruptive influence on me.

You’re absolutely right that any time a premise includes a colony of vampires of any appreciable size, the writer has some work to do to make it believable. But I’m certainly willing to believe a small group of vampires could survive quite happily in a city like New York (population 8.5 million) without letting people know of their existence… if they’re careful.