This time next week you’ll be contemplating a pile of Amazon gift vouchers and book tokens.

You’re a Black Gate reader. Your muggle relatives can’t even guess your tastes. Your geeky friends know that your wishlist is too specific to second guess.

I won’t try to guess your tastes either! However, if you are interested in the medieval world, or medieval-style worlds, some of the following old books from my research shelf might tempt you…

A History of Everyday Things in England (Archive.Org link) by Marjorie and CHB Quennell is a pre-WWI classic and part of a series that goes through to 1914 (Wikipedia).

Aimed at the older children of yesteryear — meaning it’s a fine read for a modern adult — this beautifully illustrated book covers everything from pottery to architecture, arrow loops to siege engines, and armour to aumbries, it drops in lots of quotes from original sources, and — written in a time of servants and country weekends — feels authentic when it explores the manor houses and castles of the time.

It also approaches the culture and economics from the inside, with sections on ships and merchants, and ground plans of typical buildings.

Though it pulls no punches — describing the English as acting like the Hun in 14th-century France — it’s a cosy oak-panelled read for fireside days while the rain batters at your window, but also a jumping off point for recreating medieval domesticity.

Medieval Costume, Armour and Weapons by Wagner, Drobna and Durdik was written in the 1950s. Wagner, the mastermind  behind the book, was a former Czechoslovakian cavalryman (I kid you not), expert rider and swordsman (naturally), an early scholar of Historical European Martial Arts texts, and a museum curator. It’s not so much a doorstop as an actual door of a book, being 12″ x 9″.

Despite the title, the focus is firmly on Late Medieval Bohemia, which sounds obscure unless you are a military history buff, at which point the name screams “HUSSITES!”, the amazing heretics (or early Protestants) who used war wagons and hand guns to beat back the crusading armies of Western Europe… basically Roundheads in the Middle Ages re-imagined by Heavy Metal Artists who’d played too much Warhammer.

It has 73 pages of scholarly chapters on costume, flags, horse equipment, weapons, and war wagons, then a hundred pages of beautiful plates, which is what you buy it for.

Some plates show items from museums, most are redrawn from Medieval manuscripts (like on the cover), and there are some technical drawings of crossbows, siege weapons and polearms.  It’s a bit like what might happen if the old AD&D Players Handbook collided with a shelf of Osprey books.

The effect is like falling asleep to Carmina Burana — thumb through the plates to drift off to drift off to another time and place. Dover do a nice reprint, but the older editions have more illustrations in colour.

Curious Myths of the Middle Ages (Shortened edition on Guttenberg link) by Sabine Baring-Gould (who wrote the lyrics to Onward Christian Soldiers) is best-of-breed Victorian antiquarianism, properly researched, but well and lightly written with a 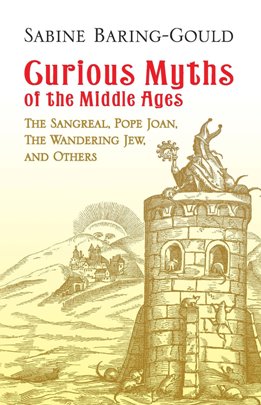 n eye for the dramatic and macabre.

This book nails all those pesky medieval myths other people keep referencing. The shortened edition covers the Wandering Jew, Prester John, The Divining Rod, The Seven Sleepers of Ephesus, William Tell, The Dog Gellert, Tailed Men, Antichrist and Pope Joan,The Man in the Moon, The Mountain of Venus, Fatality of Numbers, The Terrestrial Paradise. The Dover reprint adds the same again, covering legends like the Pied Piper, the Sangreal, and the Knight of the Swan.

It’s a bit like one of those scenes in a vintage Hammer Horror when an old guy in tweeds explains the back story over a glass of malt whisky. It’s certainly the kind of book that belongs in the research library of Watchers, Grims and Van Helsings,  not to mention writers. Read it to plunge into the medieval world view, or to populate the corners of your map with more than Here Be Dragons…

I’ll be back in the New Year with more Medieval worldbuilding articles, writing advice and more. Until then, have a Merry Christmas and a Happy Hogmanay!

M Harold Page is the sword-wielding author of books like Swords vs Tanks (Charles Stross: “Holy ****!”). He has sworn to put the Heavy Metal back into any genre foolish enough to cross his path. If you already have built a world but need a story to bring it to life, take a look at his  Storyteller Tools: Outline from vision to finished novel without losing the magic.

Lovely looking illustrations, evocative and informative. Reminds me in some ways of the illustrated histories of Eric Sloane, who also like to explore and examine the day-to-day objects of life, like barns and tools.

Also, the Baring-Goulds are quite the collectors of folklore and fantastic tales, what with the Rev. Sabine’s grandson, William S. B-G, writing The Annotated Mother Goose as well as The Annotated Sherlock Holmes.

Didn’t know about William S B-G! Quite a dynasty. A lot of BG on the Gutenberg Project, for those interested.