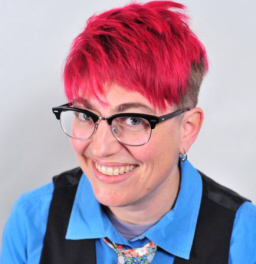 The changes at io9 have begun, as the site begins restructuring in preparation for its upcoming merger with design and technology blog Gizmodo. Perhaps the biggest change occured yesterday with the departure of founder Annalee Newitz. In her public goodbye, Newitz wrote:

Today is my last day at io9 and Gizmodo. It’s been a long, astounding road, to say the least. I founded io9 back in 2008, and I watched it journey from the farthest reaches of space to its current home under this atmosphere bubble on Ceres… In January of this year, I took on the role of editor at Gizmodo, and since then, Charlie Jane and I have been integrating the world of io9 into Gizmodo. It’s kind of like we joined the United Federation of Planets….

And this is where my path diverges from io9 and Gizmodo. This past year managing both sites taught me that I’m not actually interested in being a manager. I want to write.

Annalee Newitz was one of io9‘s most talented writers, and we certainly understand her desire to pursue a writing career. Katie Drummond will take over from Newitz, and Charlie Jane Anders (whose own first novel, All the Birds in the Sky, will be released by Tor on January 26) will continue as Editor-in-Chief.

io9, one of the most popular locations for SF fans on the web, was launched in 2008 by Newitz and Anders. It covers science fiction, fantasy, comic books, science and technology. The site is owned by Gawker Media, which is restructuring its many holdings to focus more on politics (Gawker’s other holdings, including celebrity gossip site Defamer and Valleywag, which covers Silicon Valley, will be closed down). The merger with Gizmodo has apparently been in the works for months; when completed, io9 will become a section of Gizmodo, and io9.com will redirect to Gizmodo. All existing content will be preserved.