Five Star didn’t get a lot of attention from the mainstream genre press, and many of their more interesting efforts sailed well below the radar. As a result, I didn’t learn that they’d produced a quartet of novella collections — by Robert Silverberg, Pamela Sargent, Gregory Benford, and Mike Resnick — until a few weeks ago. As soon as I discovered the existence of In Another Country and Other Short Novels by Robert Silverberg, I tracked it down immediately. I found a brand new copy for sale through Amazon for just $3.65, and ordered it on the spot. It arrived last week, and I’m extremely pleased with it.

Part of the reason I’m so pleased with this discovery (besides my life-long love of novellas) is that work at the novella length is seldom reprinted… the awkward length means novellas rarely make it into anthologies and collections. So discovering four such collections at once, from such respected writers, was like stumbling on buried treasure.

I was surprised to find, when In Another Country and Other Short Novels arrived, that it was printed in “library binding,” which means that it has no dust jacket. The cover art is printed directly onto the surface of the book. I understand this is generally more expensive to produce, so it’s usually only done for select markets (and for kids books). This makes sense for a publisher specializing in the library market, and I probably should have expected it. 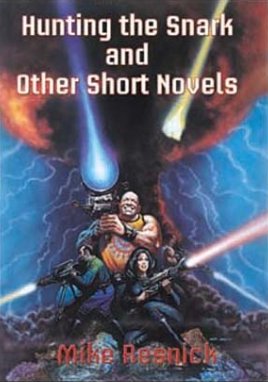 I was impressed enough by In Another Country to investigate the other Five Star novella collections in the set. All four were published in February and March 2002.

Pamela Sargent’s Behind the Eyes of Dreamers and Other Short Novels was also published in February 2002. It collects a novelette, two novellas, and an intro by George Zebrowski:

Introduction by George Zebrowski
“Shadows” (Fellowship of the Stars, November 1974)
“Behind the Eyes of Dreamers” (Amazing Stories, November 1990)
“The Renewal” (Immortal: Short Novels of the Transhuman Future, May 1978)

The book is 224 pages, originally priced at $24.95 in hardcover. The cover is by Ron Walotsky. It is out of print, but Open Road Media, publishers of The Complete Short Fiction of Clifford D. Simak, reprinted Behind the Eyes of Dreamers as an e-book in May 2015. The digital edition is still in available, priced at $9.99.

Immersion and Other Short Novels by Gregory Benford appeared in March 2002. It contains three novellas and a novelette, including the Hugo nominee “Immersion,” and the Nebula nominee “Matter’s End.” Here’s the complete contents:

It is 253 pages, originally priced at $23.95 in hardcover. The cover is by Ken Barr. It is also out of print, and quite collectible. Gateway / Orion produced an e-book version in the UK in July 2013.

Here’s a sampling of some of the magazines these stories originally appeared in: Resnick’s “Hunting the Snark,” Sargent’s “Behind the Eyes of Dreamers,” and Silverberg’s “In Another Country.” (Click for bigger versions.)

[Sharp-eyed gamers will note that the cover of the November 1990 Amazing looks very familiar. TSR, which bought Amazing in 1982, recycled the famous artwork from the cover of the seminal science fiction game StarForce, originally published by SPI in 1977. TSR absorbed SPI in 1983.] 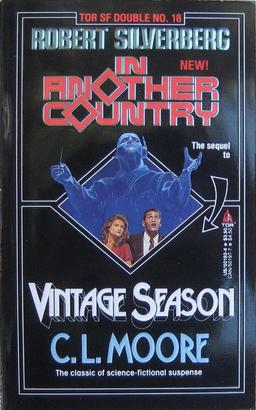 In Another Country was also published in March 2002. It collects what Silverberg, in his introduction, calls “four of my best longer stories, representing a twenty-year period of work and a variety of moods and modes.” The title story is a sequel to C.L. Moore’s “Vintage Season” — and in fact was paired with that classic tale in Tor Double #18 (at right).

The complete contents of In Another Country are:

Introduction by Robert Silverberg
“In Another Country” (Isaac Asimov’s Science Fiction Magazine, March 1989)
“The Way to Spook City” (Playboy, August 1992)
“They Hide, We Seek” (Isaac’s Universe, Volume One: The Diplomacy Guild, April 1990)
“This Is the Road” (No Mind of Man: Three Original Novellas of Science Fiction, 1973)

The Los Angeles Times says of Robert Silverberg, “…his is the hand of a master of his craft and imagination.” Here the award-winning and universally acclaimed author brings us four very different views of places and people both real and imagined. In the title novella, strange travelers from a distant land arrive on the 20th-century West Coast in Silverberg’s amazing sequel to C.L. Moore’s classic “Vintage Season.” “The Way to Spook City” reveals an America divided, not by dissent or revolution, but by extraterrestrials who have taken over its heartland.

In “They Hide, We Seek,” mankind has joined five other races among the stars. Then possible evidence of a seventh race is found, threatening to change the balance of power. Finally, in “This Is the Road,” all creatures on a fantastic planet flee from bestial invaders known as the Teeth, who pillage and loot in unstoppable frenzy.

The book is 311 pages, and was originally priced at $24.95. The cover is by Ken Barr. It is long out of print, and there is no digital edition, but new copies are still available at excellent prices through online sellers at Amazon and other sites.

I think a high-quality set of hardcovers collecting hard-to-find novellas from some of the top names in the industry was a terrific idea. Unfortunately, it didn’t look like Five Star had the marketing muscle to make it a success… or perhaps the industry would have responded with a shrug no matter who attempted it. Novellas are a notoriously tough sell to a marketplace that prefers novels.

Regardless, these four volumes are all well worth tracking down, and currently only Immersion commands a premium on the collectors market. The other three are very inexpensive, even in good condition, and both the Benford and the Sargent volumes have digital editions. Check ’em out.

It seems likely that the seller with that copy of In Another Country and Other Short Novels simply didn’t have the dustjacket. All my Five Star books came with both. Having said that, who knows, it could be an anomaly. In any case Five Star produced quite a few books, though most sailed under the radar, as you say, including Ekaterina Sedia’s first novel and Jim C Hines’s Goblin Quest. The library market is so finicky that what might work overseas doesn’t really translate well here.

> It seems likely that the seller with that copy of In Another Country and Other Short
> Novels simply didn’t have the dustjacket. All my Five Star books came with both.

Ah, good to know. Thanks (and now I have to track down a dust jacket!)

> Five Star produced quite a few books, though most sailed under the radar, as you say, including
> Ekaterina Sedia’s first novel and Jim C Hines’s Goblin Quest.

I wasn’t aware either of those folks were first published by Five Star. I’ll have to track them down. According to ISFDB, According To Crow, Ekaterina Sedia’s first novel, is only available in the Five Star edition. I imagine it’s quite collectible at this point.

There is a list somewhere listing all of the Five Star Books, but I can’t find it right now. Though you could use http://www.isfdb.org/cgi-bin/publisher.cgi?268 and just go through the years. I never reprinted According to Crow because it didn’t fit with Sedia’s career switch. There is probably quite a few of true first editions floating about from that library series, from 2002 to 2008. Parkas, for example, had The Long Look appear there.

And then there’s the SFBC first editions of original works that everyone overlooks . . .

I’m not sure why so many folks discount the SFBC editions. They’ve done some fabulous releases over the years. Although they do tend to fall apart after multiple readings.