There’s nothing quite like finally laying your hands on a book that’s eluded you for years. That happened this week with Chelsea Quinn Yarbro’s first collection, Cautionary Tales, published in paperback by Warner Books in 1980 with a moody and gorgeous cover by Leo & Diane Dillon, showing a group of aliens and humans conducting a (surprisingly effective) seance. Cautionary Tales collects 13 science fiction and dark fantasy stories published between 1971 and 1978 in magazines like Galaxy and IF, and anthologies like Chrysalis. and Faster Than Light.

It has an introduction by none other than James Tiptree, Jr, only recently revealed as ex-Army major and CIA operative Alice Sheldon in 1980. Tiptree writes:

If you are looking for the jolly engineering dilemmas of plastic space jocks on the Aldebaran mail run, look elsewhere. You will indeed find a spaceship here, but what goes on among the all-too-real crew of “Dead in Irons” is harsh human shame, a story of innocence compelled to participate in ghastly deeds, able at the end only to strike one lost blow of vengeance. Deftly touched behind the grind of pain is a convincing extrapolation of the star civilization that bore it.

On the other hand, and just to surprise you, Yarbro has given here what is the only merry, even charming tale of After the Holocaust that I can recall: “Frog Pond,” And for still another facet, view the curdlingly mundane problems besetting a lady ghoul attempting to gain access to the city morgue, in “Disturb Not My Slumbering Fair.” (It should be noted that Yarbro does a brisk business in vampires in another of her many lines of work.) But for pure alien beauty, remarkably seen through alien eyes, “Un Bel Di” is quite unforgettable, even apart from the cruelty that is perpetrated there.

I’ve always been taken by the description of the stories inside, which reveals a surprisingly fertile imagination — even in a field known for imagination. Click on the image above right to read the full text in its native environment, or just read it here:

A bizarre and haunting journey through inner and outer space — to alien worlds where an aging playwright is in danger of losing his soul to a monstrous organic computer… a charming teeny-bopper ghoul solves the problem of hunger in the town morgue… a member of the patrol squad on a dreary, useless planet is lured by the sucking darkness of evil Scranton’s Marsh… the frozen steerage passengers on a floundering space ship share a gruesome fate… malevolent forces on the other side of death are held at bay by a huge black swan… and other strange and wondrous events beguile the reader to the edge of human horror — and beyond!

I bought Cautionary Tales as part of a collection of 14 vintage books by Chelsea Quinn Yarbro I found on eBay. I bought the entire collection for $10.78 — a criminal bargain. Here it is: 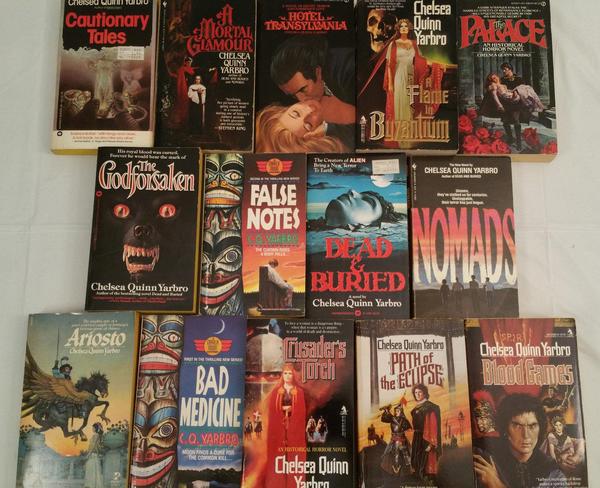 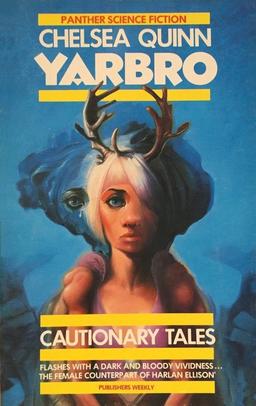 I bought the collection chiefly to get a copy of Cautionary Tales, but believe me, I was more than happy to also obtain so many novels in her Saint-Germain chronicles. One of the many projects on my to-do list is a survey of the paperback editions of the Saint-Germain books (and the three Atta Olivia Clemens spin-off titles, with their gorgeous Sanjulian covers) for Black Gate.

Cautionary Tales was published in hardcover by Doubleday in November 1978, and reprinted in paperback by Warner Books in January 1980. The paperback edition is 255 pages, priced at $1.95. The cover is by Leo & Dianne Dillon. It was reprinted in the UK by Panther in 1983. It has never been reprinted in the US, and has now been out of print for over 35 years. There is no digital edition.