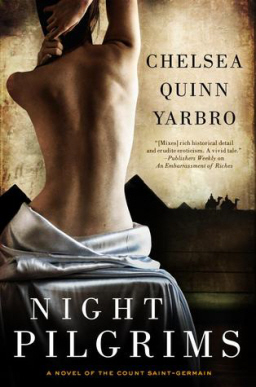 Last April, we reported on the special Bram Stoker Award given out to the Vampire Novel of the Century (the Century in question being the 20th, for you confused millennials in the crowd.)

Hotel Transylvania (1978), the very first Count Saint-Germain novel, was a heavy contender for that special award, and in the 35 years since it appeared Yarbro has built up a loyal following with over two dozen novels featuring the immortal Count. Last week the 26th, Night Pilgrims, arrived in stores.

Even setting aside her popular Saint-Germain series, Yarbro is a heavy-hitter in fantasy circles. Two of her earliest novels, The Palace (1979) and Ariosto (1980), were nominated for the World Fantasy Award, and she was named a Grand Master at the World Horror Convention in 2003. The last Yarbo title we discussed here was her 1985 paperback To the High Redoubt.

Chelsea Quinn Yarbro’s first Saint-Germain novel, Hotel Transylvania, was recently nominated as Vampire Novel of the Century. Her Saint-Germain cycle, now comprised of more than twenty-five books, is a masterwork of historical horror fiction. The vampire Count Saint-Germain has crisscrossed the world many times, seeking love and the blood of life and seeing humanity at its best and worst.

In Night Pilgrims, Saint-Germain is living in a monastery in Egypt when he is hired to guide a group of pilgrims to underground churches in southern Egypt. The vampire finds a companion in a lovely widow who later fears that her dalliance with the Count will prevent her from reaching Heaven.

The pilgrims begin to fall prey to the trials of travel in the Holy Lands; some see visions and hear the word of God; others are seduced by desires for riches and power. A visit to the Chapel of the Holy Grail brings many quarrels to a head; Saint-Germain must use all his diplomacy and a good deal of his strength to keep the pilgrims from slaughtering one another.

[…] for example. (And the series is still going strong — with volume 26, Night Pilgrims, just released in […]

[…] previously covered Chelsea Quinn Yarbro’s novels To The High Redoubt and Night Pilgrims. Sustenance will be published on Dec 2 by Tor Books. It is 480 pages, priced at $29.99 in hardcover […]