Two weeks ago I wrote about Chelsea Quinn Yarbro’s third novel, Hôtel Transylvania (1978), the opening novel in the celebrated Count Saint-Germain series, one of the first (and most successful) vampire romance sagas. It reminded me that, before Yarbro became a celebrated horror writer, she was well on her way to being one of the most acclaimed fantasists in America, with two of her earliest novels, The Palace (1979) and Ariosto (1980), nominated for the World Fantasy Award.

Ariosto was first published by Pocket Books, with a cover by Don Maitz (left). In addition to the World Fantasy, it was also nominated for the Balrog Award, and placed 11th in the Locus poll for best Best Fantasy Novel of the year. It was reprinted only once in the US, in a new paperback edition by Tor Books in January 1988 (right, cover by McPheeters), and has been out of print for nearly 30 years.

The back cover text for the Tor version reads:

The Master of Dreams

Poet laureate to the de’ Medicis in Renaissance Italy, Ludovico Ariosto is a gentle man possessed of wisdom and great talent — his verses bring honor to his patron and make hot-blooded men weep for their sheer beauty. But in Ariosto’s grand vision, his Fantasia, he is transformed into a stalwart hero who flies on his great steed to the fabled New Americas — a world where courage will win a continent, and where one man’s nobility will help stem the tide of destruction. In this wondrous New World where magic works and malevolent wizards hold sway, Ariosto is champion.

Which vision will triumph — that of the warrior who goes nobly forth in his dreams to vanquish his foes, or that of the gentle poet whose loyalty could doom him?

Ariosto was published in April 1980 as a paperback original by Pocket Books. It is 361 pages, priced at $2.25, with a cover by Don Maitz. It is currently available in a digital edition from Open Road Media (published May 13, 2014). I bought a copy in unread condition online last month for under $2.

The cover by Maitz is hilarious. Pale faced/undead looking guy with Elizabethian ruff, holding a rapier in perfectly vertical position, astride a horse/griffen thing. And the woman on her balcony is more interested in her half dead fern! She’s obviously not interested in poet-warriors…

The beak on the second hippogriff is charmingly expressive.

I had no idea this book existed. I’m mildly allergic to vampires — that’s why I always carry an epi-pen — so Yarbro hasn’t really been on my radar. Ariosto sounds much more like my kind of thing. Thanks for calling my attention to it!

I’m more intrigued by her pure fantasies as well. I didn’t know this one existed either, until I found it in a collection on eBay. I was looking for an unread copy of THE PALACE, and found this lot for $9.99. 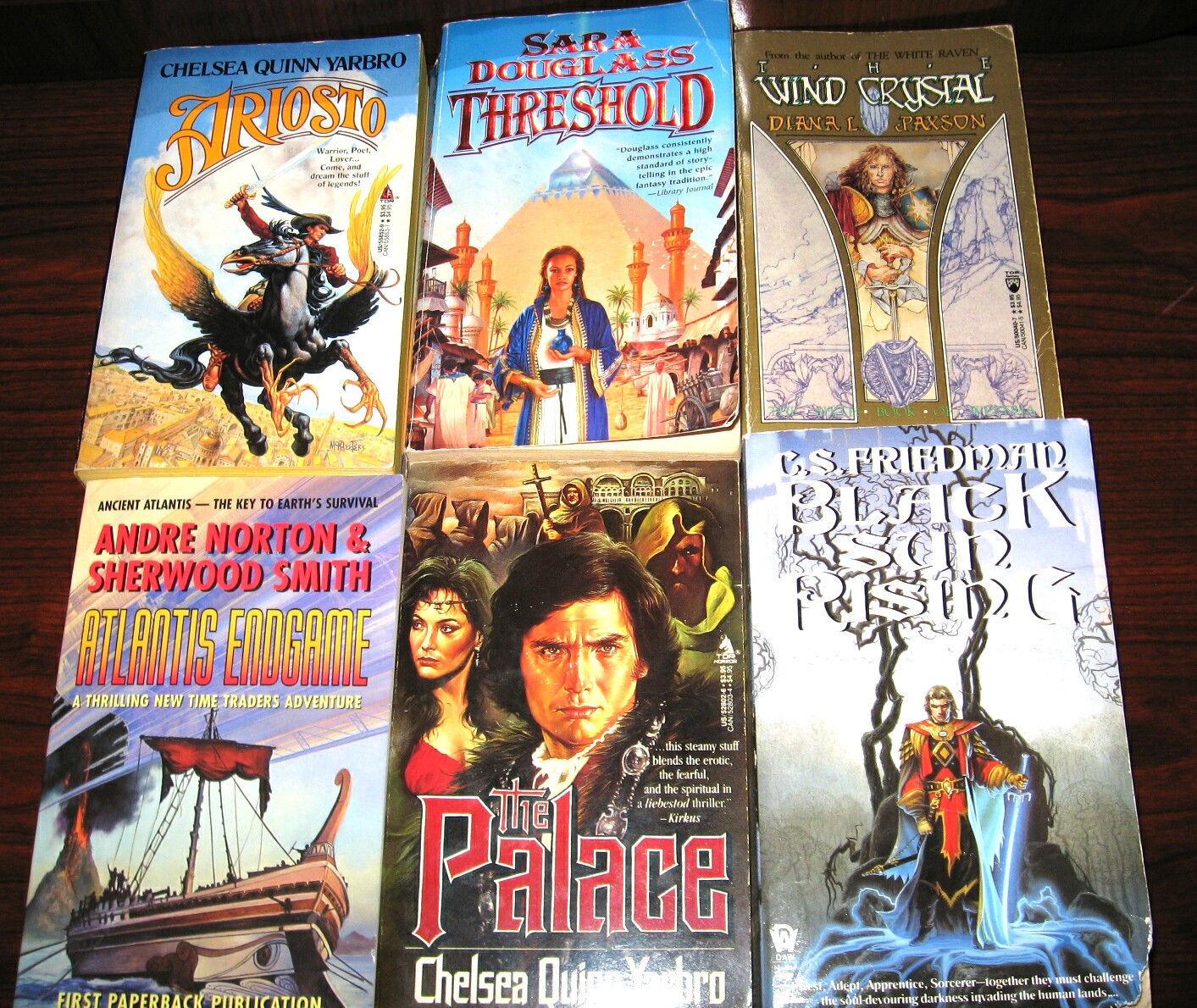 Shipping was only two bucks, so basically I got the two Yarbros for less than the price of a new paperback each, and 4 free books. Cool.

I like the Don Maitz cover, as it strikes me as being somewhat formal and stylized, akin to Renaissance portraits.
The novel itself is a story-within-a-story, set in an alternate Ren Italy that is colonizing North America (Nuova Genoa), with Ariosto writing his masterpiece fantasy about the New World. I liked it enough to get misty-eyed at the conclusion.