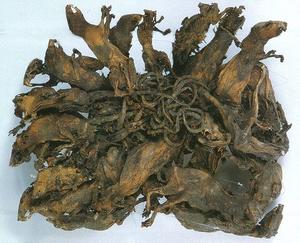 The Ancient Explorers Facebook group has explored some fascinating topics recently, including an ancient Chinese cure for obesity, the mysterious Nazca lines of Peru, and the enigmatic Voynich manuscript. But they’ve never posted anything quite like the true story of the Rat King, a near legendary medieval monster.

Several museums around the world contain bizarre once-living artifacts of a pseudo-legendary beast from the Middle Ages called a “rat king.” A rat king is formed when several rats have their tails fused together, whether by knotting or being somehow glued together. The result is a small horde of rats all facing outward from the central knot, presumably forced to act as one composite beast. The more fanciful accounts hold that one leader rat is suspended in the middle and acts as the “head” who directs the rest — a nightmarish notion, especially considering the fears of plague that rats conjure up.

The largest of these disturbing artifacts contains 32 of the little horrors and resides at the Mauritianum Museum in Altenburg, Germany. Some existing rat kings are mummified, while others are preserved in jars. Rat kings have been found in Germany, France, Poland, the Netherlands, Belgium, and Indonesia. In every case except Indonesia, the rats were black: Rattus rattus L. In the case of Indonesia, they were small field rats: R. argentiventer.

As recently as 2005, a farmer named Rein Koiv found a rat king consisting of 16 individuals (nine of which were already dead) underneath the floorboards of his farm in Estonia, their tails glued together by frozen sand.