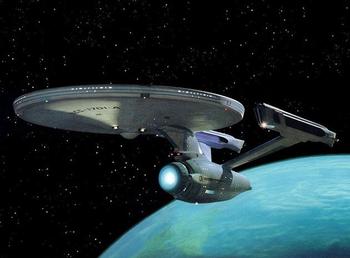 Hollywood Reporter is reporting that a new Star Trek TV series is in development, for broadcast in early 2017.

The new series will be the sixth live-action show to be based on Gene Roddenberry’s original creation, which ran from 1966-67 on NBC. It will be produced by Alex Kurtzman, co-writer of the 2009 reboot Star Trek and its sequel Star Trek Into Darkness, for CBS Television Studios. It is scheduled to premiere in January 2017 with a preview episode on CBS, before it moves exclusively to CBS All Access, an on-demand and streaming service.

The new Star Trek will introduce new characters seeking imaginative new worlds and new civilizations, while exploring the dramatic contemporary themes that have been a signature of the franchise since its inception in 1966… A search is under way for a writer to take on the cult hit. The franchise is poised to celebrate its 50th anniversary as the original series debuted Sept. 8, 1966…

CBS TV Studios distributed the original series, which was produced by Paramount Television and Desilu Productions. Created by Gene Roddenberry and starring William Shatner and Leonard Nimoy, the series ran for three seasons and 79 episodes from 1966-67 on NBC and became a monster hit via syndication. It spawned an animated series (1973-74), a series of feature films — starting in 1979 — and four TV follow-ups including The Next Generation (1987-1994), Deep Space Nine (1993-99), Voyager (1995-2001) and Enterprise (2001-05).

News of a new Star Trek TV series comes as the franchise has been mired in rights issues between CBS and Paramount after Viacom merged with CBS in 2000. CBS Corp. absorbed Paramount for television, while Paramount Studios — the company that distributed the films — went to Viacom.

No news yet on what time frame the series will take place it, although it is reportedly not linked to the new movie franchise. Read the complete article here. (Hat tip to io9 for the news.)

Now this is unexpected.

I don’t have any high expectations and other than DS9 and a few of the movies, I don’t actually like Star Trek anymore. And that distribution model seems really weird.
But someone making a new space TV show is always welcome news.

I looked up the press release on startrek.com, and it specifically says “The next chapter of the Star Trek franchise will also be distributed concurrently for television and multiple platforms around the world by CBS Studios International.”
So apparently not streaming.

I think this can work. Voyager and Enterprise fell flat for me, because the writers so obviously ran out of ideas (after TNG and DS9) and a lot of the episodes felt samey and they also started too many episode with the “moral story of the week”. Now a new start and new writers – that can work.
It depends a bit on their setting though (I didnt consider Voyagers and Enetrpreises settings as optimal for stiry telling because there were to little room to really introduce some new storieles like the war in DS9). Im always hoping to see something taking place on Earth, but that doesnt really fit the describtion above 🙂

Voyager and Enterprise tried to be remakes of TNG, not realizing how dramatically the world and western culture had changed since the early 80s. Which is odd because DS9 did realize it and had already gone to great length to reflect the new circumstances.

Given how current popular TV shows work, DS9 should actually fit in quite nicely. So maybe the people working on the new show will take more inspiration from it than simply riding the nostalgia train that already failed spectaculary before. Twice!

If it ends up being once more “A proud white American travels the galaxy and teaches the primitive aliens that their salvation lies in adopting the American Way of Life”, I don’t see any future for it.

I think it’s streaming: at least, here in the US:

“CBS Television Studios announced today it will launch a totally new Star Trek television series in January 2017. The new series will blast off with a special preview broadcast on the CBS Television Network. The premiere episode and all subsequent first-run episodes will then be available exclusively in the United States on CBS All Access, the Network’s digital subscription video on demand and live streaming service.

The next chapter of the Star Trek franchise will also be distributed concurrently for television and multiple platforms around the world by CBS Studios International.”

I loved STNG, DS9 but dropped out at voyager…

Frankly I loathe the “New” or rather “Re-Boot” or how I prefer to call it the “Chew ‘n Spew” Hollow-Wood method of destroying our childhood memories.

Star trek is great, but where’s the “Next” Star Trek…? And I don’t mean chewed into slurry, lots of CGI sparkles, any plot or good stuff filtered out so no real “Challenge” to the mind…

Somebody nominate Howard Andrew Jones to write the damn thing, and then I’ll watch.

I’m on the younger end of the spectrum of Star Trek fans. The first thing Star Trek I saw was the first Abrams movie, I really enjoyed it. A few years after that I started watching the original series on Netflix. I’ve watched all of the OS and the movies and I’ve been slowly working my way through next generation (almost to season 5).

I do like the previous Star Trek material better than the Abrams movies but not by much. I think if fans would look and the two new movies as an alternate timeline where certain key aspects are different they would enjoy it more.

IDW’s comic series based on the Abrams movies is really good and it helps fill in a lot of the blanks. What we have is a different take on Spock. One who watched his mother die and his home planet explode. He has a harder time controlling his emotions.

Comic serried addresses the issue of who Khan doesn’t look Indian anymore and the fact that many Vulcans are unable to complete Pon Farr without their home planet and some even had plans to get revenge on the romulans. It all makes for an interesting alternate timeline.

Being so new to the franchise I’ve never had the chance to watch a Star Trek show as it was releasing. But it looks like I won’t this time either because there is no way I’m signing up to CBS all access for one show.

>> Somebody nominate Howard Andrew Jones to write the damn thing, and then I’ll watch.
> What Mark Rigney said.

I think this is ill-advised.

“Not linked to the new movie franchise,” but from the same creative team…so where Roddenberry’s concept was “Wagon Train in outer space,” I expect this one will be more “24 in outer space.”