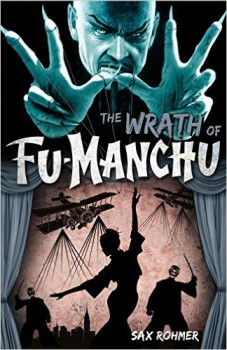 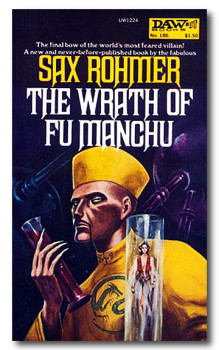 Right off the bat, the story marks a welcome return to form after the disappointment of the 1948 novel, The Shadow of Fu Manchu which was adapted, rather ham-fistedly, from an unsold stage play. While it is tempting to ignore that painfully weak entry in the series which, being based on the novels rather than continuing their narrative, was lacking in any sense of continuity. Rohmer corrects that here, utilizing two central characters introduced in Shadow, Sir Denis Nayland Smith’s right hand man, FBI Agent Raymond Harkness and Fu Manchu’s Number Two, General Huan Tsung Chao. 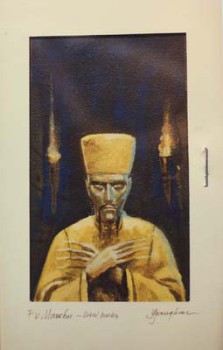 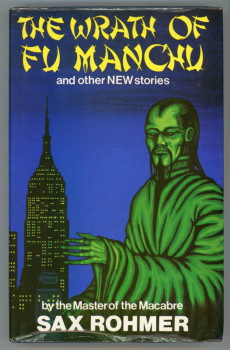 The return to a smoother prose style, a setting not limited to a single stage-bound set, and references to what has gone before are the two biggest advantages here. That said, Rohmer once again offers us a poor substitute for the venerable Erickson Ray. Last time around he replaced it with the Helson Lamp and here with the Runsen Beam. Pop culture enthusiasts may wish to note the plot this time concerns turning the Runsen Beam on Fort Knox to topple the U.S. economy. This story saw print seven years before Ian Fleming published Goldfinger. However, while Auric Goldfinger was working with the Communists in Fleming’s classic James Bond caper, the Si-Fan are continuing to operate against Communist China by attempting to blackmail the U.S. into cooperating with them in driving the Communists from power.

Admittedly, age still plays a significant factor. Rohmer celebrated his 69th birthday while the story was being serialized so it is understandable that when we first encounter Dr. Fu Manchu he is feeling weak and frail and contemplating his mortality. The reason for this within the story is that the Elixir Vitae that keeps Fu Manchu and his daughter from aging has run out and his servants are racing to obtain the various ingredients necessary to restore their Master to health. Peko, Dr. Fu Manchu’s pet marmoset, is likewise near death as we learn he is as old as his Master and likewise relies upon the elixir to survive.

While Fu Manchu’s fate hangs in the balance at his home in Cairo, his daughter Fah lo Suee is traveling to New York aboard an ocean liner under the guise of Mrs. van Roorden. Sharp-eyed readers may note that one of the passengers, Jenkins, shares a surname with Rohmer’s UK publisher at the time. While Herbert Jenkins represented a considerable come-down from his longtime UK publisher, Cassell at least they still printed his works in hardcover whereas he was relegated to paperback originals for Fawcett Books in the US by this point in his career. It should be noted, the third Sumuru thriller, Virgin in Flames which was published later that year, shares a nearly identical passage with this story involving a bit of subterfuge with secret documents hidden inside a walking stick.

Fah lo Suee is on her way to New York to attend a meeting of the Si-Fan’s Council of Seven as a substitute for her ailing father. We learn the Council attends their meetings incognito to protect the identities of the seven council members from their various international counterparts. The green devil masks of the title are those worn by council members at the meeting. Instantly, cult movie enthusiasts may now recognize where Harry Alan Towers hit upon the idea of Five Golden Dragons given none of the story elements of that Commissioner Sanders adventure originate with the character’s creator, Edgar Wallace. As in that mid-sixties Harry Alan Towers picture (whose storyline is virtually identical to Towers’ two mid-sixties films with Rohmer’s Sumuru character as played by Goldfinger’s very own golden girl, Shirley Eaton), the plot twist is that a dying agent manages to get his hands on one of the masks and passes it on to an innocent bystander. Through a series of near-death encounters, the mask and information pass to Sir Denis Nayland Smith enabling him to infiltrate the Council of Seven’s meeting.

The obvious short-coming here is that this intriguing story was not converted into a full-length Fu Manchu novel. There certainly is enough story material here to expand the narrative considerably. Fah lo Suee is still a slave to her feelings for Nayland Smith and desires to escape from her father and the Si-Fan. General Huan Tsung Chao is given greater relevance to the story as we learn he raised Fah lo Suee and bestowed her name upon her. He also acts to spare her from her father’s wrath and, honoring a bargain she has made, also spares Nayland Smith’s life.

As is often the case with Rohmer, the story elements come fast and furious and one wishes more pages had been alloted to fully appreciate this embarrassment of riches. As it stands, The Wrath of Fu Manchu reads like a fragment of a book that showed much more promise than one had reason to expect at this late date in a series Rohmer had been chronicling for forty years. Next week, we will examine the three short stories that followed Rohmer’s revival of the series in the mid-1950s once his literary rights were restored to him.

I have a copy of that DAW (not Zebra) edition of this book, but I’ve never read it. Now I might pull it down and give it a try.

Sheesh. You’d think I could read the cover of the book I placed as an illustration and see that it was Donald A. Wollheim. Zebra reprinted some of the series from their acquisition of the Pyramid paperback rights in the mid-1980s. I’m showing signs of senility again. Thanks, Bill.

I do stuff like that all the time. I have some of those Zebra and Pyramid editions, too. For some reason, I’ve always liked the Gold Medal Suburu books more than the ones about Fu Manchu. Maybe it’s my Gold Medal prejudice coming out.

The Len Goldberg covers for the Pyramid editions are my favorites. I found the Sumuru series very hit and miss. My least favorite by far was the first. My favorite was THE FLAME GODDESS (aka VIRGIN IN FLAMES) which was the only one to realize its potential as I saw it. I was always sorry Rohmer never finished the series. If you haven’t yet, read THE EMPEROR OF AMERICA at some point to see the first appearance of Drake Roscoe and the dry run for Sumuru.

Haven’t read it. I’ll look for it.