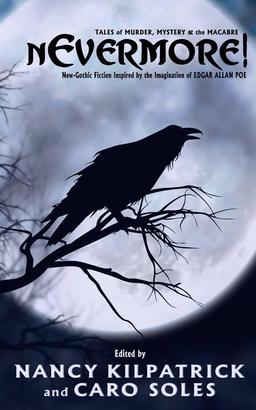 Nancy Kilpatrick’s previous anthologies include Evolve: Vampire Stories of the New Undead, Outsiders, and Tesseracts Thirteen. Her other books include The Goth Bible and her 2000 collection The Vampire Stories of Nancy Kilpatrick. Her most recent offering, co-edited with author Caro Soles (The Danger Dance), is a promising collection of original short stories inspired by the great Edgar Allan Poe.

nEvermore! Tales of Murder, Mystery and the Macabre is an homage to the great American writer, the incomparable Edgar Allan Poe, and a must-have for every fan of his work.

In addition to the 21 stories, the editors have also added an introduction, Contributor Notes, and two bonus items: a reprint by David Morrell, and an essay on Poe by Uwe Sommerlad.

BONUS #1 “The Opium―Eater” by David Morrell
Previously unavailable in print, now included here for the first time… “The Opium-Eater” by The New York Times bestselling author, David Morrell, recipient of three Bram Stoker awards, finalist for an Edgar and Anthony award, winner of a Nero and Macavity award, and recipient of the Thriller Master award from the International Thriller Writers organization.

BONUS #2 “Edgar Allan Poe, Genre Crosser” an essay by Uwe Sommerlad
This essay adds an historical dimension to nEevermore! as it enlightens readers to the fact that Poe’s oeuvre went far beyond his fame as a writer of dark fantasy and supernatural tales. This well-researched essay traces the powerful influence of Poe in the literature of other countries as well as in the English speaking world. Poe is the father of the modern mystery story, but Sommerlad shows that Poe’s reach extends to realms as diverse as science fiction and romance. Nevermore! is a blend of what Poe imagined, a genreless world of unique stories and re-envisionings.

nEvermore!: Tales Of Murder, Mystery & The Macabre will be published by EDGE Science Fiction and Fantasy Publishing on October 1, 2015. It is 271 pages, priced at $15.95 in trade paperback and $5.99 for the digital edition.