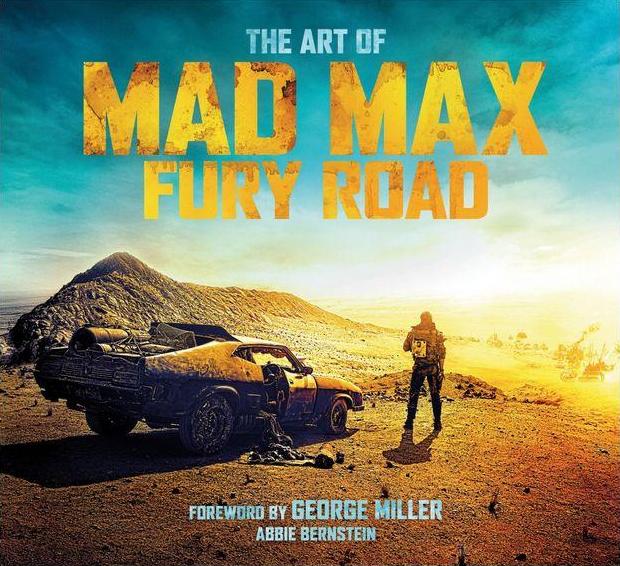 Mad Max: Fury Road was a highlight of the summer for me. It was easily one of the best movies of the year, and the long-awaited return to one of the great cinematic settings of my youth, the post-apocalyptic hell of The Road Warrior. It turned both of my teenage sons into Mad Max fans. No small feat, since in general they don’t show much patience with films from the 80s.

Titan Books released a gorgeous art book to accompany the release of the film, The Art of Mad Max: Fury Road, and it’s jam-packed with behind-the-scenes photos, concept art, production stills, interviews with the cast and crew, and an insightful foreword by director George Miller. I received a copy last month, and finally had a chance to sit down with it this week. The timing is actually pretty good, as the Blu-ray was released on September 1, and we re-watched the film at home last Friday.

Below are a dozen photos and art samples from the book. 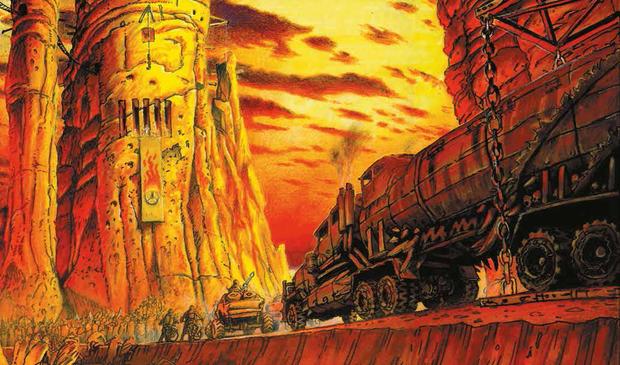 Click on any of the images for bigger versions. 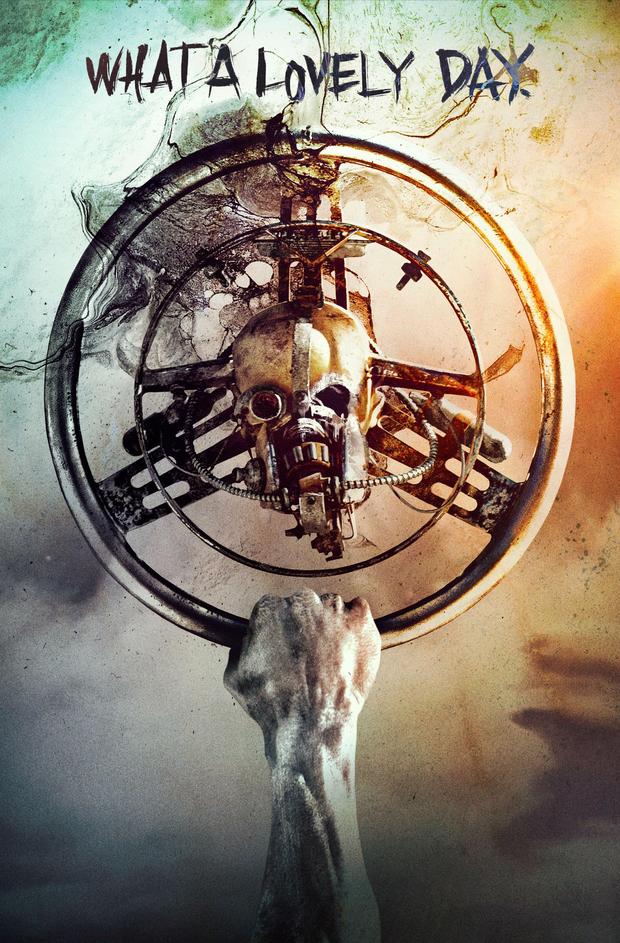 One of the surprising things I learned from the book was there was no actual screenplay for Fury Road — just storyboards (something which is more obvious in retrospective, given the small amount of dialog).

The cast and director used the storyboards to frame each scene, and comics artist Brendan McCarthy, who did much of the concept art, received a co-writing credit. 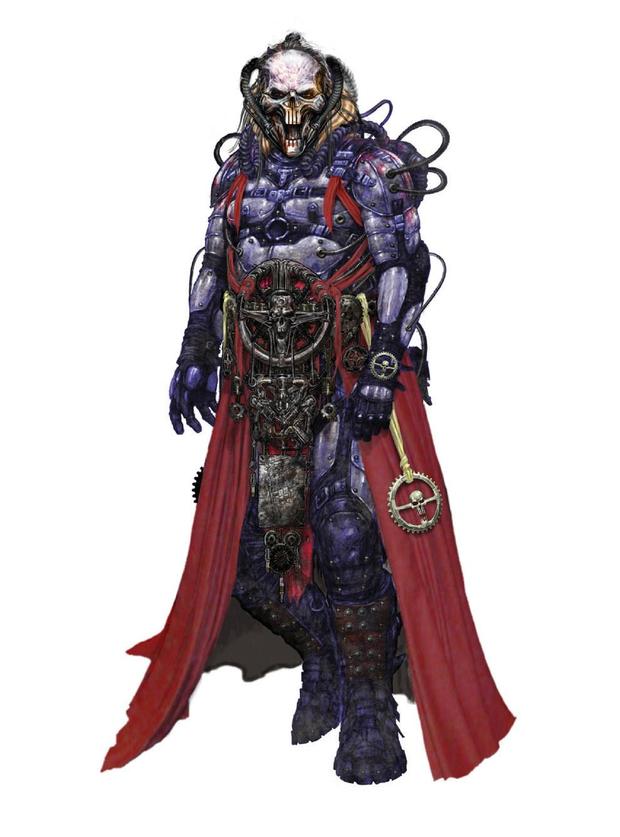 The book includes an enormous amount of concept art, which ultimately shaped the plot and narrative flow of the movie 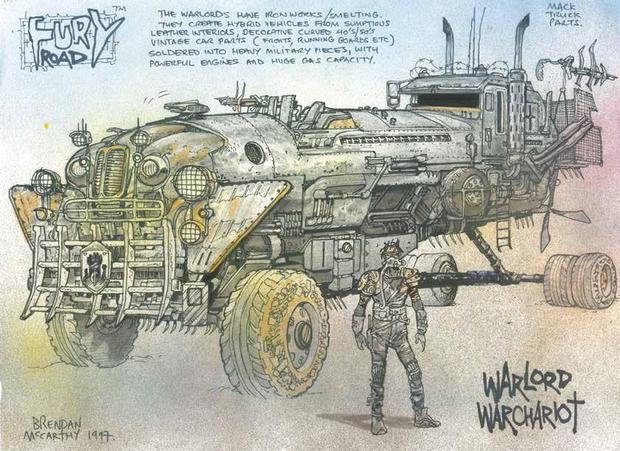 Long time fans won’t be surprised to learn that Mad Max: Fury Road had a very long gestation period, and in fact Miller began work on the film decades ago, hiring a team of talented artists to create a brand new vision of the vehicles, settings, and over-the-top characters for his ambitious new film.

In fact, virtually all of the concept art in the book, by Brendan McCarthy, Peter Pound, and Mark Sexton, dates back to the 90s, before the overall story arc for the film had taken shape. 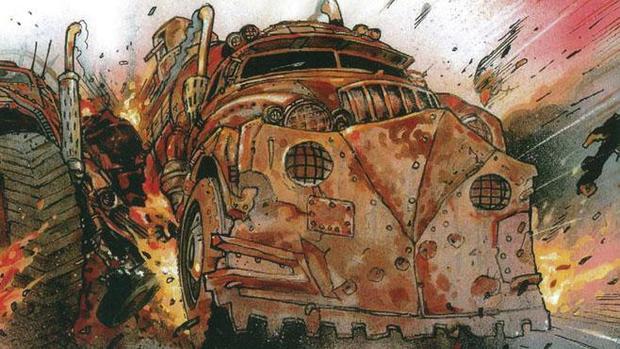 Much of the art centers on the cars, trucks, and cycles which feature prominently in the final film.

But I must admit that most of my favorite pieces center on the ruined landscape of the film, and Immortan Joe’s imposing citadel. 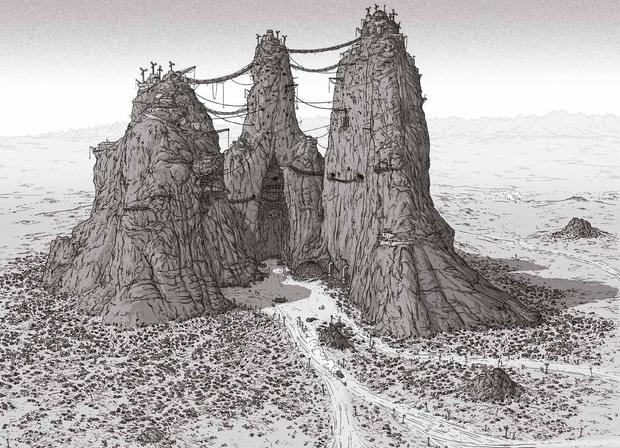 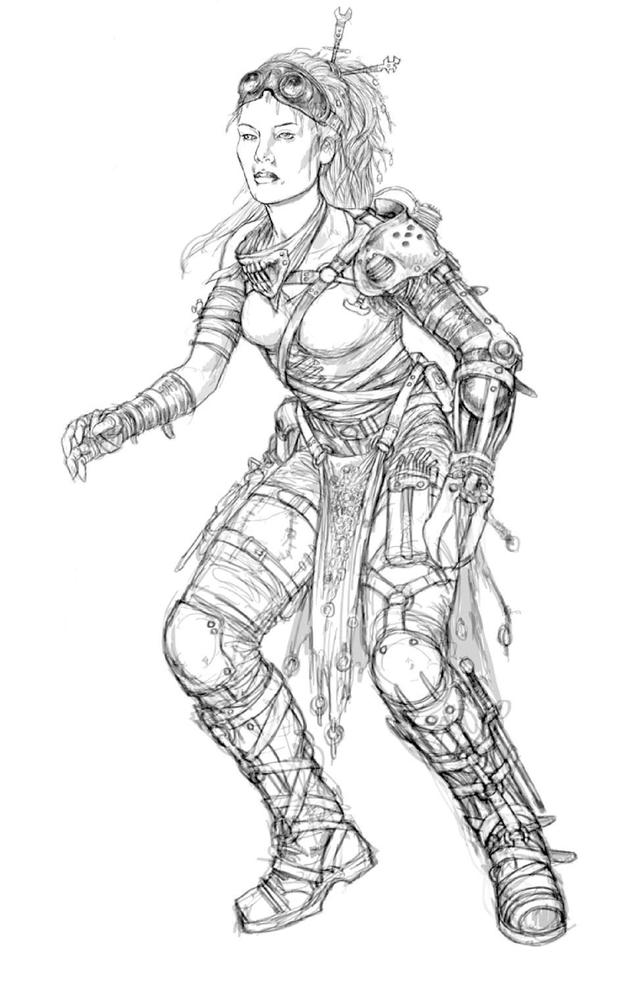 And the true star of the movie — the heavily-modified chase vehicles.

Teoh Yi Chie at art blog Parka Blogs has photographed over a dozen of the gorgeous double-page spreads, to give you a real feel for the book before you lay out your hard-earned money. Check it out here. 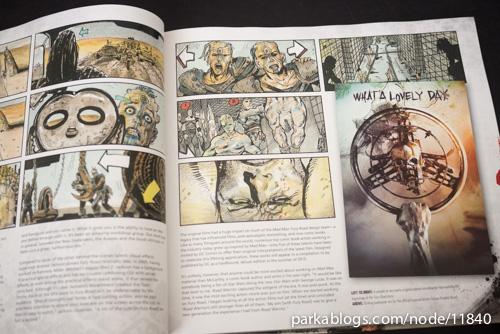 The Art of Mad Max: Fury Road was written by Abbie Bernstein and published by Titan Books on May 19, 2015. It is 176 pages in full color, priced at $39.95 in hardcover. There is no digital edition.

See all of our recent coverage of the best in new fantasy releases here.

Wow. This is fabulous. Thanks for sharing.

I haven’t watched the film as of yet, but I definitely want to sit and watch it at some point in my life. Perhaps I should rent it tonight or tomorrow night.

You’re most welcome, Rachel! Glad you enjoyed it.

I understand that the movie did ok box office, but no more than that. I’m really puzzled as to why it wasn’t an outright smash. (Hell, I saw it three times.) Was it just too long after the originals?

I’ve been watching the box office for this film pretty obsessively since it was released. Currently, it’s sitting at #15 for the entire year (ranked by domestic box office), as reported by Box Office Mojo:

[Its position will doubtless change as the year wears on, of course.]

When you include foreign take, FURY ROAD has a stellar Worldwide box office of $374,238,717. That puts it well ahead of at least a few films ahead of it on the domestic chart, such as Spongebob and Straight Outta Compton. That’s a smash in my book.

However… Straight Outta Compton cost only $28 million to make, and Fury Road’s budget was $150 million. I guess all those decades in development hell added up.

Still, it looks like Fury Road did quite nicely (especially when you consider that $374 million doesn’t include such things as Blu-ray and DVD sales, rentals, broadcast sales, etc.)

I’ve been watching so obsessively chiefly in the hope that Miller will get the chance to do the additional films in the series he’s talked about. I checked earlier today for word on the next one, and here’s what I found at Wikipedia:

In March 2015, during an interview with Esquire magazine, Hardy revealed that he was attached to star in four more Mad Max films following Fury Road. In May 2015, Miller told Wired magazine: “Should Fury Road be successful, I’ve got two other stories to tell.” Later in May, Miller revealed that plans for the sequel had changed and the next installment will be instead titled Mad Max: The Wasteland.

Will someone be reviewing the prequel comic books for Mad Max: Fury Road? They were released over the summer and the collected version was released at the beginning of September.

I bought the first one, but didn’t have the time to keep up with the whole series. We don’t have anyone scheduled to cover it, unfortunately.

Have you read them?

I haven’t read them yet. But they’re in my to-read pile.