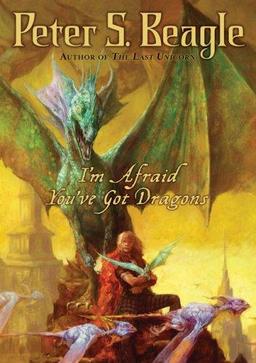 Peter Beagle is one of the finest living fantasy writers. His 1968 novel The Last Unicorn has long been considered a classic, and The Innkeeper’s Song (1993) and Tamsin (1999) were both nominated for the World Fantasy Award. His 2007 novel I’m Afraid You’ve Got Dragons isn’t as well known as some of his others, but it has its fans. It’s currently ranked at 3.88 (out of 5) at Goodreads, and it has five stars at Amazon.com. Beagle has drummed up a lot of interest in it over the years by reading chapters at various conventions (you can watch him do a public reading of the first chapter here).

I’ve been dying to get my hands on a copy myself. But that’s proven to be fairly tricky because, as it turns out, the book doesn’t exist.

I’m sure this has frustrated more than a few Beagle collectors, because it can take a while to figure this out. Even the Internet Speculative Fiction Database thinks this book exists. And, as far as I know, Amazon and Goodreads aren’t generally in the habit of listing books that don’t exist. But trust me. This ain’t a book.

The closest I’ve come to finding an explanation is this brief note at the bottom of an excerpt from the novel at Green Man Review, quoting a defunct section of Beagle’s website:

The story was originally supposed to be a 40,000 word novella, no longer. But it grew. The first draft came in at more than twice that: nearly 90,000 words… I’m Afraid You’ve Got Dragons was originally contracted to Firebird Books, and announced for a Summer 2007 release — but completion of the final draft was delayed as the manuscript insisted on growing, and because of time lost to unavoidable family issues, so the book was rescheduled for Summer 2008. Before it could be turned in, however, a serious business conflict came up between Peter and Penguin USA over the 40th Anniversary Edition of The Last Unicorn. This ultimately led Peter to conclude that after many years of association with Penguin imprints it was time to move on. Since Firebird was a Penguin imprint, that meant pulling I’m Afraid You’ve Got Dragons.

The site also notes that publication is likely in 2008 or early 2009 from Conlan Press, where “Peter will have the control over the book that he wants.” But that never happened.

Ironically, a part of the reason I was fooled into thinking this book actually existed for so long was the existence of reader reviews at multiple sites. But a closer look at those reviews just confirms the dismal truth. Here’s the sole 5-star review at Amazon:

Never Published, March 1, 2009
By K. Howard “Kit”
This review is from: I’m Afraid You’ve Got Dragons (Hardcover)
When this book first appeared in catalogues, I tried to order it. After some effort, I spoke with the publisher, who said that Beagle had withdrawn the book and it was never published. What a terrible shame! With that content summary, it would have been a fantastic Beagle story. Hopefully he will reconsider.

And the sole community review at Goodreads:

Book was withdrawn from release and put on hold indefinitely.

And there you have it. As far as I know, the book is not currently scheduled to be published any time soon.

Here’s a look at the gorgeous wraparound cover by Justin Sweet, if that’s any consolation. 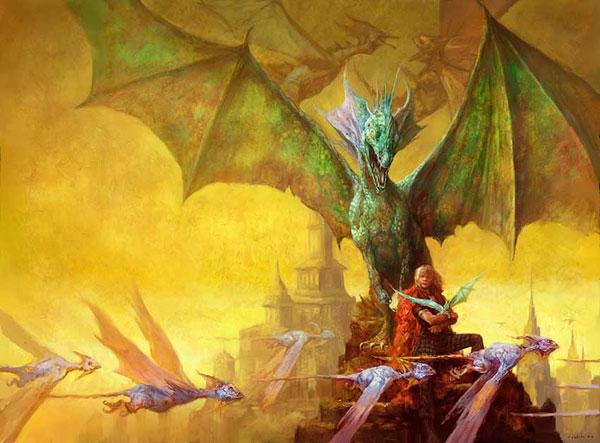 I’m Afraid You’ve Got Dragons was not published by Puffin / Penguin Books in August 2007. It is 224 pages in hardcover, priced at $11.99 in hardcover (which doesn’t exist). There is no digital edition, and if there were, I bet it wouldn’t exist either. The cover is by Justin Sweet.

It took me years to realize Buttercup’s Baby doesn’t actually exist. On multiple occasions while I was married I tried to get it for my then-husband for his birthday or Christmas.

A true story. But William Goldman did write at least one sequel (of sorts) to THE PRINCESS BRIDE, a slender novel called THE SILENT GONDOLIERS (published under the name S. Morgenstern). Worth a read for fans.

…What? But- that-
*sigh*
That explains so much…
and also means I can take it off my birthday wish list instead of having it there for the sixth year in a row.

Yup. Having this book on my Amazon wish list for literally years is what finally goaded me to investigate.