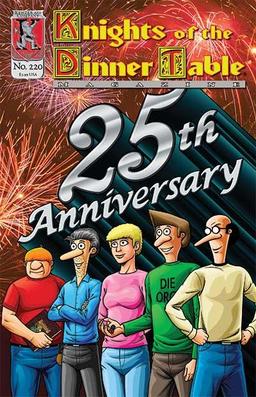 Actually, issue #220 of Knights of the Dinner Table has been on sale for a couple months now, and I missed it. I just found out it was the 25th Anniversary issue, and now I’m doubly embarrassed.

Twenty-five years ago, Jolly Blackburn created the Knights of the Dinner Table comic to fill an unexpected one-page hole at the back of his gaming magazine Shadis. Today, the Knights of the Dinner Table headline one of the longest-running independent comics in history, and they also feature in board games, card games, t-shirts, and even an independently produce live-action series.

But the heart of the KoDT publishing empire remains the monthly comic, dedicated to the misadventures of a group of misfit gamers from Muncie, Indiana. It is written and drawn by my friend Jolly R. Blackburn, with editorial assistance by his talented wife Barbara. Black Gate readers may remember the KoDT spin-off The Java Joint, which appeared in the back of every issue of BG (and was eventually collected in a single volume in 2012).

In addition to Jolly’s hilarious comic strips, Knights of the Dinner Table Magazine is packed with gaming columns of all kinds, keeping you informed on the latest and greatest in the industry. KoDT 220 has no less than 11 full-length strips, plus some short “One-Two Punches.”

“Muncie, We have a Problem” – Casualties from the Pwn Brian Express are piling up and Pete looks for a healer
“Rumblings” – Pete counts up his earnings during a break, and Bob and Dave are trying to track down Gary Jackson
“GM Huddle” – Exhausted GMs Patty and B.A. commiserate
“The Croutons Have Eyes” – Bob tries some stealthy maneuvers to get to Gary Jackson at lunch
“The Meat Hopper” – Gary continues to revel in slaughtering player characters
“A Pearl Before the Whine” – Gary Jackson makes a surprising and decisive move against Carvin Marvin
“One-Two Punches”

Cries from the Attic: Editorial of a Madman: Twenty Five Years Ago This Month by Jolly Blackburn
Table Talk: Our Readers Talk Back
Weird Pete’s Bulletin Board
Back Room at the Games Pit
Parting Shots

We last covered Knights of the Dinner Table Magazine with issue #219.

Thanks for the heads up, will check at the comic shop when I pick up my Conans. I miss KILL, loved the comic format folowed by the strip stroy that prompted it.
@greengestalt – Hoody hoo indeed:)

This is no longer the latest issue, but the local game shop near me always stocks back issues.

No worries John, I am other side of the Atlantic so it is prob still a new arrival here.

Definitely will pick this up. I’ll buy two for my buddy, Bob, who introduced me to them.

Shadis Boy, do I miss Shadis! Partly for Knights of the Dinner Table But also for all the good gaming material in each issue.

I know exactly what you mean. For some years, it was my hands-down favorite gaming magazine. It made gaming exciting and fun again.