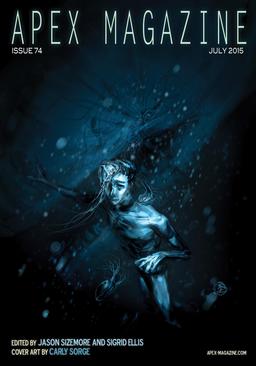 Congratulations to Ursula Vernon, whose story “Jackalope Wives” (Apex 56) won the Nebula Award for Best Short Story! Charlie Jane Anders at io9 called it “the most beautiful story I’ve read in ages.” Check it out here.

Columnist Charlotte Ashley reviews the Hugo Award short fiction nominees this month in her short fiction column in Apex #74, and she address the controversy head on:

I will not be coy and pretend I do not know that the contenders for this year’s Hugo Awards are controversial. The nominees in, especially, the short fiction categories have mostly been drawn from the “Rabid Puppies” slate: stories chosen to reflect the values of a vocal ideological minority in fandom, often published by them directly. These are stories that were largely unfamiliar to most readers of speculative fiction until very recently.

I intend to vote in the Hugo Awards, and while I am well aware that voting “No Award” in the face of a slate offered in bad faith is an option preferred by many of my peers, I prefer to make my decisions armed with well-informed reasons for my choices. I have opted to read the slates with a generous attitude, to determine for myself if there are any hidden gems in the corners of SFF that I have unfairly overlooked.

“On A Spiritual Plain” by Lou Antonelli (Sci Phi Journal #2) is definitely not that gem. This is a straight-forward piece about a Methodist minister posted to a remote outpost on the planet Ymilas. The local aliens are a “low-tech highly-ritualized” people who live alongside the ghosts of their dead, called “Helpful Ancestors.”…

Editor-in-Chief Jason Sizemore nicely summarizes the delights and surprises in store this issue in his editorial:

This month we have an edgy SF exploration of gender and sexuality in Rich Larson’s “Going Endo.” I suspect the story might not be to the tastes of some readers… It’s like Larson has tapped into a David Cronenberg hallucination.

In A.A. Balaskovits’s provocative story “All Who Tremble” the author paints the page with dark imagination. It has the feeling of a fairy tale in voice and style, but only if fairy tales are strange and dark and twisted. “Never Chose This Way” by Shira Lipkin makes a nice bookend to Larson’s “Going Endo.” When you’ve read both, you’ll understand what I mean.

Our reprint this month is “The River” by adrienne maree brown. We have a fascinating near-epic poem named “How the World was Made — A Super Crown” by Roger Bonair-Agard. Charlotte Ashley reviews the Hugo Award short fiction nominees. Andrea Johnson interviews Rich Larson about “Going Endo.” Russell Dickerson interviews our cover artist Carly Sorge. Finally, Mark Allen Gunnells returns with his essay “How Horror Made Me More Empathetic.”

We have two excerpts this month. The first is from the hilariously titled The War Against the Assholes by Sam Munson. The other is by a name familiar to readers of this magazine… For Exposure: The Life and Times of a Small Press Publisher by Jason Sizemore.

The War Against the Assholes by Sam Munson (eBook/subscriber exclusive)
For Exposure: The Life and Times of a Small Press Publisher by Jason Sizemore

“Words from the Editor-in-Chief” by Jason Sizemore
“How Horror Made Me More Empathetic” by Mark Allan Gunnells
“Apex Author Interview with Rich Larson” by Andrea Johnson
“Apex Cover Artist Interview with Carly Sorge” by Russell Dickerson
“Clavis Aurea: A Review of Short Fiction” by Charlotte Ashley

Apex Magazine is a monthly science fiction, fantasy, and horror publication featuring original short stories, poetry and non-fiction. It is edited by Jason Sizemore and Sigrid Ellis, and released the first Tuesday of every month. In 2012, 2013 and 2014, it was nominated for a Hugo Award for Best Semiprozine.

Apex Magazine is published by Apex Publications. Issues are available free online, and sold for $2.99 in a variety of digital formats. Subscriptions are just $19.95 for one year (12 issues) in EPUB, Mobi, and PDF formats.

This issue’s cover is by Carly Sorge. The complete issue is here, and you can buy back issues or subscribe at their website.