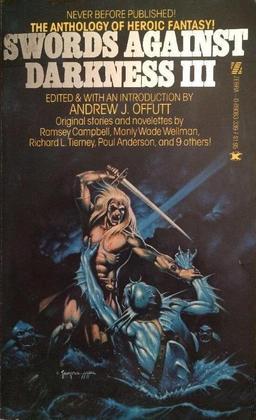 Nearly seven years ago, Bill Ward wrote “On Thud and Blunder — Thirty Years Later,” one of the first articles ever posted at BlackGate.com. Here’s what he said, in part.

It’s been thirty years since Poul Anderson wrote his essay on the need for realism in heroic fantasy, ‘On Thud and Blunder,’ which you can read in its entirety at the SFWA site, and I think it holds up well even though the genre — and the perception of it — has changed greatly. ‘On Thud and Blunder’ originally appeared in the third installment of Andrew Offutt’s classic anthology series Swords Against Darkness; though it was in the excellent, if unimaginatively named, collection of Anderson’s called Fantasy that I first encountered it. But already at the time of my reading a whole generation of writers had made a name for themselves by following the dictates of realism and common sense in designing their fantasy worlds.

The essay begins with a satire of the genre that features a barbarian cleaving through armor with a fifty-pound sword and riding a horse as if it were a motorbike, among other ridiculous things. It’s the kind of thing that gave heroic fantasy and sword and sorcery a bad name, and perhaps the sort of thing that meant it would soon be eclipsed by a rising tide of ‘high fantasy’ in the eighties and nineties. But, in 1978, hf — as Anderson terms heroic fantasy in an abbreviation that seems to have never caught on — was an emerging star.

In the Comments section, James Enge wrote, “Thanks for this: I’m a big Anderson fan and it’s a pleasure to reread this article… it’s still the authentic points of concrete imagination that strike deep, and Anderson was a past master at those.”

Read the complete article here. We’ll be presenting more classic articles from BG‘s rich history over the next few months.

I’ve loved that essay for a long time, knowing about it well before this site posted it.

However, it’s taken too seriously, as a hard rule versus a guideline. Granted poor research where its needed can hurt a story. Then again Burroughs never went to Africa – or Mars for that matter. I’m talking ERB not WSB, the latter DID go to Africa slumming in Tangiers at least and the stuff he did and wrote…let’s not go there.

Frankly I’ve seen about every “How to write Fantasy” being little more than an expansion of that essay. Lots of the reason I have trouble getting into modern stuff is the flood of “I wanna be the next Tolkien, whoops George Martin” and this essay meets online RPG plot/world generators.

When all is said and done, all that matters is the story and how you can pull it off. One of the ancient tests for bards (of the storytelling tradition) was to make up the biggest lie imaginable and pass it off as truth, the bigger lie you could put out and pull off the more status. Done properly, poor ol Gnorts could wield a 50lb wet NOODLE and the story would be good and exciting.

How about for instance “Final Fantasy 7”? I could imagine Mr Anderson in his last years seeing kids playing that game – “I’ll ignore the big eyes, if that young Cloud fella is strong enough to use that sword without breaking his back, why don’t he just use a War-Hammer?” – but if he watched the story unfold, essentially a lad growing up and learning love and loss amidst an otherworld that mirrored our own millenial and enviornmental and social fears, IMO he’d have grabbed his typewriter and hammered out something. (RIP Mr Anderson)

The thing to realize is that all the Orcs, Elves, Ray Guns, Rocketships, Barbarians, Magic Swords, Kidnapped Princesses, Evil Asian Overlords, Tiny men with furry feet, etc. are like paints and markers. You paint a picture, grand or simple, fantastically complex or symbolic. Except you can also do what it takes animation to do with a brush, go forwards and backwards, with words painting a grand experience.

But what is it being painted?

This is nothing and everything.

2. A wonderful watercolor image of a landscape, plein aire painted…

3. A comic book, be it a formulaic superhero one or some bizzaro underground.

What IS the story? What is being said, beyond the surface – if ANYTHING…? Sufi Wisdom stories supposedly have at least 5 layers of meanings, for instance.

Poul Anderson was a great voice, and btw if you look up the wiki page he did have ‘themes’ in his works. This article is good, in that you should research your subject enough to avoid the ridiculous – but then to focus on the story, not some ‘realism’.

One of my characters is a 1700s adventurer, created in a fit of foaming rage after seeing the Solomon Kane movie – Of course I’ve done lots of basic research, having access to far more info than REH ever had. But I won’t have 100 pages explaining everything and a big author’s page about how I researched. Matter of fact I might toss some “Inconsistencies” in very carefully to see if anyone’s watching, for fun. The story will be the dark of the night, the ignorance and fear, the end of the middle ages and the ongoing ‘age of reason’ breeding its own monsters that lurk over the horizon.

Mr. Ward seems to take a very optimistic stance on the realism of current fantasy (high and low). In which case, he may wish to examine Diana Wynne Jones’s A Tough Guide to Fantasyland, which includes an article on horses that sounds suspiciously like Mr. Anderson’s take on horses as “a kind of sports car”. Actually, I suspect Mr. Ward has read Ms. Jones, since she calls out “horses as motorbikes” in her work.