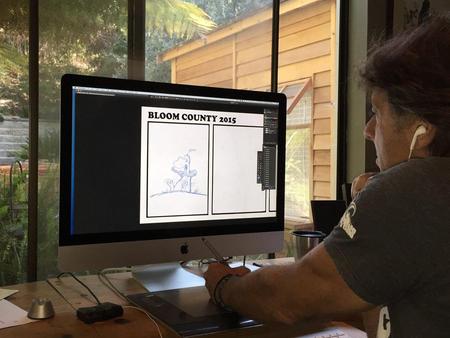 Berkeley Breathed, creator of the Pulitzer Prize-winning comic strip Bloom County, posted the enigmatic image at left on his Facebook page, showing him working on a new Bloom County strip, with the caption, “A return after 25 years. Feels like going home.”

Bloom County, one of the finest comic strips of the 20th Century, ran from December 8, 1980 to August 6, 1989. It featured a great deal of political satire and commentary on pop culture, and introduced the characters Bill the Cat, 10-year-old newspaper reporter Milo Bloom, the completely moral-free attorney Steve Dallas, and Opus the Penguin. Breathed ended the strip in 1989 to focus on a Sunday-only comic, Outland, and later a number of best-selling children’s books, including A Wish for Wings That Work: An Opus Christmas Story (1991), The Last Basselope (1992), Goodnight Opus (1993), and Mars Needs Moms! (2007), adapted into the Disney flop of the same name produced by Robert Zemeckis in 2011.

Breathed has not elaborated the exact meaning of his comment, but it seems pretty clear he’s returning to Bloom County in some fashion (and within hours of his post, speculation had already begun to spread that that’s exactly what he’s doing, in places like the A.V. Club and Comic Book Resources.)

However, there are some clues in the comments. Donald Trump, who was frequently the butt of Breathed’s jokes, and who played a role in the demise of the original strip (the final storyline featuring Trump buying out the strip and firing all the characters, forcing them to find jobs in other comic strips), is now running for President. Asked directly in the comments if Trump’s campaign had any influence on his decision to return, Breathed replied “This creator can’t precisely deny that the chap you mention had nothing do with it.” Stay tuned for additional details.