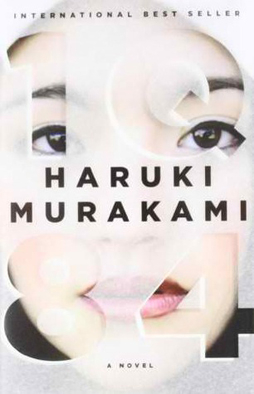 The first two books of Haruki Murakami’s 1Q84 were published in Japan in 2009, with the third following in 2010. Plans for a one-volume English edition were soon underway, with the first two books translated by Jay Rubin and the third, due to time pressures, by J. Philip Gabriel. The complete English edition, running over 900 pages despite the editing-out of some extended recap passages in the third book, appeared in 2011.

And many American reviewers were disappointed, with some baffled by what they perceived as the book’s surrealism, and others complaining that not much seemed to happen in all those pages. Personally, I was engaged with the book’s dreamlike character. I find the sensibility not far from a lot of Japanese fantasy — consider the startling images produced by Hayao Miyazaki (Spirited Away, My Neighbour Totoro) or even Osamu Tezuka (Metropolis, Astro Boy). That’s not to say that they’re of a piece with Murakami any more than Walt Disney and Jack Kirby are of a piece with, say, Jonathan Lethem; but if a culture has a hand in shaping the art produced by artists from that culture, then perhaps culture also shapes the way the fantastic is used within art, whether in the choice of images or in the way those images are interrogated. Which is to say that the use of fantasy is part of the tension between tradition and the individual talent.

Certainly 1Q84 is not a realist novel, and the characters don’t operate along realist lines. Throw away realist preconceptions, though, and there’s a consistency to their behaviour and to the strange worlds in which they find themselves. In fact, I find there’s a kind of familiarity at the core of the book, a concern with archetypal patterns enunciated by Joseph Campbell, by Jung, and especially by Sir James Frazer in The Golden Bough. This only becomes clear about halfway through the whole work, which may explain the confusion of some readers. Much of the rest of the novel is dedicated to character analysis and flashbacks, which build an elliptical series of connections. In all it’s a kind of hero’s journey told in a restrained, neutral voice that delves deep into personal histories to uncover a Lynchian mix of strangeness and darkness. And the whole thing resolves with a rightness that suggests, to me, that Murakami’s found the psychologically correct way through his world of 1Q84. 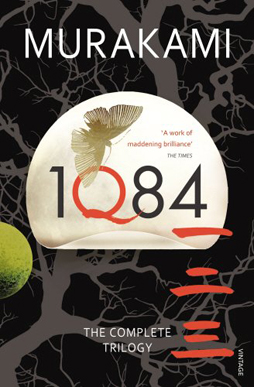 And a distinct world it is. The book opens in the year 1984 with Aomame, an efficient woman who steps out of a normal road and finds herself in a kind of parallel world — or, more precisely, a world that has changed to something different than what she knows (for there is only one reality, or so we’re told). For the moment, she goes about her work. And we soon find out that she’s a private assassin who kills sex criminals. Her story alternates with that of Tengo, a teacher and aspiring writer. He’s contacted by an editor he knows who’s hatched a shady scheme: a young woman, unknown to the publishing industry, has submitted a novel to a competition for new writers, a competition judged by the editor, Komatsu. Sensing a raw power in the text, Komatsu wants to hire Tengo to rewrite and polish the story, turning it into something good enough to win the top writing prize in Japan. The two men will keep their involvement in the scheme quiet, and have the writer, seventeen-year-old Fuka-Eri, take all the credit for the work. Tengo agrees, but strange things develop right away, with the oddly affectless Fuka-Eri not least strange. She comes from a bizarre cult; and it’s possible that the fantasy she’s written, about magical Little People who emerge from the dead, is not entirely unreal. Slowly, Tengo and Aomame’s stories draw together, as the truth about the cult and the Little People emerge.

It sounds like a lot of plot, but strung over hundreds of pages it unfolds in a leisurely way — although with an odd rhythm, so that important story information’s passed along quickly while descriptions of a minor character may take up pages. At any rate, it eventually becomes clear that the book’s a love story, and that Aomame and Tengo, who met briefly as children, are moving toward each other in the strange otherworld that Aomame calls 1Q84. This isn’t really a novel of suspense, for all the occasional violence within it, but more a novel of gradual understanding — we, like the characters, slowly come to understand more and more of what we see and the connections between things. 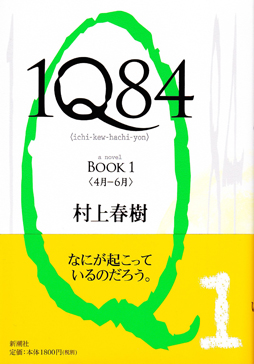 The number 9 is pronounced in Japanese much like the English ‘q,’ which here stands for ‘question.’ Aomame questions the world she’s in increasingly deeply as the book goes along, and finally gets key answers from the leader of the cult which produced Fuka-Eri. At which point we meet Frazer’s familiar ritual story of the king beloved by the goddess who is slain by his successor that the cycle of the year may keep turning. In this case, of course, the year happens to be 1984: George Orwell meets Apocalypse Now. The assassin seeks out the king who must die, and the rhythm of the (imagined) agricultural ritual year lives on in an industrialised world.

Murakami’s said (in an interview with The Guardian) that he had “long wanted to write a near-past novel similar to George Orwell’s futuristic novel 1984.” The title of the book emphasises the dialogue with Orwell, but it’s also only one in a long series of references both to Japanese and Western artists. I find that one effect of these references is to situate the story specifically in time — not just in the specific year of 1984, but in a world where time and the forward movement of time is significant. In which traditions develop, rather than circle around with the seasons.

To me, that’s the tension of the book: rhythm versus the linear. On one hand the hero-king who is killed by a successor who will be killed in turn. On the other the hero (or heroine) who journeys into a strange place and returns. In 1Q84 Aomame and Tengo both find their separate ways into what is called another world. It’s actually the same world as the one where they begin — “there’s always only one reality” — with the same people in it, the same society and geography, but a slightly different history and a second moon in the sky. In this other world, the two protagonists seek for things, and then try to emerge. That’s much like Campbell: the hero sets out from their normal life, enters an otherworld, finds a quest-object, and returns. But Murakami’s wiser than that. The world Aomame and Tengo emerge into isn’t quite the same one they originally left. The hero’s journey changes the world, which itself is always in the process of changing. 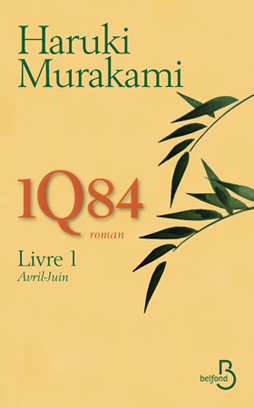 The book effectively balances and integrates archetypal patterns of ritual and myth with the industrial world — with the modern experience of school and work and sex and death. Step a bit out of the ordinary — walk off a busy highway through a disused tunnel, as Aomame does, or agree to a shady business proposition, as Tengo does — and you find yourself dealing with the fantastic, which pulls you toward the round of life and death. Keep going through that, and you can find the thing you always wanted and perhaps make it back to a changed world. To a new world that’s been given new significance.

In that last, 1Q84 is like that other long novel first published as three books, The Lord of the Rings. You can’t really go home again. You never return to the same place you started from. Life is change, and change can be shaped into a story. It’s certainly possible to see the story of 1Q84 as a metaphor for any number of things — art, religion, childbirth and the change of generations. Insofar as it’s dreamlike, it seems to me to be getting at the (or at least a) deep structure underlying dreams. But it clothes that dream in history and the detail of lives lived in the (or at least a) waking world. I think it resolves the tension nicely.