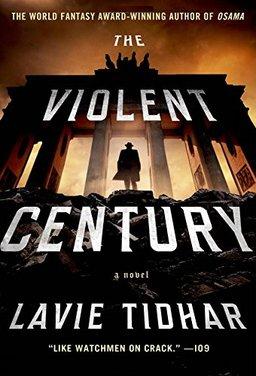 Lavie Tidhar’s last novel, Osama, won the World Fantasy Award, and his “Guns & Sorcery” novella Gorel & The Pot Bellied God won the British Fantasy Award. His novel The Violent Century was published in the UK last year, and was called a masterpiece by both the Independent (UK) and Library Journal — and “Watchmen on crack” by io9.

An unusual amount of praise for a superhero novel. Earlier this year The Violent Century was released here in the US, and we finally have a chance to see what all the fuss is about.

They never meant to be heroes.

For seventy years they guarded the British Empire. Oblivion and Fogg, inseparable friends, bound together by a shared fate. Until one night in Berlin, in the aftermath of the Second World War, and a secret that tore them apart.

But there must always be an account… and the past has a habit of catching up to the present. Now, recalled to the Retirement Bureau from which no one can retire, Fogg and Oblivion must face up to a past of terrible war and unacknowledged heroism — a life of dusty corridors and secret rooms, of furtive meetings and blood-stained fields — to answer one last, impossible question:

What makes a hero?

We last covered Lavie Tidhar with a look at the omnibus edition of his steampunk trilogy The Bookman Histories from Angry Robot.

The Violent Century was published by Thomas Dunne Books on February 24, 2015. It is 362 pages. priced at $25.99 in hardcover and $12.99 for the digital version. The cover was designed by Ervin Serrano. The US edition contains an exclusive Author Q&A, and a brand new short story, “Aftermaths,” set some time after the end of the novel.

I’m sure it’s a fine book, but a dozen pages in, the POV writing style so bothered me I quit it and took it back to the library. Too bad, because I liked the Bookmen novels a lot.

Sorry to hear that. I bought a copy last month, and I hope to give it a try this weekend (after I finish the Nnedi Okorafor books). I’ll let you know what I think.