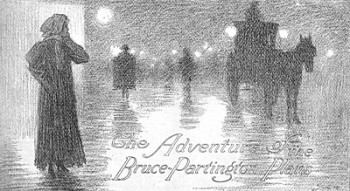 Solar Pons is, of course, the next best thing to Sherlock Holmes (which you know because you read THIS post, right?). I’m a Pons fan and I run www.SolarPons.com, the only website dedicated to The Sherlock Holmes of Praed Street.

Along with my two free, electronic newsletters (The Solar Pons Gazette and Baker Street Essays), the heart of the site is a collection of (non-spoiler) case commentaries for August Derleth’s stories. Some day, it will also host commentaries for the Basil Copper pastiches.

One of the many projects on my ‘To Do’ list (which might as well be Wish list) is to write case commentaries for the sixty Holmes stories written by Sir Arthur Conan Doyle. I’ve done one (woohoo!!!). First, if you haven’t done so, you really, really, really (I mean, really) need to read “The Bruce Partington Plans.” It’s a short story; won’t take long. And the rest of this post will actually mean something to you.

Each case commentary includes a non-spoiler preview of the story, some notable quotes, and a plethora of miscellaneous observations and comments. I’m probably in the minority, but I think there is some good stuff below and you’ll know a bit more about the story after you read it. So, come, the game is afoot!

The body of Arthur Cadogan West, a clerk at the Woolwich Arsenal, is found beside the Underground tracks near the Aldgate Station. Apparently West has stolen the plans for the experimental Bruce-Partington submarine and only seven of the ten pilfered pages are found on his body. In an espionage case with grave international consequences, Holmes pursues the German master spy, Hugo Oberstein, with his brother Mycroft playing a major role. 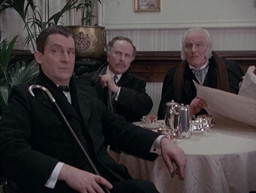 Holmes: Mycroft has his rails and he runs on them. His Pall Mall lodgings, the Diogenes Club, Whitehall – that is his cycle. Once, and only once, he has been here. What upheaval can possibly have derailed him? A planet might as well leave its orbit.

Mycroft: You must drop everything, Sherlock. Never mind your usual petty puzzles of the police-court.

Mycroft: Give me your details, and from an armchair I will return you an excellent expert opinion. But to run here and run there, to cross-question railway guards, and lie on my face with a lens to my eye – it is not my métier. (Hmm, reminds me of Nero Wolfe)

Mary Money was a young, unmarried female clerk found dead in a tunnel, apparently thrown from (or otherwise helped off of) a train, in 1905. Her killer was never found and it is quite possible that Sir Arthur Conan Doyle discussed this unsolved mystery as a member of The Crimes Club (which you already know about because you read every Public Life of Sherlock Holmes post, right?).

Thus, it is no surprise that we find elements of this murder in the “Bruce Partington Plans,” as Cadogan West is a young, unmarried clerk, found dead next to the tracks, apparently fallen from a train.

– August Derleth clearly borrowed the specifics of the Mary Money murder (page 21) for the December 14, 1919, entry in “From the Notebooks of Dr. Lyndon Parker.” This Solar Pons pastiche can be found in A Praed Street Dossier.

– In June, 1894, The Strand featured Arthur Morrison’s tale of Martin Hewitt, “The Adventure of the Dixon Torpedo.”  The story involved the theft of top secret plans, this time for a torpedo, not a submarine. A superficial evaluation might lead one to think Doyle had ‘borrowed’ Morrison’s idea and used it in “The Bruce Partington Plans.”

Except for the fact that Doyle was actually drawing on his own work. In October and November of 1893, The Strand presented Holmes in “The Adventure of the Naval Treaty.” Which, you guessed it, involved stolen top secret government documents.

“The Naval Treaty” was the last story before Doyle shocked the world by (seemingly) sending the world’s only private consulting detective off a cliff into the Reichenbach Falls in “The Adventure of the Final Problem.”

“The Dixon Torpedo” was part of the 1971 British television series, The Rivals of Sherlock Holmes, and is included on set one of the DVD. Oddly, this episode does not actually include Hewitt.

– Mycroft Holmes, Sherlock’s more brilliant elder brother, is a major player in this tale. Holmes had revealed little of Mycroft to Watson during their first meeting, which occurred in “The Greek Interpreter.” However, here, Holmes intimates Mycroft is a very important person. What else could one make of such phrases as “occasionally he is the British government,” and “he remains the most indispensable man in the country”?

– Hugo Oberstein seems to be a bit inept as far as master spies go. Holmes, after carefully searching Oberstein’s recent lodgings for an hour, has found nothing. However, the last item Holmes looks at is a tin cash box. One would think a box he has to “prise open” would have been examined a little earlier, but whatever.

Fortunately for Holmes, Oberstein has left a rather complete record behind by considerately stuffing an envelope with all of the agony column advertisements used in communication with his accomplice in crime. 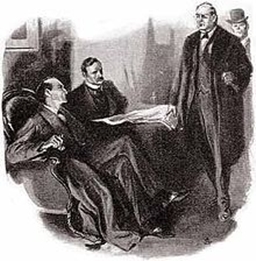 Why in the world would Oberstein remove all possible incriminating evidence, but neglect this rather damning bit? What could possibly be a reasonable explanation?

Outright stupidity would preclude his becoming a master espionage agent in the first place, so we will rule that out.

The only moderately viable one that comes to mind is that Holmes was actually led to Colonel Valentine Walter through some means that could not be revealed publicly.

Perhaps an important personage would be exposed, or political complications prevented the truth to be told. Watson needed to somehow explain how Holmes could bait the thief to come to him.

So, he fabricated the newspaper clippings, thus moving the account forward within the limitations he was working under. This seems more likely than Oberstein’s colossal gaffe.

– Arthur Twidle illustrated this story for The Strand (Sidney Paget having already passed away). He drew the scene where Mycroft visits Baker Street, depicting Holmes and Watson seated as the senior Holmes enters, Lestrade visible behind him. The illustration’s caption reads, “The tall and portly form of Mycroft Holmes was ushered into the room.”

Mycroft looks like nothing so much as a sharp-nosed penguin in this drawing (This is not a critique of Twidle, whose illustrations are quite good, especially his depiction of Watson). One can picture him in the black and white outfit of a penguin, waddling into the room. For me, I had this image immediately and have never gotten it out of my head when reading the story. 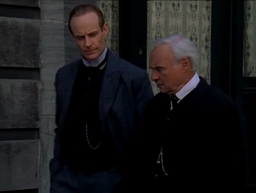 There is a definite resemblance between this drawing and Robert Morley, the actor who portrayed Mycroft in A Study in Terror. Morley may be best known as playing Katherine Hepburn’s brother in the classic, The African Queen, though he died very early in the film.

– Lestrade offers a perfectly reasonable explanation, which, as Holmes says, “holds together.” But Holmes dismisses it by saying that the case would be over. And Mycroft simply says, “All my instincts are against this explanation.”

Since Lestrade’s theories pretty much always contain major flaws, it is odd to see him dismissed quickly when he comes up with a viable solution.

– So, Mycroft tells us that the Bruce Partington submarine is “the most jealously guarded of all government secrets.” This is only a few moments after stating that he “thought everyone had heard of it.” This isn’t exactly brilliant dialogue. It seems more likely to have been uttered by Nigel Bruce’s Watson than Holmes’ brother.

– The Royal Scandal is the third (and far and away the best) of Matthew Frewer’s four turns as Sherlock Holmes. The engaging plot combines elements of “A Scandal in Bohemia” and “The Bruce Partington Plans.” This is even carried so far as to include Cadogan West, albeit a more sinister version. Most Sherlockians denigrate the Frewer films, but The Royal Scandal can stand with much of Jeremy Brett’s work.

[…] stories. Some day, I’ll get to the Copper tales! Well, I gave The Bruce Partington Plans the Case Commentary treatment a few weeks ago for The Public Life of Sherlock […]