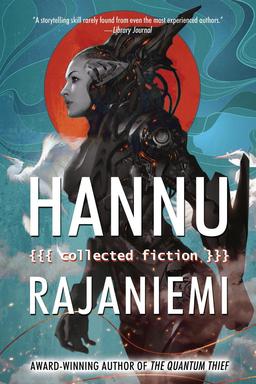 One of the more enjoyable parts of the Nebula Awards weekend was the autograph session late Saturday night — when folks like Greg Bear, Larry Niven, Connie Willis, Nancy Kress, Joe Haldeman, Jack McDevitt, Aliette de Bodard, Tobias Buckell, and dozens more sat down to sign autographs for fans. The author with the biggest line was unquestionably Cixin Liu, author of Nebula-nominated The Three-Body Problem, who’d flown all the way from China, but there was plenty of love to go around. Greg Ketter from Dreamhaven was doing a brisk business in the middle of the room, selling books to eager autograph hounds. I decided to limit myself to one book and, oddly enough, despite the rare opportunities to get autographs from some of my favorite authors, the title I couldn’t resist was Hannu Rajaniemi: Collected Fiction, from an author who wasn’t even in attendance. It’s a beautiful limited edition hardcover from Tacyhon Publications. I’d heard rumors it was almost sold out, and when I saw Greg had a single copy, I snatched it up.

Hannu Rajaniemi (The Quantum Thief) is always on the cutting edge. His postapocalyptic, postcyberpunk, and posthuman tales are full of extraordinary beings and unpredictable optimism. With his remarkable agility at merging science with storytelling, Rajaniemi makes the impossible possible — or even probable.

Rajaniemi’s much-anticipated first collection contains seventeen stories, with two original tales, a neurofiction experiment, and his Twitter micro-fiction. Journeying deep into inner and outer space, he asks us, how will human nature evolve when the only limit to desire is creativity? What happens when the distinction between humans and gods is as small as nanomachines — or as large as the universe? So whether you think the next big leap in technology might be genetic engineering, unlimited energy, or space travel, know this: Hannu Rajaniemi the arbiter of what happens after.

Hannu Rajaniemi: Collected Fiction was published by Tachyon Publications on May 19, 2015. It is $25.95 for the limited edition hardcover; there is no digital edition. The cover art is by Lius Lasahido.