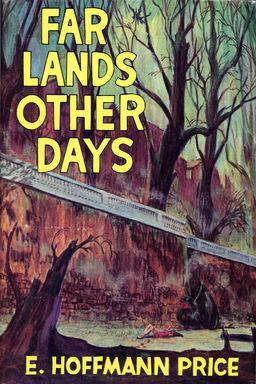 David Drake, author of The Tank Lords, The Sea Without a Shore, and dozens of other fantasy and SF novels, was also the man behind Carcosa, a small press he co-founded with Karl Edward Wagner in 1973. Carcosa published only four volumes — including Far Lands Other Days, a 590-page illustrated collection of the classic pulp fantasy of E. Hoffmann Price — but ah, what volumes they were!

Andy Duncan has started a new blog, Past and Present Futures, and he invited David to share his memories of Price. Yesterday he shared the results. Here’s a slice.

In fact [Price] spent only 30 days in the Philippines before the 15th Cav was recalled to the Mexican Border where Pancho Villa was raiding. Shortly after that they were shipped to France where they acted as mule skinners unloading freighters in Bayonne, France. He had stories about the prostitutes in all three continents.

When WW I was over, Ed was on garrison duty on the German border. The army created a service-wide scheme by which enlisted men could take an entrance exam for admission to West Point. Ed was one of the extremely few who gained admission through that test. He graduated in 1922 and was briefly a 2nd Lieutenant assigned to a Coast Artillery unit in NJ. He resigned ahead of a court martial because he had gotten to know the battalion commander’s wife rather better than the major was pleased to learn.

I’ve told the story this way to make it clear that though Ed was very smart, he was also an iconoclast who was not even slightly interested in polite society or its norms. He was acting out in the introduction [to Far Lands Other Days], but I don’t doubt he meant what he said.

I have a copy of “Far Lands, Other Days.” Bought it when it came out, way back in ’74 pr ’75/ To tell the truth, I liked EHP’s intro better than his stories, of which I managed to read only a few. Still glad I have it, but the Carcosa book I love is “Worse Things Waiting” by Manly Wade Wellman — fine stories and that wonderful art by Coye.

> The Carcosa book I love is “Worse Things Waiting” by Manly Wade Wellman — fine stories and that wonderful art by Coye.

You have no idea how long it took me to track down a copy of WORSE THINGS WAITING. Seriously, I hunted for that book for years. I was so excited when I finally found a copy that I didn’t even haggle. 🙂

Have you ever read Wellman’s other Carcosa volume, LONELY VIGILS?

Wish I had. I lost interest in fantasy/sf/comics soon after I bought “Worse Things.” The usual reason: growing up a little and entering high school. But a few years on I was reading aloud to my girlfriend from “Worse Things” and she loved the stories, so all came out well.

In the late ’70s and early ’80s Price also wrote four (I think) space opera novels, published by Ballantine. More importantly, in the early ’60s Arkham House published a small short story collection titled STRANGE GATEWAYS. Its contents are better, by and large, than those of the much larger FAR LANDS, OTHER DAYS. Price is also the only fictioneer to have met all three of the WEIRD TALES giants, Smith, Howard, and Lovecraft in person.