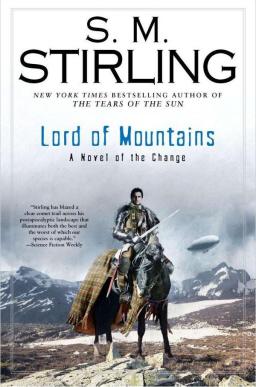 This blog has discussed S. M. Stirling’s Emberverse in some detail for the past several months. Beware spoilers as we move on to Lord of Mountains, Stirling’s 2012 addition to the series.

The logical second third of the post-quest novel Tears of the Sun, Lord of Mountains is the Act II confrontation that follows logically from the Act I setup, and coming before The Given Sacrifice‘s Act III, resolution. That these three chapters, published separately as novels, did not appear together under the same cover is a pity.

As previously discussed, the amount of “recap” material included with each is now crippling any loyal reader’s enjoyment of the texts. In fact, even new readers now feel the grit in the gears, as every time a character new to the individual text — for example, the first time Ingolf the Wanderer appears in Tears, Lord, and Given paragraphs of material is provided to foreground the character. Unfortunately, that background is now long behind Ingolf, and the current action of the narrative. And besides, how many readers are genuinely picking up the Nth book in this series, cold? And need to be reminded? Like, that one guy in Missouri, right? Yeah, you in the hat.

Would that this need be done only one time in one larger novel of three parts. First, the overall text would shrink considerably. Second, the sense of immersion would increase (and loyal readers of this blog remember what value we genre readers place on immersion, right?). Third, the narrative would flow more naturally.

As a Bush-era Secretary of Defense once opined, one goes to war with the army one has, not the army one wished one had. This sentiment is echoed by a character in Lord of Mountains, and it applies to the novels, or extended chapters, that continue to arrive annually. Perhaps in some future republication they can be packaged together, but even then would it pay for Stirling to take the time to thin the herd of redundant descriptions? Surely not.

Here perhaps we see an essential difference between film and prose. Technically adept fans of Peter Jackson’s bloated Hobbit film trilogy have already produced a cut slimmed down by roughly half. Fans of Star Wars have done the same with episodes 1-3. The fan edit of Terminator 3: The Coming Storm cuts frivolities such as self-inflating breasts, purges the plot of meaningless detours from canonical Terminator history, and generally “cleaned house” of minor technical issues, such as removing obvious “crane float” as the TX jumps onto a moving vehicle. 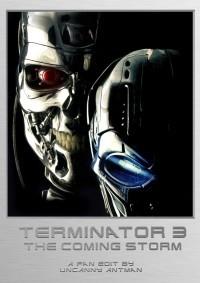 Any fan-edit endangers the artistic coherence (for good or ill) or the original. Most fans of the Terminator films found The Coming Storm pretty awful. If fixing dates and improving shoddy film editing were all a fan edit did, the original artist might find the result acceptable. Film, after all, is a collaborative effort from start to finish; a film’s Director is important and central but a Director also accepts that what appears in a film represents the work of many. In the case of Terminator 3‘s fan edit, however, the list of edits includes things the fan editor simply didn’t like, such as a line about Pandora’s Box, a particular song, or Arnold Schwarzenegger’s “old man face” upon taking a punch. (See these details and more here. If you’re a Terminator junkie, the fan edit is a darn good movie — but it isn’ the same movie as released in theaters, either.)

It is nearly impossible to imagine either Stirling or his publisher agreeing to an edit of the novels into one more coherent text. First, Stirling is the sole artist; there is no collaborative spirit. If he borrows something, such as song lyrics, he credits them appropriately, but the books are his alone. Second (this blog seems to like ordinal lists!) he and his publisher would be loath to introduce the question of copyright into any such endeavor.

Sadly, it has taken some six hundred words to conclude that the three post-quest “novels” are but chapters of a single story arc, and that is how they will remain. Indeed, one reads the novels one has, not the novel one wished one had. And what novel is that again? Oh, yeah.

Lord of Mountains opens with the Big Battle under way; after some third to half of the novel that battle is finished, CUT forces are in full retreat after a thrashing from which they cannot recover, a substantial portion of Boise’s army has defected to King Artos’s side, and the outcome of the larger war seems fixed. The good guys will win.

A weakness in Lord of Mountains is Stirling’s apparent reluctance to George R. R. Martin his characters — that is, kill them off. The only major casualty of the Big Battle is Artos’s horse Epona, a singluar creature present in the Emberverse since he was about ten years old. Despite putting many secondary characters into harm’s way, none suffer the ultimate fate of those who follow heroes.

This reluctance contrasts strongly with the opening trilogy of the Emberverse, which sees the deaths not only of Norman “evil tyrant” Arminger but also of Mike “established the Bearkillers and fathered Rudi/Artos” Havel. That break led naturally to a pause of ten years in the Emberverse chronology, before the series picked up with Ingolf the Wanderer wandering in to town with a vision to share and assassins on his trail.

Books’ worth of foreshadowing that Artos won’t live to trim his own grey hair, that he will die with a blade in his hand, become softened by visions of him as father to several children, themselves grown some years. No reader imagines danger to Artos during the Big Battle, but no tragedies occur to anyone else of note to the narrative, either.

Martin Thurston meets his end spitted on the Sword of the Lady; he serves Lord of Mountains as a stand-in for prophet Sethaz of the CUT. When Artos locks eyes with Sethaz during the battle, Sethaz turns tail and hoofs it to the rear. Exit stage east, pursued by a Raven. Readers wait until Act III to see the final resolution.

No other important action takes place. Stirling kills several chapters with politics — High King Artos must keep his coalition together after their stunning victory, for example, and aiming toward a healthy post-change Montana, sans CUT, once the war reaches its inevitable end.

Several more chapters fall prey to a side-trip to a lake where, in true Excalibur fashion, the Sword of the Lady is joined with the land itself by being thrust into (and later withdrawn from) the stone of the earth. Both Artos and Mathilda experience visions that span their ancestors (readers get to see Mathilda’s mother, Sandra, meet Norman Arminger for the first time, for example).

The author skilled enough to transition quickly and neatly from the opening trilogy of the Emberverse to Rudi’s quest, and to get that quest moving in one-third of The Sunrise Lands, could certainly accomplish more in these pages. But once again, one reads the books one has, not the book one wishes to have…. 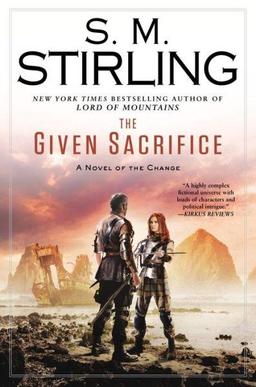 The book we have, Lord of Mountains, is certainly a more satisfying read than Tears of the Sun. Better it were part of a larger work between the same covers, but this is the book readers have.

Next time, we address Act III, the resolution of what comes to be known as the Prophet’s War in the Kingdom of Montival, in the ominously dubbed The Given Sacrifice.