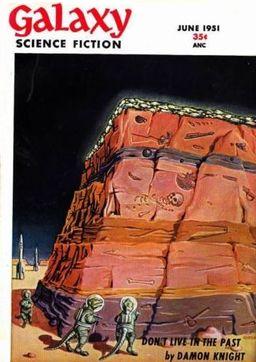 Here’s a review of a magazine issue that Matthew Wuertz has already covered here in his excellent ongoing traversal of Galaxy from its beginning … but I happened to read it and John O’Neill assures me that another (not necessarily dissenting) view is always welcome.

This is from the first year of Galaxy‘s existence. To me it reflects an magazine increasingly confident of its place. The cover doesn’t illustrate any story: it’s by Ed Emshwiller, titled “Relics of an Extinct Race”, and it depicts lizard-like aliens investigating rock strata containing remnants of human civilization.

The back cover advertises a book called The Education of a French Model, which was the memoirs of “Kiki de Montparnasse” (real name Alice Prin), who was somewhat famous as a nude model, and mistress of, among others, Man Ray, in the early part of the 20th Century. Her memoirs featured an introduction by Ernest Hemingway, which the ad happily trumpets. Other ads were for Saran Plastic Seat Covers, and for weight reducing chewing gum (called Kelpidine!), and other than that for books.

Interior illustrations were by Elizabeth MacIntyre, David Stone, David Maus, and “Willer” — this last a somewhat transparent (and, I would have thought, unnecessary) pseudonym for Ed Emshwiller (who usually signed his word Emsh). I note that except for Emshwiller the names are all unfamiliar, suggesting that H. L. Gold may have been looking for “new blood.” (For that matter, Emshwiller was “new blood” himself, a Gold discovery who had only begun illustrating for the SF magazines that year. It’s just that he’s the one of these illustrators who became a legend.)

Elizabeth MacIntyre is interesting as one of very few women SF illustrators in that era (the only other one I can think of offhand is the great Weird Tales artist Margaret Brundage). Todd Mason suggests, I think sensibly, that both the different set of illustrators and the unexpected advertisements can be attributed to Galaxy‘s publisher, World Editions, which had wider ambitions than just publishing SF. 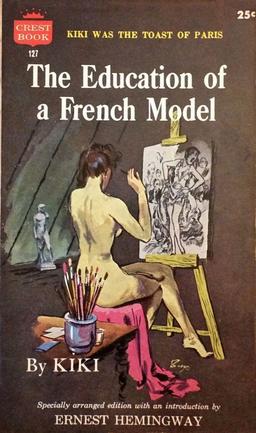 This issue features two longish novelettes and a long serial portion, leaving room only for one short story, a brief editorial, and the book review column, also quite short, Galaxy 5 Star Shelf, written here by Groff Conklin.  Gold’s editorial, “Looking Forward,” uses a complimentary letter from Harold Cheney as a springboard to some reminiscence of Gold’s own childhood discovery of the field, followed by discussion of the current and upcoming issues, and (a common feature of Gold’s editorials) the problems the magazine was facing, such as postage costs.

Conklin reviews The Illustrated Man (very enthusiastically), The Skylark of Space (less enthusiastically), and a book I’d never heard of, Solution T-25 by Theodora Dubois. Conklin notes that Dubois has written mystery stories, and adds “one could wish that she had stayed with her first love …”. Ouch!

That’s a pretty impressive TOC just based on the names — all well-remembered SF writers, indeed four of them near-legends, and the fifth, Kris Neville, an underrated interesting writer of the time. That said, only one of these stories has really lasted — but one lasting story and three at least competent pieces is still a pretty good score.

“Hunt the Hunter” is set on a distant planet where the leader of the human race (I assume) is hunting the mysterious “farn beast.” He has roped in as guides two businessmen who have apparently previous visited the planet and bagged a farn beast. Meanwhile, an alien force is supposed nosing around the planet. 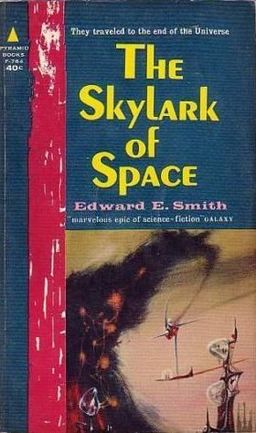 The main viewpoint characters are the two businessmen, who make their resentment of the leader clear — and who feel even worse when the leader decides to use one of them as bait. The bulk is the story is fairly familiar cynical comedy about bad and worse people variously bumbling around and mistreating each other… and then the ending, quite literally, springs a little trap. Nice story, not a classic but solid work.

Kris Neville, as I said, was an interesting and somewhat underrated writer — sometime collaborator with Barry Malzberg, began publishing in 1949 and was active until his untimely death in 1980. He was born, by the way, in Carthage, MO, home of Belle Starr and the great baseball pitcher Carl Hubbell and the far from great (indeed criminal) Missouri Attorney General William Webster, but NOT related to “North Carthage,” the fictional town where Gillian Flynn’s recent bestseller Gone Girl is set. (Carthage is near Joplin, entirely across the state from the Mississippi, on which North Carthage is said to sit.)

“Angel’s Egg” is the one story in this issue that is still widely remembered. It was Edgar Pangborn’s first published story, and indeed H. L. Gold in this issue’s editorial states “No day’s mail is free of these flakes of literary dandruff [horribly cliched submissions] but then, unexpectedly, an “Angel’s Egg” comes in and you suddenly find yourself living a story… It had the feel of a find, which is a wonderful experience.”

It’s the story of David Bannerman, a middle-aged science teacher, a bachelor (one might suspect, a “confirmed bachelor” in the coy sense that Edgar Pangborn was) living alone in rural New England. After a mysterious “flying saucer” sighting he comes across a strange “egg” that his hen is sitting on. The egg, of course, hatches an alien: a humanoid female creature with wings, that he of course calls an angel.

The story is static and talky, and in essence over time Bannerman learns (and we learn, reading his journal) that the “angel” is indeed an alien, one of a group sent to Earth to examine humanity and determine if we are ready to absorb the lessons of, essentially, utopian life that her people have learned over millions of years. The story turns on a sacrifice that Bannerman must decide to make, or not make, to help the “angel” and her people learn more about humans. 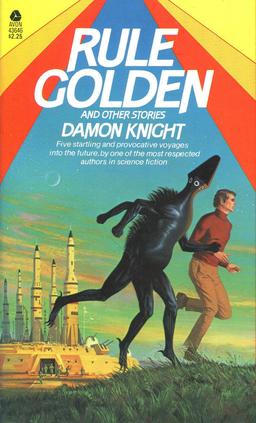 And that’s pretty much all there is… there is an odd, underdeveloped, frame that seems to suggest that in the decades following some steps towards a world government were taken… it’s not quite clear whether the aliens have subtly helped humanity in this direction, or whether humanity will screw it all up. I think I’d have liked it better if that was more developed.

Damon Knight is one of those SF writers who I’ve always thought was best at the novella length (loosely defined). (His late novels are pretty good.) Stories like “The Earth Quarter,” “Rule Golden,” “Double Meaning,” “Four in One,” “Natural State,” “Dio,” and “Mary,” all long novelettes or novellas, really stand out in his oeuvre.

That said, Knight also wrote a passel of equally brilliant short stories: “The Country of the Kind,” “Masks,” “I See You,” and “Fortyday” are four that come immediately to mind, from four different decades. Perhaps then it is fairer to say that Knight was a great writer of short fiction, though I’d say he didn’t come into his own as a novelist until late in his career. (On balance, despite Knight’s lasting fame in the field, I think he was underrated as a writer of fiction, perhaps because of the prominence of his contributions as editor, critic, and founder of SFWA.)

Anyway I was a bit surprised to find a longish novelette I didn’t recognize in “Don’t Live in the Past.” Bernard Vargas is a functionary in the far future who is forced to travel back in the past after the “pipelines” in his world have malfunctioned, sending a bunch of dangerous stuff (mostly food) to the past. Vargas ends up in the very period in which the Sacred Ancestor who founded their society lived. He ends up imprisoned, and escapes with some revolutionaries. It seems that “Blodgett,” the Sacred Ancestor, is a thug. But how can that be? The future is a utopia?

Knight’s story, of course, suggests in part that perhaps that future is not such a utopia after all. But also… well, there’s a twist to the story, a fairly guessable one. It’s an OK story, but it’s easy to see why this isn’t one of Knight’s best remembered pieces.

Finally, Mars Child is the first of two novels that Cyril Kornbluth and Judith Merril wrote together. The other is Gunner Cade, serialized in Astounding in 1952. Mars Child was published in book form as Outpost Mars in 1952, and later as Sin in Space in 1961. 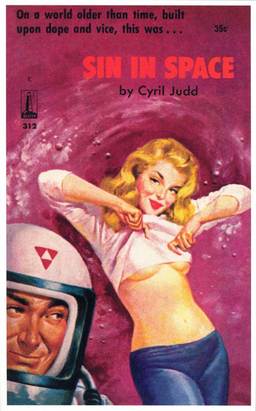 That last reprint was by Galaxy/Beacon, which published a number of mildly racy SF books (such as Poul Anderson’s Virgin Planet, and Laurence Janifer and Randall Garrett’s Pagan Passions) — I assume that possibly Mars Child/Outpost Mars was revised to add some additional titillation for this later publication. The two novels, along with Merril’s first solo novel, Shadow on the Hearth, were reprinted in an omnibus by NESFA Press, Spaced Out!, in 2008.

Merril published only one other novel, The Tomorrow People (1961), and in all honesty I would have to say that the fact that her excellent reputation in the field rests mostly on her editing and criticism is quite fair — she wrote a few decent stories, but no great ones, and her novels are minor indeed.

I’ve never read Outpost Mars (or Mars Child) before, but I went ahead and read this second part of the serial. It’s fairly standard Mars colony stuff — there is a struggling series of colony cities on Mars, still highly dependent on Earth. Most cities are supported by industrial concerns and are in essence company cities. One city, Sun Lake, is a cooperative, focused on scientific research, especially on trying to adapt to Mars — to make it possible to live on Mars without depending on supplies from Earth.

This segment concerns an obviously trumped-up charge of stealing the addictive drug marcaine that might destroy Sun Lake, as well as the visit of a crusading journalist to Mars, and also the birth of a child on Mars who might actually survive. (Previous children have all failed to thrive.)

It’s really typical stuff, with politics perhaps a bit to the left of the usual … I’m tempted to read the whole thing (actually I’m more tempted to read Sin in Space) … but I doubt it’ll be anything special.

Rich Horton’s last retro-review for us was the May 1954 issue of Amazing Stories. See all of Rich’s retro-reviews here.

Sin in Space is bound to be a let down. Don’t be tempted. Nothing in the text could live up to cover. You will be disappointed when you find that the chap on the front takes his kit off. Far better to imagine having sex with your space suit still on!

We can never have enough people posting/talking about Galaxy! It’s good for us to overlap on the coverage at times, Rich.

The first Damon Knight story that pops into my head is “To Serve Man”. But I may be partial to that because of the episode of “The Twilight Zone”.

I get that the cover for “Sin in Space” is meant to sell copies, but there’s nothing that racy in the novel itself. I’m sure Gold was rolling his eyes when he saw it since he was always striving for covers that weren’t sexually provocative.

But then I think – what gives with that back cover ad? Seems inconsistent with what he said he wanted – a magazine that doesn’t have potentially embarrassing covers. Clearly, if you’re reading a magazine, someone can see the front and back covers of what you’re reading.

[…] Horton’s last retro-review for us was the June 1951 issue of Galaxy Science Fiction. See all of Rich’s […]