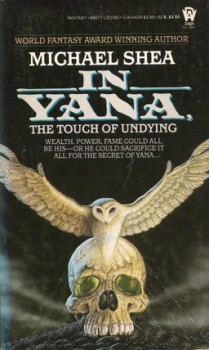 As I was rushing to get out of the house the other morning I remembered that I had to pick a book to read and review for this week. Nothing in the front row of my swords & sorcery shelves caught my eye so I started going through the books stacked in the back and still, nothing called out to me (that was short enough to read in just a couple of days). Finally I snagged the late Michael Shea’s In Yana, the Touch of Undying (1985). I saw the print was big, so even though it’s just over three hundred pages I knew it would be a quick read. I can’t believe that such lame criteria led me to this dynamite book.

Last year John O’Neill wrote that a friend had told him this book would change his life, though I didn’t remember that when I took up In Yana last Thursday. What I knew, from the back cover, was that the book featured a student named Bramt Hex searching for the secret of immortality in a world filled with ogres, ghosts, vampires, and lots of magic. From reading Shea’s very good Nifft the Lean, I expected a similar work of Vancian fantasy — dark, bizarre imagery laced with humor.

For the first chapter or two, In Yana appears to be just that. At 28, Bramt Hex has been a student for much of his life. He’s fat, worried about failing his final examination, and coming to dread what he assumes will be a life of day-in day-out dreariness in academia. When a wealthy dowager, the Widow Poon, enters the inn where he’s dining, Bramt allows a wave of romantic dreaming to sweep over him.

The lady, whose aquiline profile Hex had been admiring, turned and settled her cool gaze in his direction.

Her gaze was clearly devoted to the window he sat by, yet he felt a second thrill. He asked himself why he should be so impressed with this woman. Though maturity had never been a bar to his lust, he preferred women of his own age. As for her wealth and station, he had always mocked fatuous reverence for the “great.”

What affected him so strongly, he realized, was a sense of portent. A moment before he had wondered how he might change his life. Now this Embodiment, this mute spinx of Wealth and Power, sat not five strides distant and practically solicited his eye!

With the suspended feeling of a man who makes a great first step, Hex rose in his place and made the lady a courtly gesture welcoming her to view out the window. Almost imperceptibly she acknowledged him.

By the next day, Bramt has sold his books, cashed in his dormitory voucher, and marched to the widow’s mansion. While surprised by the student’s sudden appearance on her doorstep, Madame Poon allows him to express his desire. He wants to throw himself at her feet and let her and fate lead him to a different, more adventurous life. Surprisingly enough, while she tells him there can never be anything physical between them, as all such physical intimacy revolts her, she appreciates his wit and learning. And there is an important task she needs someone to perform for her. 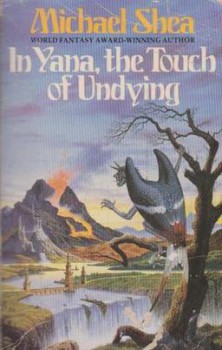 Madame Poon has been nominated for a hereditary municipal priestess position. She needs to be socially above reproach. Unfortunately her late, and quite despicable, husband owned the largest brothel in town and now it is in her name. Someone must buy it, show they’ve actually owned it for decades, and then immediately turn around and resell it.

Two important things occur while Bramt takes up Madame Poon’s tasks. The first is that he hears of Yana and the touch of undying: if one can travel to that unknown place immortality will be conveyed on him. The second is that the novel becomes something very much other than what it has been so far.

Vancian fiction, even though it’s filled with dark imagery and self-aggrandizing, untrustworthy protagonists, is generally only as heavy as a glass of champagne; it exists to entertain. Its stories are filled with rare, exotic words and scintillating descriptions of strange worlds. Neal Barrett’s Finn the Lizard Maker books are peopled with madcap characters spouting clever dialogue. For a splendid recent example you can read Matthew Hughes’ “Prisoner of Pandarius,” which I just reviewed here at Black Gate. In Yana is a much darker draught.

Without giving anything away, Bramt Hex, sheltered by a life in the academy and blinkered by a desire to forge a new one, is unable and unwilling to see the true and utterly evil intentions of Madame Poon, even as he helps them come to fruition. Almost at once his inspirational dreams are proven to be little more than sentimental hogwash.

Fleeing the wrath of Madame Poon, Bramt decides he will find Yana and acquire the touch of undying. Immortal, he will travel the world and create the first truly comprehensive atlas. He will create something important and lasting.

By the time Bramt’s quest reaches its end he will have become involved in a revolutionary movement, been exposed to blind and brutal justice, hid from an ogre, killed a giant man-spider, and been rescued by — then betray — a titan. He will even have traveled to the edge between life and death on a sorcerous sailing ship:

Oddly though, it was alive — most horribly. Their keel, scarcely moved by the slack, tarry sails, cut through a soup of soft concussions and twisting shoves. From the rail all eyed the main, wherein a host of presences stirred. No one of these had shape in more than blinks, and they teased the mind with a fleet, melting multitude of fanged and snouted things. The siltbars too were alive with mournful, anchored movement, char-limbed things that had been men writhed there, rooted at waist or knees, and strange shapes squirreled amid their blackened arms. The stark-ribbed giant too — legless, and with just one wolfish lower jaw thrust up, a fanged tower where its head had been — was doubly alive. Numberless ghosts maggoted its hide, or wheeled restlessly in winged flocks from perch to perch on it. 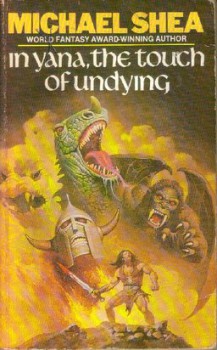 Hex does horrible things, supposedly in the name of justice. Nearly every step he takes toward his goal puts a new burden on his spirit or wears away another layer of illusion. In the end, all his ghosts will come back, quite literally, to haunt him.

That’s as much detail as I want to give about Michael Shea’s terrific book. There is the same sort of incredible inventiveness and out-of-the-blue craziness as in any of the books I’ve mentioned here by other writers. But Shea is playing a different game than they were. For every illusion of Bramt’s that gets torn away, I think he wanted to do a little bit of the same for the reader.

And yet, In Yana, the Touch of Undying, is a surprisingly life-affirming book. I don’t want to make it sound like this is some sugary Up With People sort of a story. I mean it does feature giant man-eating sea slugs and two kinds of vampires rending and ripping human flesh. But this isn’t just good, frothy fun. By the end of Jack Vance’s The Eyes of the Overworld, “hero” Cugel the Clever learns exactly nothing. Bramt learns how to live.

Will In Yana, the Touch of Undying change your life? Who can tell? What it will do is convince you that Michael Shea was one of the best and most original fantasy writers. If you haven’t already sampled him this is a very good place to start. It’s not in print but copies are available for as low as $.98 on Amazon.

Definitely one of my favorites. Bramt Hex is the anti-Nifft.

Joe – that’s a great observation. I’m so glad I finally read it. Now, I’ve got to read the second two Nifft books.

One of my favorite books. Shea was a true master. RIP.

Especially that sequence in the underground ruins near the end with the strange cults and godlings. Reminded me of MAR Barker’s Tekumel.

The one thing by Shea that I did not like was The Color Out Of Time. His mythos short stories are quite good, but that novella was a real clunker. Something to avoid for your blog.