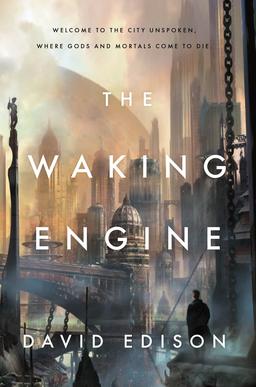 At we wrap up each year, I usually look back at all the new books we’ve highlighted over the past twelve months and make one final effort to slip in a few titles we’ve overlooked. If a hardcover has been on the shelves too long to showcase as a New Treasure without embarrassing myself, I sometimes feature the paperback reprint instead. Usually I get away with it without too many complaints — Black Gate readers are an indulgent lot, especially when it comes to books.

I’m in  bit of a jam with The Waking Engine, though. David Edison’s debut novel has received lots of terrific press… I’m not sure how I managed to miss it when it first came out, but I can’t let the year close out without at least a mention.  The paperback’s not due until May 5th, however, so it looks like I need to fess up that I’m trying to pass off a February 2014 title as a new release, and hope everyone is too distracted by New Year’s festivities to notice. Thank you for your indulgence, and Happy New Year.

Contrary to popular wisdom, death is not the end, nor is it a passage to some transcendent afterlife. Those who die merely awake as themselves on one of a million worlds, where they are fated to live until they die again, and wake up somewhere new. All are born only once, but die many times… until they come at last to the City Unspoken, where the gateway to True Death can be found.

Wayfarers and pilgrims are drawn to the City, which is home to murderous aristocrats, disguised gods and goddesses, a sadistic faerie princess, immortal prostitutes and queens, a captive angel, gangs of feral Death Boys and Charnel Girls… and one very confused New Yorker.

Late of Manhattan, Cooper finds himself in a City that is not what it once was. The gateway to True Death is failing, so that the City is becoming overrun by the Dying, who clot its byzantine streets and alleys… and a spreading madness threatens to engulf the entire metaverse.

“and hope everyone is too distracted by New Year’s festivities to notice.”

Ice in, so no festivities here. Nothing to do but peruse the internet and pay attention. You’re busted. 🙂

If we haven’t heard of it before, it’s new to us (with apologies to whichever network’s promos for repeats I’m paraphrasing).

I’m in Midland (been here about 3 months). My first TX ice storm. A bit frustrating how pretty much everything is shut down — particularly B&N 🙁 But I just spent a year in North Dakota, so no complaints 😉
Where in TX RU?

I’m in Lubbock, so just up the road from you. I’ve lived in Texas most of my life but in this part of the state for only 5 years. One thing you’ll discover is that no two winters are alike here. Some years, like last year, it can be pretty harsh while others are so mild we get no winter precip of any form. Everything shutting down can be frustrating, but keep in mind most people don’t know how to drive on ice. I went to the store today, and some kid deliberately tailgated me most of the way.

> Nothing to do but peruse the internet and pay attention. You’re busted.

Curse the climate in west Texas! I should know not to try and sneak anything past readers in bad weather. 🙂

That is a gorgeous premise. I do like a story of the pesky yet persistent dead.