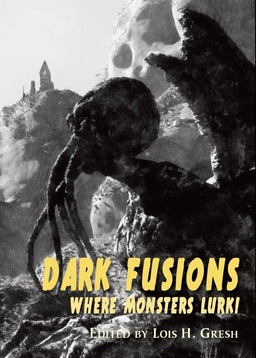 A month ago, I was wandering the Dealer’s Rooms at the World Fantasy Convention like a kid in a candy store, finding treasure after treasure. I’ve already written about the great finds I made at the Valancourt and Hippocampus Press tables, and Daryl Gregory’s We Are All Completely Fine.

But if I’d had to leave the convention with only one book, I think it would have been a pretty simple choice. Lois H. Gresh, author of Blood and Ice and The Twilight Companion, and PS Publishing have teamed up to produce a glorious anthology of “weird tales, dark science fiction, dark fantasy, and pure horror” tales, Dark Fusions, subtitled Where Monsters Lurk!

It was released in a limited edition hardcover last year, but I didn’t set eyes on it until this year. Packed with original short stories by Cody Goodfellow, Darrell Schweitzer, Nancy Kilpatrick, James Alan Gardner, Yvonne Navarro, Mark McLaughlin, Robert M. Price, and many others, I knew I wanted this one the moment I set eyes on it.

Sometimes, darkness is internal, generated by our minds or bodies. Sometimes, it’s due to external devices, such as monsters, shadows, or lurking dangers. A dark fantasy story requires an otherworld, an imaginary realm, a supernatural story requires a creature or event that exists beyond our natural universe, and a dark science fiction story revolves around science gone bad.

Weird fiction lies on the boundaries of horror, fantasy, and science fiction. It creates a mood. At its best, it features dark, bizarre, and unexplained phenomena. Here, the monsters aren’t vampires, werewolves, or splatterpunk killers. Instead, something has violated the natural laws of reality, and the strange events of the story could happen. Darkness driven by the weird is particularly potent.

Within these pages are tales of horror, twisted science and fantasy, and the weird: something for every dark appetite. Included in Dark Fusions: Where Monsters Lurk! are intensely weird stories, as well as traditional weird tales, dark science fiction, dark fantasy, and pure horror. Some of these stories will blow your mind. Others will just scare the hell out of you.

[…] as well as Daryl Gregory’s We Are All Completely Fine and Lois H. Gresh’s anthology Dark Fusions – Where Monsters Lurk! But I haven’t even mentioned the Chizine table yet, and that’s a serious oversight. A […]