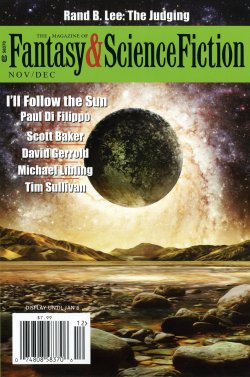 Editor Gordon van Gelder kicks off the Nov/Dec issue with the following, disguised as part of the intro to Paul Di Filippo’s “I’ll Follow the Sun”:

There was a time — or so it seems to your editor — when writers turned to science fiction to explore ideas they couldn’t touch in any other medium. A fair number of stories regarded as classics today were transgressive when they first came out.

These days, however, the internet seems to thrive on posts by people who aren’t keen on tolerating viewpoints that differ from their own, and some of those posts focus on the science fiction and fantasy field. They’ve inspired us here at F&SF to give this issue an extra helping of stories that deal with touchy themes or go beyond the bounds of Political Correctness.

Quite an intro. There’s an impressive list of contributors taking part in this rebellious experiment, including Albert E. Cowdrey, Scott Baker, and David Gerrold.

Even film reviewer Alan Dean Foster gets in on the act with a little honest blasphemy in his column, “On Novelizing Noah,” a meditation on adapting last summer’s biblical-themed movie, written as a conversation with God.

David Gerrold’s “The Old Science Fiction Writer” is a first-person account given to a grandchild (gender not yet decided), set in a science-fiction future in which achieved technology has rendered made-up technology obsolete – and apparently science fiction with it. From the first paragraphs it’s clear Grandpa isn’t prone to delivering G-rated material blessed by committees for consumption by formative minds: he’s offering full-color stories we’d like to hear ourselves. But … the child demands the truth. Alas. It’s an interesting future in which puberty involves an application for a license, and requires a test. (Grandpa has seen Return of the Jedi and has advice: “It’s a trap!”)… “The Old Science Fiction Writer” proves there’s always another story to tell, and something to learn. And it shows a strong argument in favor of science fiction as a platform for social discussion.

Departments this issue include book reviews by Charles de Lint and Michelle West, film columns from Alan Dean Foster and Kathi Maio, cartoons by Mark Heath and Arthur Masear, and a Curiosities entry by Graham Andrews. The cover is by Mondolithic Studios.

We last covered F&SF here with the September/October issue.