The last few weeks have been particularly busy for me in my real life (as opposed to the one I lead as a dashing blogger-about-town on all things old school Swords & Sorcery) so this won’t be as complete a roundup as I’d like it to be. Fantasy Scroll #3 will have to wait until next month. As for Beneath Ceaseless Skies, I failed to read either issue last month, but looking at October’s authors, I see World Fantasy Award-winning (for the splendid “The Telling“) Gregory Norman Bossert, along with some other talented writers, so let’s just assume you should go check them out for yourself.

What I did manage to read were magazines I never miss — Swords and Sorcery Magazine (#33) and Heroic Fantasy Quarterly (#22). I’ve been following the former since the third issue, so I never want to miss out on what happens next. As for HFQ, it’s consistently the best — and my favorite — magazine for heroic fantasy, which means as soon as it hits the electronic superhighway, I try to check it out.

Swords and Sorcery Magazine #33 presents us with its usual quota of two new stories. In ages past, Jonathan Nathaniel De Este, commander of Queen Isabella’s Dark Army and protagonist of Alex B.’s “Black Water“, “drank the Black Water and took the Darkness upon his spirit.” Every other man who did that found himself transformed into a bestial man or a complete beast. Only Jonathan has managed to hold onto a portion of his humanity and prevent himself from being changed externally as well as internally.

It’s an interesting story filled with grisly bits. There’s real potential for some exploration of Jonathan’s past and motives, but it’s not supplied. The mystery over his relationship to a picture of a princess is left only vaguely answered at best.

The often amusing fractured chivalric tale, “The Daisy Knight” by Gary Every, warns the reader what happens when you don’t trust the word of the old witch you meet on the road. En route to a tournament where he hopes to win the hand of Princess Mary, the knight Kurestan and his squire encounter a “haggard old woman” selling the daisies that grow wild in the surrounding field. When he asks why he should buy her flowers, she tells him that wearing a single daisy signifies its wearer’s undying love for his beloved, but:

“When a knight wears a double daisy, it means the lady has pledged her heart and her virtue to the knight in return..”

Kurestan readily buys a pair of flowers, constantly treating the witch with courtesy and respect. He balks, though, when she offers to sell him the first daisy of Spring for the extravagant price of two hundred silver marks. Despite her warning that he should buy it, he declines and rides off to the joust. I won’t give away what happens at the tourney, but it’s very funny and more than a little bit sad. 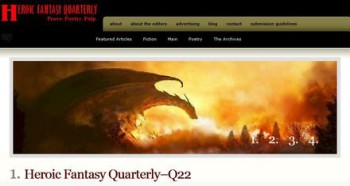 Whenever I make the mistake of looking at the giant-mega-doorstopper fantasy books for sale in Barnes and Noble, or realize the dearth of heroic fantasy on Amazon’s list of bestselling fantasy books, HFQ is there to set things right in my worried mind. This quarter’s issue is no exception. The mere fact that the cover picture, “Burn” by Jereme Peabody, is of a dragon attack is enough to settle my disquiet.

Issue 22 opens with a bang. A well-done bit of exciting fun, Eric Atkisson’s “Crazy Snake and the Camazotz” is a pretty traditionally-structured S&S story — warrior arrives, encounters evil, fights monsters — but the story setting and titular hero are pretty uncommon for the genre. In 1856, Crazy Snake, a half-blood Nermernuh warrior, has wandered south from the southern Great Plains into the Yucatan in search of his mother’s people. She had been captured by a Kiowa warrior in Mexico when she was only a girl and traded to Crazy Snake’s father. She possessed the ability to hear the spirits talk and passed it on to her son.

While trekking through the Yucatan forests, he is confronted by a great edifice he has a word for only in his mother’s Spanish: pyrámide. He spies a trio of bizarrely-dressed men dragging a woman up to the pyramid’s summit for what is clearly no good purpose.

Crazy Snake overcomes an initial desire to leave and instead sneaks up, rescues the girl, and returns her to her village. From the medicine man there, he discovers that a group of men have come to the region to awaken an old bloodthirsty god, Camazotz. As they have grown in power, they have killed many men from the village. A visit from his mother in a dream convinces Crazy Snake to do what he can to help the villagers. Cinematic bloodshed, monster fighting, and chaos follows.

This would have fit perfectly into one of the old S&S anthologies from Lin Carter or Andrew Offutt. I don’t know if Atkisson’s written any other Crazy Snake stories, but the first description of our hero implies a lot happened before he reached the Yucatan: 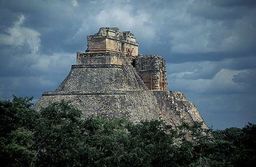 Though he was far south of those plains now, he could have been mistaken at a distance for a wayward Mexican soldier, for upon his head was the visored cap of a cazador and in his hands a Spanish musket. But there the similarity ended. Instead of polished boots and pressed pants he wore the buckskin moccasins and breeches of the Nermernuh and a leather quiver of arrows strapped across his shirtless back. His horse, too, a finely muscled brown and white-spotted pinto, carried the signs of distant lands and strange journeys — a brightly striped Zapotecan saddle blanket, a buffalo hide war shield fringed with feathers, and the dusty saddlebags of a Texas Ranger long since departed from the world.

The second story, “Shadows and Foxfire” by R. Michael Burns, is the fourth adventure of samurai Hokagé. I haven’t read the others, but I will be reading them in the future. Hokagé was training to be a priest, but the gods abandoned him. When his family was killed by bandits, he joined the army in hopes of seeing them avenged. On the bandits’ defeat, Hokagé was made a samurai. The story opens as he is returning from visiting his family’s graves. Caught in a ferocious storm, he finds shelter in a lonely inn tucked away in the woods. He is welcomed by the master of the house and his servant, a young woman named Moriko. Nothing, as is pretty much always the case with such fortuitously found refuges, is as it seems.

“Feathers” by Andrew Knighton is about a father picking up his weapon after many years in order to do whatever he can to protect his son from death. It’s far less simple than that makes it sound and I found it surprisingly touching for so brief a tale.

Charles Payseur’s “Handful of Spring” is about Mina and three other people from her village who must travel to “a strange, magical place, beyond the river” in order to grab a handful of spring. For three years, no one has managed to succeed and the village is nearly buried under snow.  Rarely do the more surreal stories work for me and this one, sad to say, isn’t an exception.

Issue 22’s first poem is the oddly titled “Ice Dragon’s Lullaby” by S.W. Smith. A dragon remembers the world’s youth and finds what he needs to rest in a woman’s voice.

A tale of insults and murder is told in the second poem, “The Lay of Hrethulf Glamirsbane” by Cullen Groves. As with his previous poem in HFQ, “The Sword“, the author does a very good job of conveying the old Norse and the violence and gloom that permeates many of their stories.

So thank you, Swords and Sorcery Magazine and Heroic Fantasy Quarterly, and all the people who helped me secure my S&S fix for the month. And to all you readers, keep on visiting these magazines and let them know what you think.

Thank YOU, Fletcher, for writing these! I for one greatly appreciate your reviews, reminders, rejoinders, and rejoicing 🙂