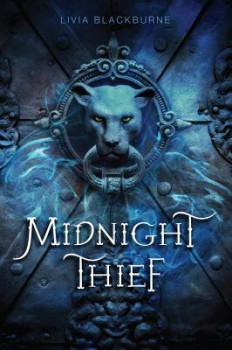 My friend Livia has recently released her first novel, Midnight Thief, with Disney’s Hyperion imprint. I first met Livia at MIT, where she was studying the brain science of reading. She blogs on the topic at her blog, A Brain Scientist’s Take on Writing.

I’ve always been impressed with how much effort she makes to understand the how and why of what makes stories work (see, for example, this post on the anatomy of a death scene), and to use that in her own writing, so it doesn’t surprise me that she’s gone on to sign with a major publisher.

Midnight Thief is a YA novel set in a secondary world of assassins, barbarians, and demon cats:

Growing up on Forge’s streets has taught Kyra how to stretch a coin. And when that’s not enough, her uncanny ability to scale walls and bypass guards helps her take what she needs.

But when the leader of the Assassins Guild offers Kyra a lucrative job, she hesitates. She knows how to get by on her own, and she’s not sure she wants to play by his rules. But he is persistent — and darkly attractive — and Kyra can’t quite resist his pull.