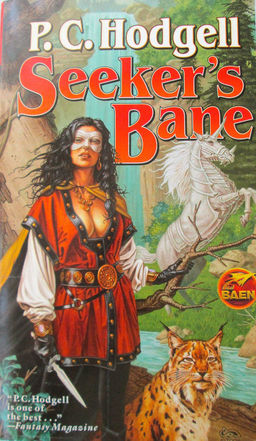 Sometimes it’s handy being editor of Black Gate. For one thing, it sure keeps you in-the-know on great books. I was editing Fletcher Vredenburgh’s enthusiastic review of P. C. Hodgell’s God Stalk last October, which begins thusly:

Out of the haunted north comes Jame the Kencyr to Rathilien’s greatest city, Tai-Tastigon. From the hills above, the city appears strangely dark and silent. She arrives at its gates with large gaps in her memory and cat claws instead of fingernails. She’s carrying a pack full of strange artifacts, including a ring still on its owner’s finger… and she’s been bitten by a zombie. Wary, but in desperate need of a place to heal, Jame enters the city. So begins God Stalk, the first book in P.C. Hodgell’s Kencyrath series and one of my absolute, bar none, don’t-bother-me-if-you-see-me-reading-it, favorite fantasy novels…

I’m so grateful Carl gave me this book thirty years ago. P.C. Hodgell seems so far below the general fantasy radar, I don’t know if I would have ever heard of her at all, which is pretty darn shameful.

Ha, I thought smugly, looking at my bookcase. Maybe she’s below the radar for most folks, but I’ve got my copy right here. Fletcher continued:

Following God Stalk came the 1985 sequel, Dark of the Moon… It’s taken nearly thirty years for the next four books to appear: Seeker’s Mask, To Ride a Rathorn, Bound in Blood, and Honor’s Paradox.

Wait, what? There are sequels? Like, five sequels? How did I not know? Are they out of print? Gahhh!

Fortunately, Baen Books to the rescue. Baen has collected the first four novels in two handsome mass market paperbacks: The God Stalker Chronicles (January 2010) and Seeker’s Bane (August 2010), both still in print. They’re a great way to get started on this terrific series, which Hodgell and Baen are continuing — I note the seventh volume, The Sea of Time, was just published last month. I just bought Seeker’s Bane and it’s a fabulous bargain: 1168 pages, priced at $7.99 in paperback and $6.99 for the digital version. The covers are by Clyde Caldwell. Check ’em out.

Those look like Caldwell boobs… he worked for Baen around that period, could you check the credits for me John?

Click on the cover to see the big version, and have a look at the artist signature at the bottom right. It’s dated 2008, which tells me there was probably a trade paperback edition first.

Yep, I have the trade paperback Seeker’s Bane sitting over on my shelf. (Shamefully unread.)

Yep, the little wave/fish sigil is Clyde Caldwell 🙂 Its truly hard to miss a Caldwell cleave.

I haven’t read this series yet (although I certainly wish to in the future) but I read somewhere that the character pictured on this (and other) Baen covers is described in the text as flat-chested. If this is the case then Caldwell either: a) didn’t read the text, b) didn’t care, or c) was asked by someone at Baen to ‘sex-up’ the character for the covers. Or maybe some combination of the above.

When one of these Baen covers was released, Hodgell memorably wrote on her blog, “The boobs are back.”

The early books describe Jame as slender enough, top to bottom, to be mistaken for a boy. I haven’t kept up with the series, so I don’t know if that changes later.

If the Caldwell cover sells enough copies to help Hodgell keep writing, then it’s a necessary evil I suppose I can live with (said the writer whose book cover features a woman naked but for a profusion of strategically placed flowers).

Well said Sarah. I never fault a writer for an ADs decision to try to boost sales. Lord knows, it’s already hard enough to make a living at this, so a few extra units pushed [assuming that cover had a positive effect] is never a bad thing.

Golgonooza: ‘The boobs are back’ is fantastic, and I’m impressed you remember that quote.