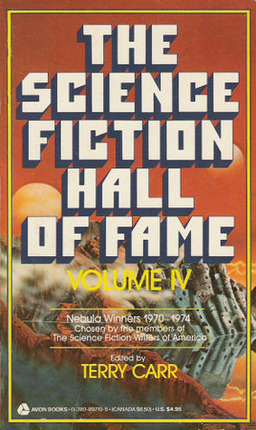 Over at Kirkus Reviews, Andrew Liptak continues his thorough and excellent survey of vintage science fiction with a look at one of the most important anthology series in the history of the genre: the four-volume Science Fiction Hall of Fame. Here he is on the first volume:

The book appeared as a hardcover in 1970 under the title The Science Fiction Hall of Fame, Volume One: The Greatest Science Fiction Stories of All Times, chosen by the members of the science fiction writers of America. Silverberg, in the introduction, described the anthology as “nearly definitive an anthology of modern science fiction stories as it likely to be compiled for quite some time.” The book sold well, and sold out within a year. Doubleday sold the rights to Avon Books, which published a paperback edition in July 1971; it would go through dozens of printings in the coming decades. In 1971, it placed first in Locus’ annual poll for best Anthology/Collection…

The Science Fiction Hall of Fame, Volumes 1 & 2, are perhaps the finest SF anthologies of the 20th Century and even today they serve as a superb introduction to the genre for modern readers. (The only comparable books I can think of are The Hugo Winners, Volumes I and II, edited by Isaac Asimov.) I dearly love my Avon paperback editions, which are sturdy and well-read.

Read the entire article here. Or have a look at some of Andrew’s previous articles, including:

I also treasure my Avon copies. (Avon just put out nice paperbacks – the Brian Aldiss edited anthologies, the Abraham Merritt novels – Avon editions were always good looking and physically solid.) These Hall of Fame books are a great basic SF library. The only series I could compare with them is the six volume STAR anthology series edited by Fred Pohl.

Totally deserving of a Vintage Treasures series of their own. Thanks for the nudge.

One of the SF Signal podcasts (Three Hoarse Men) just did a show with Jonathan Strahan where they talked about anthologies at some length. In the comments, I mentioned the Brian Aldiss anthologies — I haven’t read Perilous Planets or Evil Earths, but I remember Galactic Empires very fondly. Plus he did a non-Avon one called Space Opera. It didn’t look as nice but had a solid table of contents.

I dug up my copy of Galactic Empires. Time for me to feature these books here, I think.

I remember reading Rebel of Valka in Galactic Empires 1 and just being totally taken by the image of horsed cavalry boarding giant, ancient ships. I eventually tracked down the four novels he wrote (based on the short story) but they didn’t quite capture the magic of the short story.