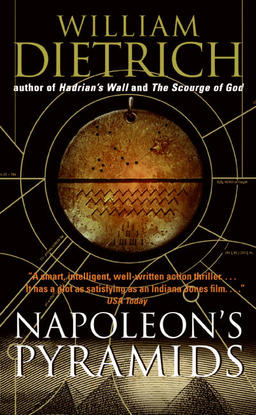 Over on his blog Of Swords and Plumes, Lawrence Schick takes a look at the Ethan Gage Adventures, a promising new historical action series from William Dietrich.

The series is set in the Napoleonic era, and is clearly modeled, at least in part, on George MacDonald Fraser’s Flashman novels. Like Flashman, the hero is a self-described amoral rogue who gets drawn into every major fracas of his time. But Dietrich’s books are no mere homage to Fraser, as they have their own distinctive tone; Dietrich is pulpier than Fraser, and has fewer qualms about embroidering on history in the pursuit of outlandish action scenes or occult overtones.

Dietrich’s hero, Ethan Gage, is an American frontiersman, a gambler and opportunist who finds himself in Europe after attaching himself to Ben Franklin during his term as Ambassador to France. After Franklin’s return to the States Gage hangs on in Paris, playing the “Franklin’s man” card in the salons of the Revolutionary elite, charming the ladies with his tales of the American savages and doing parlor tricks with that new scientific toy, electricity.

In classic pulp fashion, Gage wins a mysterious Egyptian amulet in a game of cards, refuses to sell it to an ominous foreigner, and is soon being pursued through the Parisian night by mysterious robed figures led by a man with a snake-headed staff. That pretty much roped me in right there: equip your villain with a snake-headed staff, and I’m sold.

Lawrence’s most recent article for us was Compiling The Big Book of Swashbuckling Adventure, on his upcoming anthology from Pegasus Books. Read his complete review of Napoleon’s Pyramids here.

Napoleon’s Pyramids was published in paperback by Harper on April 24, 2012. It is 400 pages, priced at $14.99 in trade paperback, and just $1.99 for the digital version. The sequel is The Rosetta Key and the most recent volume, The Three Emperors, brings the series to seven volumes.

John,
Though I find the Ethan Gage novels entertaining fluff and perfect for a long plane flight, I found two of his earlier historical novels much better – “Hadrian’s Wall” (set in 4th century Roman Britain) and “The Scourge of God” (set in the 5th century and revolving around Attila). Dietrich is a very solid historical novelist, and if not up to the standards set by Bradshaw and Sutcliff, still on my must-buy list.
Chuck

I initially read this as “snake-headed slaves”, which I suppose would be bending historical accuracy a bit much.

[…] points to several recent titles, including William Dietrich’s Ethan Gage books, and a sparkling new translation of Dumas’ The Three Musketeers. He also […]