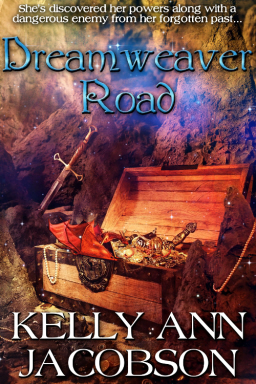 Know what I’ve always wanted to see in a past-lives-intrude-on-present story? A protagonist who finds out about her past lives and, instead of taking that as an immediate mandate to robot out the dubious decisions of her previous selves, tries something new. Were you married to someone in a past life? Okay, but that doesn’t mean you have to marry him again. I mean, what if he was a thug or a dud? If a story’s world dictates that people are supposed to improve themselves, right their wrongs, grow as spirits as they progress through their incarnations, I would like to see reincarnation used for something other than an idiot plot, a transparent cheat on the part of so many authors. If some old decision is going to get remade, it should have to earn the remaking. For pete’s sake, somebody write me a reincarnated skeptic!

And now I have what I’ve always wanted.

If Kelly Ann Jacobson’s sequels to the slender YA volume Dreamweaver Road can keep up what’s working here, we may get to read a story that happens to include reincarnation without being shackled by it. Maybe that’s one of the things that can happen now, in this weird new age when writers like Chabon and Lethem have forced the mainstream to make its peace with genre writing enough so that an MFA candidate at Johns Hopkins can write fantasy openly. The MFA polish also seems to have resulted in a little more music in the sentences than YA novels generally have, which is all to the good.

Our heroine Zoey is a sixteen-year-old farm girl when she comes into her powers. She’s been picking those powers up gradually over many lifetimes, mostly by making mistakes that get her killed. At the book’s opening, she remembers none of those other lives and the mistake she’s looking to set right is one she made just a year ago.

She thinks her quest is to find her best friend, who was stolen away by an unknown enemy that seems to have guessed wrong about which kid had the magic. It’s bigger than that. Much bigger.

When we meet Zoey, she’s been driving the truck she stole from her daddy’s farm for about 3,000 miles on no fuel but her own will. She has chased down every kind of magic she can find on the Internet, and though much of it is real, little of it is exactly what it claims to be. When the secondary characters she meets give her advice or show her who she used to be, Zoey has reason to doubt them. Indeed, two characters who seem to be sincere allies tell her conflicting information about a key detail; either one of them is wrong, or one of them is lying. Indeterminacy is a really good sign for the success of the series, and I’m rooting for Jacobson, hoping she can continue to resist the temptations of the classic reincarnation story pitfalls.

Let’s set aside the potential pitfalls a moment and talk about the Cool Stuff. I mean Cool Stuff as a technical term, as used in the Cool Stuff Theory of Literature, coined by Steven Brust. So if you think a dragon that’s been shrunk, against its will, to the size of a runty labrador retriever, and that is now dangerously irked about it, makes a cool traveling companion for our heroine, you will like this book. If reading about a protagonist who might very well die at any point in the story, because she’s died so many times before, is cool, then this could be for you. If you think cat sidekicks with sarcastic body language are cool, you’re in the right place.

Looking at the book as a physical object, you might not guess that it has grown-up-quality cool stuff, because this slender little book is so slender that it looks more like a middle-grade chapter book than like a YA novel. Dreamweaver Road weighs in at 76 pages, with a page design rich in white space, such as you see in books for younger readers. Yet if you handed the book to a kid actually in the middle grades, that kid would probably miss most of the emotional weight of Zoey’s discovery that a past-life husband she can’t remember and doesn’t trust has been waiting for her to reincarnate and come back to him. That character could be incredibly romantic, or incredibly creepy, or both, depending on which of the conflicting clues early in the book turn out in later volumes to steer us right.

The book’s brevity makes it feel more like Part I of Volume I than it feels like Volume I of a series. I would love to know what the rationale was for that decision. Nonetheless, it’s a promising start and I commend Dreamweaver Road to anyone who’s looking for YA fiction that’s just a little different.