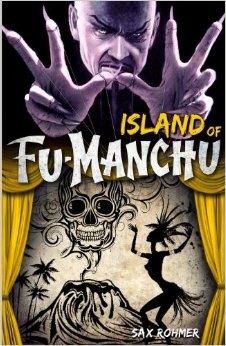 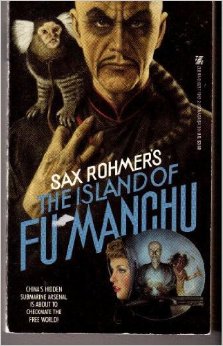 The final quarter of the novel sees Rohmer really deliver the goods with Kerrigan and Sir Denis Nayland Smith successfully infiltrating the Haitian voodoo ceremony of Queen Mamaloi. While similar scenes had occurred in the past at various clandestine gatherings of the Si-Fan, the sequence most closely resembles the gathering of the followers of El Mahdi in 1932’s The Mask of Fu Manchu. Rohmer’s mastery of the art of suspense writing makes the reader believe the heroes are in genuine danger. While this is no small feat, considering the number of times Rohmer had penned similar scenes in the past, part of the success here is down to the climactic revelation of the voodoo Queen Mamaloi.

Finally making her grand entrance in the novel, Kerrigan immediately recognizes the voodoo queen as none other than Koreani, the daughter of Fu Manchu. Longtime readers know the character better as Fah lo Suee, but it is as Koreani that Kerrigan first encountered her in the previous book and continues to address her as such here. This sequence harkens back to her first appearance in the third book in the series, 1917’s The Hand of Fu Manchu, where a teenaged Fah lo Suee (unnamed at that early juncture) masqueraded as Our Lady of the Si-Fan. Completing the deception here, the voodoo ceremony sees Queen Mamaloi invoke the pagan serpent god Damballah, who addresses his followers in a voice Kerrigan immediately recognizes as belonging to Dr. Fu Manchu. Just when it appears Rohmer intends to depict voodoo as mere trickery preying upon primitive superstition, Kerrigan is transfixed to see a disembodied green-skinned hand floating towards him and identifying the journalist and Sir Denis as spies among the followers of Damballah. 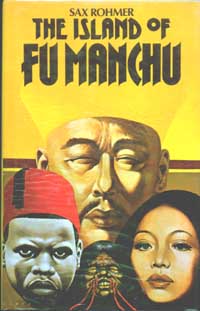 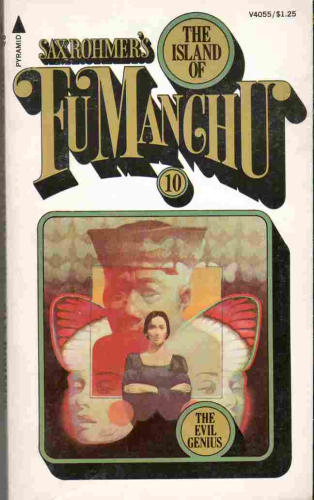 When Kerrigan recovers consciousness, he finds himself in the Si-Fan’s base of operations in Haiti. Here Rohmer shifts from supernatural thriller to something much closer to the spy thrillers which would soon overtake the genre in popularity.

Throughout the novel, Rohmer went to great pains to emphasize that despite its Eastern origins, the Si-Fan was an international organization. Kerrigan’s introduction to the many high-ranking European scientists who now serve the Si-Fan only reinforces this fact. This is far and away the most successful portrayal of the secret society’s inner workings Rohmer ever depicted. The pseudo-scientific mastery of zombies using his catalepsy-inducing drug, brain-washing, and the destructive force of the Ericksen Ray (first introduced in 1919’s The Golden Scorpion) combine to make Dr. Fu Manchu appear a more daunting force than ever before.

Kerrigan’s reunion with Ardatha, now freed of Fu Manchu’s mind-control, is the greatest temptation yet to sway the journalist into serving the Si-Fan. The offer for Kerrigan to join not only appeals to his investigative desire for knowledge in learning what has happened to so many scientific geniuses and statesmen the world believed dead, but also would return to him the one woman he truly loves. Of course, Sir Denis Nayland Smith and Sir Lionel Barton, the veteran heroes of the series, are quickly on-hand to spare the younger man from having to make such a fateful decision himself.

In true Rohmer fashion, the conclusion barrels along at a breakneck pace and sees the lovers reunited and, against all odds, Smith and Barton survive and foolishly believe once more that Dr. Fu Manchu has perished in the sudden and unexpected collapse of his ambitious scheme. The book is my choice for Rohmer’s final classic Fu Manchu thriller. It is remarkable, considering that the author was now in his late fifties and had written ten novels about the character over the course of nearly thirty years, that he was still successful in delivering formula fiction that was never less than entertaining.

What is more, in adopting a real-time chronology, Rohmer had moved his characters to keep pace with world events and even allowed for tantalizing gaps in the series continuity which has allowed other writers (Matthew Baugh and Rick Lai among them) to speculate upon what might have happened between the gaps in the narrative in this fruitful and fascinating period in the series. Rohmer would continue the series until his death in 1959, but the post-war books and short fiction saw a drop in quality as both Fu Manchu and Sax Rohmer seemed more and more to be men out of time in a Cold War setting.