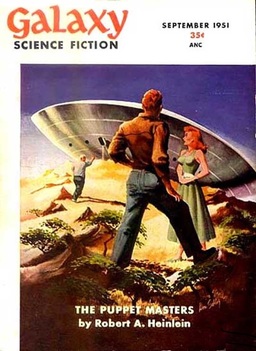 Galaxy concluded its first year of publication with this issue. Horace (H. L.) Gold notes some interesting stats in his opening remarks. He mentions that about 60 stories were selected from submissions of about 3,000. That’s a 2% acceptance rate, which is better than Duotrope reports for some professional magazines today.

Still, if you’re an author planning to travel back to 1951 to try your chances on getting into Galaxy, bear in mind that you’re up against some of the founders of science fiction. It’s you vs. Heinlein; you vs. Damon Knight. That might prove more difficult than inventing a time machine.

The Puppet Masters (Part 1 of 3) by Robert Heinlein — Slug-like aliens attach themselves to human hosts and take control of their minds. They begin an invasion by controlling key individuals, city by city, steadily working their way toward the President of the United States.

A government agency, led by the Old Man (as he’s called), works alongside two of his best agents, code-named Sam and Mary. The three of them try to capture a live specimen in order to learn more about the threat and to convince the President to quarantine vast areas of the country. But with so many controlled government leaders assuring the President that there is no danger, it seems impossible to defeat the puppet masters.

I’m familiar with this story from one of its movie adaptations. This story set a standard for parasite-controlling creatures. It’s a frightening concept, not too far from the notion of zombies; in both cases the individual is lost, reduced to involuntary responses. 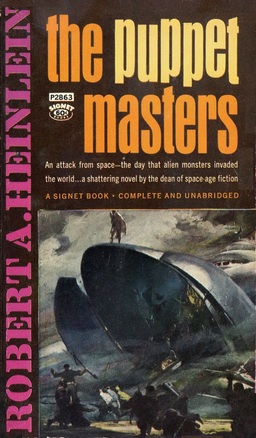 The Old Man is the best character, followed by Sam. Mary seems a little flat, but a lot of writers of these early Galaxy stories seem to only explore a female character’s physical appearance rather than spending words on who they are. For example, here’s part of Mary’s intro:

A long, slender body, but pleasingly mammalian. Good legs. Broad shoulders for a woman. Flaming, wavy hair… Her face was handsome rather than beautiful.

Granted, we can perhaps chalk this up as simply part of Sam’s character (who is narrating), but these kinds of descriptions start causing eye rolls after a while.

“The Sense of Wonder” by Milton Lesser — Rikud and his companions live in a compact world of predictable schedules and moving stars. Except that one of the stars is getting much brighter. Rikud begins to wonder if perhaps things are changing, despite the insistence from others that there is no such thing as change.

One day, the viewport reveals a garden, similar to the one they have, which makes little sense; where are the stars? Convinced that change could be real, Rikud begins exploring their small world, opening doors that have never been opened, and discovering the truth.

I enjoyed this tale because it’s one where the reader understands the situation immediately and watches the characters trying to unravel the mystery. I felt like smacking some of them at points (as Lesser no doubt intended). It’s a fun premise, nicely delivered.

“If You Was a Moklin” by Murray Leinster — Moklins are a friendly race, showing great hospitality to the humans who live on their planet. In fact, Moklins can evolve their appearance with each generation, allowing them to compliment their human visitors with children who resemble them. But could the compliments be mounting into something threatening?

I loved the narrator’s voice. The pacing was just right with a great ending. The story was adapted for the radio show “X Minus One” in 1956; I’d love to listen to that broadcast when I have some time. 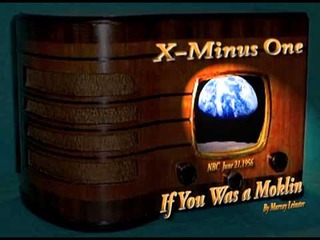 “Cabin Boy” by Damon Knight — Tommy Loy is as close as we can come to pronouncing the name of the alien protagonist. Tommy is essentially shaped like a large egg and travels as part of a ship’s crew, roaming the universe. They collect metal to consume and happen to discover a human ship.

Tommy encounters the humans first-hand and realizes they are intelligent, but his commanders believe there is nothing special about their latest metallic discovery and slowly dissolve its outer shell. Though Tommy knows he may draw considerable wrath from the captain, he cannot idly watch as the ship is destroyed, killing the human occupants.

This was my favorite story of the issue. The aliens were very alien, yet I could still connect with Tommy. It was interesting to see the point of view switch between Tommy and the humans, though I preferred the narratives that were centered around Tommy’s view.

“What is POSAT?” by Phyllis Sterling Smith — A small advertisement claims that mastery of all knowledge can be yours, courtesy of The Perpetual Order of Seekers After Truth, an ancient secret society. Donald Alford, a research physicist, notices the ad and decides to follow up, hoping to expose a hoax. He’s surprised to see where each correspondence with POSAT leads, especially when he’s invited to meet its Grand Chairman in person. 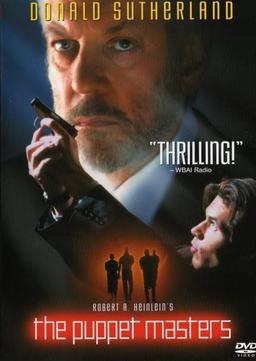 The beginning of the story was really interesting, and I liked seeing several characters approaching the ad in their own manner. Ultimately, the story centers around Donald Alford, and while the story still moves along at that point, it seemed like there was something missing. Not that I disliked the story; I think I just wanted something different toward the end.

“The Biography Project” by Dudley Dell — The Biofilm Institute uses special cameras that can record the past. Teams of historians, biographers, and others record history in exact detail, focusing on well-known persons of interest. They can use such information to find out exactly why people behaved the way they did, especially those who seemed to go off the deep end for no known reason.

This was a very short tale with a nice idea wrapped up in tidy, twisting fashion. This story was apparently scheduled too late to be included on the contents page. I think I’d feel a little miffed if that was my story, but I don’t think it bothered Dell.

Wondering why? Get ready… Dell is better known as Horace Gold.

How’s that for a twist ending?

Matthew Wuertz’s last retro review for us was the August issue of Galaxy Science Fiction.

I never know what to expect from Robert Heinlein. I loved “Have Spacesuit, Will Travel” from F&SF in 1958. The G rated narrative was a nice change of pace from the usual material. “Starship Troopers” was great blast-em-up fun. I read “Stranger in a Strange Land,” mostly because I like the Triumph song by the same name, and did not see much to like. I am not much on Messiah parables, I guess.

“The Puppet Masters” falls somewhere among those three. The characters are mostly archetypes, especially the girl who is there mostly to be ogled repeatedly. The narrative is what makes this a winner. Only a science fiction story can make going undercover this interesting and dangerous.

The archaic phrases (“”In a pig’s eye,” I said politely”) and desperate use of the president as a character made this less than a classic to me. I am excited, if not dying, for more.

I had no idea this was made into a movie. Donald Sutherland will always be Professor Jennings to me.

“Moklin” has the great distinction of giving me a truly surprising ending. I REALLY did not see that coming! The story does progress nicely and sort of predictably, probably on purpose to set the reader up for the shock. Another great adventure tale.

“The Sense of Wonder” was my favorite of this issue. Yes, we know what is going on from the beginning, but the Dick-and-Jane narrator does not, much to our frustration. What an interesting way to build suspense and tension! Ahh, the unopened door, which Hitchcock said was the scariest thing imaginable. How scary would it be to open that door for Rikud?

“Cabin Boy” was a close second for me. Two great narratives come together in what I saw as a moral dilemma in which two entities are fighting for life. Both need the ship, one for resources (though not imminently), one for the shelter and the oxygen. The characters are nicely developed and the egg is the only one who has enough empathy to try to prevent what many would consider murder. Very thoughtful stuff.

Remember the episode of Seinfeld where Jerry mentions that nature shows can get you to cheer for either the predator or the prey? If the show is about wolves, then you want that wolf pup to catch the rabbit so it can survive a few more days. If the show is about rabbits, however…

I didn’t really get “POSAT.” It almost seemed like a long advertisement for the Rosicrucians, who advertised heavily in these magazines. The revelations that cause Donald to sign up in the end were not, in my opinion, as convincing as the author intended.

Gold’s “Biography Project” was amusing. Why not fill a couple of empty pages with your own story? Thanks for the research here, Matt! Spying, indeed.

See you next month. Always fun to share opinions and exercise my writing chops.

Gus, thanks for sharing your thoughts!

The Donald Sutherland version isn’t bad; not a good film either, but I’ve seen worse. It retained a decent number of elements of the story (at least the first third of the story that I’ve read). I recall that the female character’s “test” in the movie was to wear a loose blouse and lean way over a desk. If the guy she spoke with kept eye contact, then he was controlled.

In case you don’t have the X Minus One episode, you can find it here at the Internet Archive: If You Was a Moklin

I’m guessing you have it, but just in case, I thought I’d share the link.

Also, the Internet Archive has most issues of Galaxy. For those who’d like to read the great stores you’re reviewing, you can find them here: Galaxy Magazine The issue you reviewed is here: Galaxy September 1951

Zachary, thanks for sharing!

Matt: I would fail the blouse test. Just sayin’. I would enjoy taking it but there is no way I could keep my eyes forward. Any guy who could is definitely under some sort of mind control.

Zach: The Internet Archive is a beautiful thing. I have spent hours watching British public service announcements from the 1950s. They also have all of the footage that aired from each of the big networks as the 9/11 events unfolded. Sobering stuff. You can find anything there. It’s like the internet’s internet.

However, there is nothing like holding an actual copy of Galaxy from February 1951 as you read it (not that I have found one yet). No electronic rendition can match it. Having said that, however, what a great resource for anyone who does not want to handle their precious copy, or for a casual fan or researcher. Thanks for the tip.