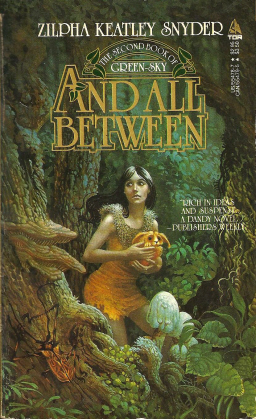 I love doing these Vintage Treasures articles. I could tell you they’re popular, or they bring some historical weight to the blog, but really, they’re just an excuse to scan some of my favorite old paperbacks and happily yak about them for a few paragraphs. It’s the simple things that keep you happy.

But every once in a while, it’s interesting to feature a book, and an author, that I know absolutely nothing about. And that’s the case with today’s subject, And All Between, a 1985 paperback from Tor and the second volume in the Green-Sky trilogy, by an author I’ve never heard of:  Zilpha Keatley Snyder.

I picked it up in the Dealer’s Room at Capricon 34 two weeks ago. I bought it from Erin and Rich at Starfarer’s Despatch for two bucks, because the cover was so gorgeous that I couldn’t say no. I mean, just look at it.

Yes, it’s the second book in a trilogy. But that just makes it more intriguing to a paperback collector like me. Now I have two more to track down. Sweet! I hope their covers are just as luscious (turns out, they are.)

To be honest, the back cover text kinds of make the novel sound like an episode of The Smurfs, which isn’t really a selling point.

The Erdlings live in the underground world below the magical root — banished there forever by the Ol-zhaan, supreme members of the Kindar, who live in the lofty branches of their forest home in Green-sky.

The Erdlings are starving and escape through the iron-strong root is impossible. Yet, when eight-year-old Teera learns that her pet Lapin must be used for food, she runs away — and climbs through a break in the root to the forest floor above.

Rescued by Raamo, the newly chosen Ol-zhaan, Teera enters the seemingly peaceful world of the Kindar… and unknowingly embarks on a dangerous adventure on which hangs the future of Green-sky, and the world below the root.

But that’s okay. The plot and cover remind me in some ways of the novels of Clifford D. Simak, and that’s a good thing.

Once I got home from Capricon, I did a little research on Snyder, and found she is a Newbery Honor nominee with over 40 books to her credit — and she’s still writing at the age of 86. Her most recent novel, William’s Midsummer Dreams, was released in 2011.

The books bracketing this one in the Green-Sky trilogy are Below the Root and Until the Celebration. Artist James C. Christensen painted all three covers as part of a single sprawling piece that was cut into individual pieces to create the cover for each book.

Snyder is hardly an unknown author, so I’m a little embarrassed I didn’t know anything about her. Her other novels include the Stanley Family series (starting with the Newbery Honor book The Headless Cupid, published in 1971), The Changeling (1970), and The Witches of Worm (1972), another Newbery Honor book. 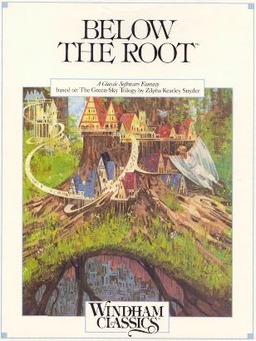 This isn’t her only fantasy series, either, so I don’t even have that excuse. Her 1967 novel The Egypt Game was about an elaborate fantasy role-playing game played by a group of children, and The Ghosts of Rathburn Park features a ghost dog. She’s also the author of Black and Blue Magic (1967), The Princess and the Giants (1973), The Treasures of Weatherby (2006), and The Bronze Pen (2008).

The Green-Sky trilogy appears to be her only books released by a genre publisher, so that at least explains why I haven’t come across her before.

The Green-Sky trilogy is highly regarded and has been reprinted multiple times over the past few decades. All three novels are currently available in digital format.

Years ago, I purchased a fantasy adventure game titled Below the Root, published by Windham Classics, the same company that produced high-quality adventure-game adaptions of Treasure Island, Swiss Family Robinson, and The Wizard of Oz. I had no idea the game was based on the first novel of the Green-Sky trilogy or that it was developed in close collaboration with Snyder.

Read more about the game version of Below the Root (with screenshots) at The Adventurer Gamer blog.

And All Between was published by Tor Books in 1985. It is 252 pages in paperback, originally priced at $2.95. It is currently out of print, but digital versions are available.

How cool that you found that paperback and you had the old game it was based on. As a fellow collector I love stuff like that. Good luck hunting down the other two. In checking I have one of Snyder’s books in my collection – and old Scholastic called The Velvet Room – http://www.amazon.com/Velvet-Room-Zilpha-Keatley-Snyder/dp/B000I3C5S4/ref=tmm_mmp_swatch_0?_encoding=UTF8&sr=&qid=

I can also highly recommend Snyder’s _The Egypt Game_. Excellent book to hook the YA crowd.

…and to anyone looking for Starfarer’s Amazon store: should be back up today after Capricon.

It takes us a while to do inventory when we get back from cons (perils of also having day jobs.)

Every time I see Snyder’s name, I think of Andrew Plotkin singing, “Zilpha Keatley Snyder went up the waterspout…”

I still find it hard to resist singing the song that way to kids.

Whew! That’s a classic. A few years ago I started collecting some of my favorite Scholastic Books from my youth, like THE RUNAWAY ROBOT and HOW TO CARE FOR YOUR MONSTER, but I never came across THE VELVET ROOM.

One of the things I find fascinating about this hobby is how small it is. Here I found a fantasy paperback from the 80s, and discover the first volume was the basis for a computer game I bought a few years later, and the author also wrote for the publisher I adored in middle school.

I sometimes run into well-read fantasy fans, only to find that we have read absolutely NO BOOKS in common. When a genre can turn readers into life-long fans with so many different books, that’s evidence that you have a very rich hobby, I think.

> I can also highly recommend Snyder’s _The Egypt Game_. Excellent book to hook the YA crowd.

I should have asked you about it when I bought the book from you!

> and to anyone looking for Starfarer’s Amazon store: should be back up today after Capricon.

> Every time I see Snyder’s name, I think of Andrew Plotkin singing, “Zilpha Keatley Snyder went up the waterspout…”

Everyone knows about this writer but me, then. 🙂