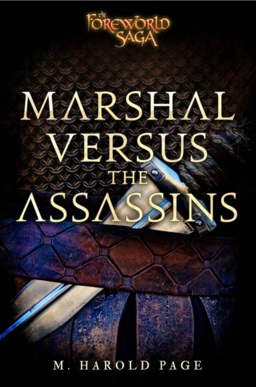 Of the many excellences in Marshal Versus the Assassins, M. Harold Page’s story of a real historical crusader trying to avert a crusade, the most remarkable is Page’s rendering of physical combat. There are so many reasons this stand-alone adventure in the Foreworld Saga could be subtitled Don’t Try This at Home.

Since you’re here reading Black Gate, odds are you’re a fight scene connoisseur. You’ll have read some classic set-pieces, and some classic blunders. You may even have read this post, which discusses the biggest pitfall most writers face when they set out to learn how to write a fight scene: the counterintuitive way a blow-by-blow approach to even the most exciting events can turn tedious. Writers who overcome that problem generally do it by intertwining the physical blow-by-blow fight choreography with the things fiction can render and film can’t — most of them aspects of the viewpoint character’s inner life.

What Page does more and better than any other fantasy writer I know is intertwine the viewpoint character’s complete sensory experience during combat. As a practitioner and historian of Europe’s lost martial arts traditions, Page knows in muscle memory how each weapon his crusader characters use feels in the hand, in the heft, and in the mailed body it strikes. All of us who write fantasy that includes fight scenes try to convey this kind of sensory vividness and immediacy. The difference in results between a writer who’s relying on research or imagination and a writer who has dedicated years to mastering the things his characters have mastered is immediately apparent.

I love reading a book that I couldn’t have written, one that displays writerly chops totally different from mine. Of course, the thing Page makes look easy that I struggle with as a writer is not the only virtue of this book.

For instance, there’s the delightful blank spot in history that Page imagines his way into.

William the Marshal was a real historical figure, one his contemporaries called the greatest knight who ever lived. Strangely, the part of his life in which he earned that reputation is almost entirely lost to the historical record. The personal integrity and political practicality of his later years are out there to be found, but what did he do as a young man that won him the royal respect and trust that launched him from his beginnings as a landless knight to his position as regent and protector for a child king?

Why did they call him the greatest knight who ever lived? Well, what if his most important exploits were secret missions? What if the mystery of his reputation was grounded in a capital-M Mystery of the supernatural sort?

Page’s Marshal wins the Horn of Roland for his master in a tournament. It’s not just a treasure here, it’s a relic of supernatural power. In legend, the horn will summon an army if it’s sounded by a great Christian knight in mortal peril. Page takes that legend a jumping-off point, and proposes that such a divine intervention would be more catastrophe than miracle.

A relic with that power could set off a crusade. A knight with real experience in battle, one who had seen firsthand the horrors of war, might want to prevent crusades, not start them. In this sense, the Marshal is a character a modern reader can root for, though Page does not spare us William’s moments of joy in battle, nor his faith that his God requires and approves certain acts of war. Human suffering is not a casual matter for Page, or Marshal, and the book won’t allow it to be a casual matter for the reader.

The relic chooses Marshal as its protector, and at times it seems the horn hopes it will not be sounded. In the world of the story, the relic is a vehicle of the miraculous, and the closest thing we have to an expression of God’s will for the characters and their nations. The relic does not want to start a war. To protect it from being sounded and bringing a new round of escalating horror to a Holy Land that seems to be in a moment of relative equilibrium, Marshal has to dodge fighting monastic orders, both Christian and Muslim, that believe they would benefit from an expansion of hostilities. He also has to trust and aid some unlikely allies. Though the world of the story is a medieval Christian world, there are no simple delineations of good and evil. What good and evil there are appear in the human world across lines of nation and faith.

Marshal Versus the Assassins is not for everyone. The violence is realistic and vivid. I would not label it as graphic, because that’s a word often used for works that merely glorify violence. What Page is up to here is showing the moral, personal, and physical complexity of violence in a specific worldview and a specific historical moment. There is glory, in that there are characters who endure ordeals, take risks, and sacrifice of themselves for the well-being of people who cannot defend themselves. If that’s not glory, then I think nothing is. There may arguably be glory in hard-won prowess exercised in accordance with a stringent honor code. Whether that’s glory or not, it does make for an exciting read.

But what makes this violence more than merely glorious or entertaining is that the Marshal struggles with its costs. Violence costs him, the fellow knights who trust him, and the innocents who stumble into the path of the plot, and it certainly costs the adversaries who face him on the field of battle. Honor alone cannot justify it to him. His vows — and he becomes entangled in a great many vows before the end of this slender volume — are not enough to justify it. It’s service to the innocents, among whom he can never again be numbered, that make this character believable as a man who could be called the greatest knight who ever lived.

[…] eras and write adventure stories in the tradition of my favourite writers. Better yet, for Foreworld I bagged my hero William the Marshal and the War of the Roses books let me paint German Longsword as the ultimate martial […]

[…] the twelfth year coming was sure to unleash war. The alternate history in M. Harold Page’s Marshal Versus the Assassins was much more familiar — basically our own, with the addition of a few conspiracies and with […]

[…] The Series Series: Marshal Versus the Assassins by M. Harold Page […]

[…] and Adrian Tchaikovsky, but also a growing proportion of the newer writers like me (my fight scenes trigger your mirror neurons, apparently…), so much so that almost all the writers of the Foreworld Sidequests also have […]

Sunday Surprise | creative barbwire (or the many lives of a creator)

[…] my fight scenes trigger your mirror neurons. I also do a good […]

[…] with you, but they are not you. Sure, we aspire to some of what they have (and I wish I could fight like William Marshal could), but mostly they are the wise friend we’d like to have to drag us out of our self-dug […]