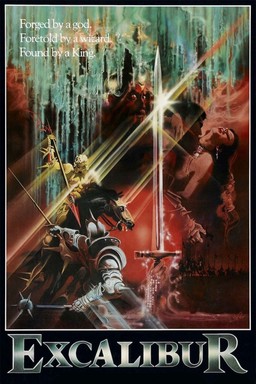 First, I should say how delighted I am to be blogging here at Black Gate. Not only are the companions first-rate, but I’m thrilled to be able to talk about some of my favorite things: heroic fantasy, sword and sorcery, and mythology.

I came into fantasy the way a lot of people did: via Star Wars. Prior to that, I read almost exclusively hard science fiction, where the aliens and the spaceships were the point of the story, not window-dressing. But among the many other things Star Wars did for me in 1977 was nudging me into those realms of magic where not everything was concrete (or metal or plastic).

Once inspired, I read The Lord of the Rings like everyone did, although I confess that the microscopic font in the paperbacks almost scared me off, as well as the textbook-like appendices. Marvel’s Savage Sword of Conan comic led me to the original Howard stories, which I loved. But the thing that finally turned me into a bona fide, full-bore fantasy fan was Excalibur.

It came out the Summer after I graduated from high school. Much like music before Elvis, unless you know what fantasy movies were like before this, you can’t appreciate what an eye-opener this film was. Up until then, the only fantasy films around were family-friendly knock-offs of Star Wars, all aiming for that same market and all telling essentially the same story of a simple young man who sets off on a great, mostly chaste and bloodless, adventure.

Excalibur didn’t just boast sexy girls, it featured real sex. The battles were were filled with impaled knights and severed, blood-spurting limbs. The mysticism had the dark, heavy quality of church liturgy, nothing like the breezy simplicity of the Force. And in place of the serene Obi-Wan Kenobi or Gandalf, you had a Merlin who was half sage, half clown, and never as smart as he thought he was.

But the visual depiction of King Arthur was probably the single thing that changed my whole idea of fantasy.

Up until then, the King Arthurs I’d encountered had been handsome, clean-cut heroes, the kind who dwelled in storybooks and Disney movies. But Nigel Terry’s Arthur had long unruly hair (a bit like my own at the time), and beard more like a biker’s than a bard’s. And he was young: somehow the idea that King Arthur was ever a young man had escaped me.

I realized then that heroes didn’t have to be Luke Skywalker; later, I would understand this as an unconscious rebellion against the omnipresent Hero’s Journey that permeated fantasy after Star Wars. Sure, there’s an element of that in Excalibur during its depiction of the teenage Arthur (also played by Terry; his range in this film is really exceptional and often overlooked). But Luke never got to grow up; Arthur does, and even grows old (and is still played by Terry).

So the path that started with Star Wars and found its true direction with Excalibur has now brought me to Black Gate. Nearly forty years of being a fantasy fan, and almost that long being a fantasy writer, trace back to the Summer of 1981. And King Arthur has become an integral part of my fantasy world (I even wrote my version of him in my novel, Dark Jenny).

So someone put on “O Fortuna” and lets ride into battle, shall we?

The movie can be a mess, but it does hit some things in Arthuriana that a lot of movies and adaptations leave out.

But, then, this is Boorman. Odd stuff is his stuff in trade.

Is is a mess, Paul, but so is Malory. It’s a big pile of stories that don’t really come together, except that they do. Only T.H. White managed to tell the whole story in a way that worked as literature; John Steinbeck might have, had he lived to complete his Arthurian work.

And yeah, Boorman. “Zardoz.” :Exorcist II.” Love ’em both, but they’re both out there, and only work on their own terms.

I didn’t appreciate Excalibur enough in my youth (beyond Igrayne’s dance and Arthur’s conception, that is). I wanted it to be a Conan story, with more Arthur lopping things off with the sword. Only once I’d done more reading did I begin to appreciate it. It’s wonderful, inspired, and slightly mad Grand Guignol opera.

I can’t tell you how often I’m paging through my music collection on the iPod and I say “screw it, I’m listening to the Excalibur soundtrack again.”

EXCALIBUR was a watershed moment for fantasy movies. I was only 10 when it came out, but when it hit HBO a couple years later, it became a legend among all my middle-school fantasy-loving friends. One of those movies you’d stay up into the wee hours to catch, and watch any time it was on. Kind of like CIRCLE OF IRON and THE ROAD WARRIOR. It still stands as one of the best sword-and-sorcery movies ever made. Gorgeous, creepy, and mythic.

Yeah, for all its messiness, it’s a blast. Nicol Williamson is a hoot.

What makes Malory so irresistible to later writers is precisely that it is a mess. The dreamlike imagery that feels true, combined with little plotlets that make no sense and a master plot with a tragic ending, just calls out for someone to come along and fix it. Of course, versions that do fix it are less satisfying to read than ones that preserve the weirdness. Excalibur is plenty weird.

King Arthur, like Robin Hood, is too big a collection of stories to fit into a formulaic movie without diminishment. Its mainly an oral story, such as a bard would tell, to stretch over several nights, weeks, to keep them interested in him and keep feeding him, then he moves on and tells it elsewhere, not finding insane boredom in it himself because the tales are so grand and complex.

Having said that, I loved Excalibur. Some things they changed, like the Grail. But it was pretty true to the spirit of things, and did his origin spot-on, not glossed over like it never happened like Disney.

There seems to be an earlier movie of Sir Galahad and the quest for the Holy Grail, but still only on VHS. If you YouTube In Search Of, the Holy Grail, they go over it in the middle of it, the edit and Lenord Nemoy’s voice making it incredible.

Excalibur is the greatest Arthurian movie that doesn’t involve an enchanter named Tim.

(Having said that, pro tip: If you’re doing a double feature involving both Excalibur and Monty Python, watch Excalibur first.)

I hate that movie. The “O Fortuna” ride and the knighting of Arthur were the only bits I liked. The second time I watched it was toward the end of my Arthurian Lit class, after having read Malory, Tennyson, and White. Not one person in class liked it.

Our follow-up, Monty Python’s Holy Grail, went over quite well. I guess if you were going to give us absurd, we wanted *really* absurd.

I don’t even care if it is anywhere close to anything it’s based on. I loved it when I saw it in the theater as a kid, and I love it when I re-watch it now.

I think Exaclibur was the first proper fantasy I saw. Conan etc were age restricted, but somehow my dad allowed me to watch Excalibur when my sister brought it home from the video shop she worked at. Still love the movie, the action, the music (Sigfrieds Funer March from the start etc), Uther Pendragon, The Merlin.

To this day when i think of full armour i cant help but to think of Excalibur.

One of my all time favourite movies!

[…] Gate we’ve looked at the film a few times over the years — most recently Alex Bledsoe Gateway Drug: Excalibur, and Ryan Harvey’s celebration of the 30th Anniversary Blu-ray […]