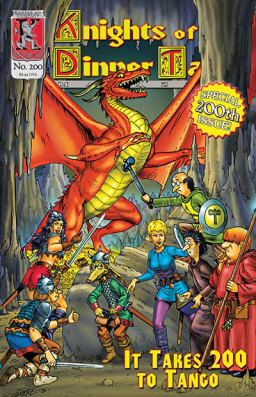 I am thrilled to report that Kenzer & Company, publishers of the fine Hackmaster and Aces & Eights role playing games, have published the 200th issue of the world’s best gaming comic, Knights of the Dinner Table.

Knights of the Dinner Table is written and drawn by my friend Jolly R. Blackburn, with editorial assistance by his talented wife Barbara. If Jolly’s name is familiar, it may be because of last Saturday’s appreciation of his earlier publication, the much-missed role-playing magazine, Shadis, where KoDT first appeared. Or you may remember the last time I shone a spotlight on KoDT, with issue #191 last September. Or maybe you’re a fan of the KoDT spin-off The Java Joint, which appeared in every issue of the print version of Black Gate, and was finally collected (with one new strip) last April. Or perhaps you’re simply a fan of KoDT all on your own, and don’t need me telling you how brilliant it is.

The first issue of Knights of the Dinner Table appeared from AEG in the summer of 1994. With issue five it switched to its current publishers Kenzer & Company, and it has appeared regularly ever since.

I don’t think I need to tell you what an incredible accomplishment it is for a comic to reach the 200 mark in today’s market — especially with the same creator at the helm. It is, in fact, an almost unparalleled achievement (the only comparable example I’ve been able to come up with is Dave Sim’s Cerebus). To reach issue 200 under any circumstances is an amazing achievement for an independent comic.

I wrote a book review column in the back of Knights of the Dinner Table for four years, starting in the late 90s (the incredible series of coincidences that lead to that happy state of affairs are related in my introduction to the collected Java Joint). I got to meet and game with Jolly, Dave Kenzer, Steve Johansson, Brian Jelke, Barbara Blackburn, and the entire KenzerCo gang — and let me tell you, I wouldn’t trade that experience for anything.

But it’s my contributions to and relationship with KoDT that I’m most proud of during that era. KoDT has survived not simply because it occupies a unique niche in the gaming community, but because it is a singularly brilliant work from a uniquely talented creator. If you haven’t tried it yet, the massive issue 200 is a great place to come on board.

KoDT #200 was published July 2013 by Kenzer & Company. It is $8.99 for a 96-page black & white comic. The cover is by Larry Elmore; more details and order instructions are here, or try the free online strips.

Probably the best story I remember about Knights of the Dinner Table was the “Russian Women Who Game” scandal. I still skim through my early issues from time to time.

How about everyone else: which KODT character do you most resemble?

You mean the issues that had this parody ad in the back?

As for which character I most resemble… I was always the DM, so I see a lot that’s familiar in B.A. Fenton. Although nowadays, I see a lot more of myself in their local game-shop owner, “Weird Pete” Ashton.

Apparently, they received a number of responses to that ad from readers who hadn’t realized it was a parody. I’ve met a handful of Weird Petes in both gaming and comic shops.