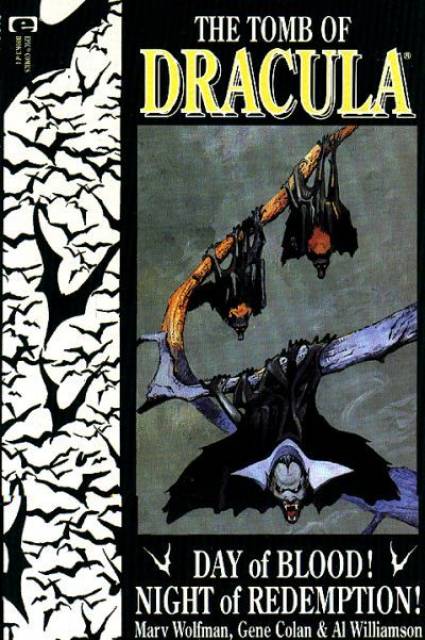 Marvel Comics’ mature readers imprint, Epic Comics, published a Tomb of Dracula limited series in 1991 entitled, “Day of Blood, Night of Redemption.” Marv Wolfman and Gene Colan reunited from the original series and teamed with Al Williamson to produce this visually stunning and highly ambitious four-part epic. The script faltered a bit by the end, as it really needed at least two more issues to realize its full potential; but this was an excellent effort and a welcome return to form that is deserving of more attention for its high standard of quality throughout.

The third issue gets underway with a quiet interlude shattered when a street gang makes the mistake of harassing the vampire after discovering him alone on the streets of Washington D.C. There is an unmistakable cathartic glee to the scene where Dracula literally drags the leader of the gang to his death. This is followed by a brief segment that establishes Katinka as having joined Frank Drake and Blade in their hunt for the vampire. Her character proves the necessary bridge to smooth the rough partnership rekindled between these two very different men. She also functions as a Van Helsing substitute, who is seeking a scientific cure for Marlene’s possession.

Marv Wolfman obviously felt the imposing weight of technological change in the ten years since he had last written the character and brings the same weight to bear on the vampire. Dracula pays a visit to Lila in her dorm at Georgetown University, where he succeeds in seducing her. Once under the vampire’s spell, the young woman eagerly steals all of Professor Smirnoff’s notes and introduces the vampire to the burgeoning computer age and the marvel of the CD-Rom in this pre-Internet story. While Dracula absorbs all of this information, he is dismissive of Lila. The sexually confused young woman believes she loves the vampire and willingly enters into an abusive relationship with him.

Sensing that Marlene is escaping his control, Dracula makes his way to Katinka’s laboratory, where he quickly defeats the over-zealous Blade. Frank makes a noble attempt to defend his wife, but it is Katinka wielding a crucifix who succeeds in burning the vampire’s face and driving him off. We learn that the young albino’s extreme condition is a result of Dracula having slain her mother during childbirth. Frank rejoices, believing his wife is now free of the vampire’s control.

A dying Dracula, whose skin has literally burned away after contact with the crucifix, repulses Lila when he returns to her dorm. Angered by her, he beats her savagely before finding the strength to venture out and slaughter the denizens of a restaurant near the campus. Lila has already communicated the vampire’s wishes via email and around the country more than 1,600 students partake in Smirnoff’s Satanic ritual three nights later, resulting in their mass suicides as they are consumed in flames. Dracula absorbs all of the psychic energy released by their deaths and uses it to save his own life. The issue ends with the revelation that Marlene McKenna is still under Dracula’s control, despite having succeeded in fooling her husband. 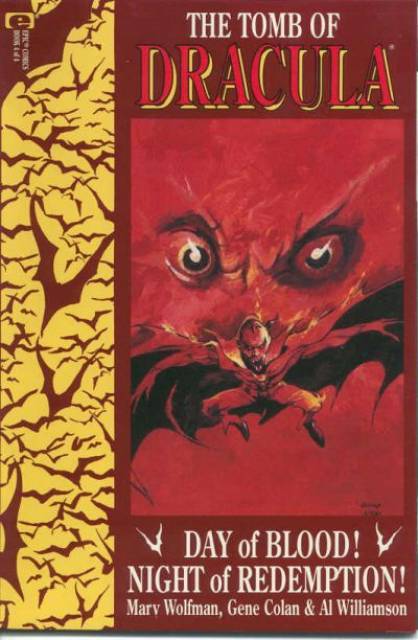 The fourth and final issue reveals that Katinka was well aware that Marlene is still under the vampire’s control. She seeks out Lila after learning she was Becky’s lover. The three vampire hunters enter her dorm room and discover Dracula’s coffin, but inside the coffin they find only Lila’s cowering form, for the vampire has escaped to Arlington Cemetery.

Marlene answers Dracula’s psychic call and joins him at the cemetery. The vampire harnesses the psychic powers of the souls of the dead students to revive a number of the dead at Arlington Cemetery to serve as his undead minions.

At this point, Marv Wolfman bizarrely introduces two new characters who were intended to play a pivotal role in the future had the series continued: an eccentric old British weapons-maker named Gossamer Jones and the ghoulish psychic detective Inspector Judiah Golem of the Washington D.C. Police Department.

Lila leads the newly-armed vampire hunters to Arlington Cemetery, where Frank again displays his newfound courage in fighting for his wife. Blade finally gets his chance to finish off the vampire and manages to mortally wound him, but is knocked unconscious by an enraged Lila. The dying vampire rewards her by savagely killing her and feasting on her blood to hold back death for a few more moments.

Frank bravely saves Katinka’s life and the two of them go after Marlene. A seemingly unstoppable Blade drags himself into the vampire’s path and very nearly finishes him off until the vampire’s cruel lies about the fate of Blade’s mother causes the vampire hunter to suffer a severe psychosis that leaves him mentally crippled. The dying Dracula attempts to absorb all 1,600 souls to avert his death, but the act causes his dying body to bloat and explode from the effort.

The abrupt conclusion sees Blade confined to a mental institution, while Frank and Marlene depart for a newfound life of peace, leaving Katinka and Inspector Golem to put together a new team to combat the forces of darkness that threaten an unsuspecting world. This rushed and not wholly satisfying conclusion still managed to pave the way for the series’ future in the title Night-Stalkers and in Blade’s own series. Marv Wolfman and Gene Colan would enjoy one last revival of the series for a rival publisher while Marvel would counter with their own effort at a traditional Dracula limited series amidst several attempts to update the property for the 21st Century. That, however, is a story for another day.