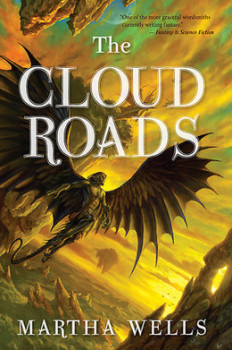 I was reading Martha Wells’ excellent The Cloud Roads the other day and I was struck, as I often am when reading something very well written, by how few explanations there were. One of the most difficult things writers of Fantasy or SF face in creating a new world, and alien beings, is to find a way to give their readers necessary information seamlessly, and Wells has done a great job here. There are plenty of things about the world of the Raksura I still don’t know and plenty that I had to figure out for myself. I know there are some readers who don’t want to do any work when they’re reading, but it’s a fact that you value and remember the information you had to work out for yourself a lot more than stuff that was just handed to you.

Yes, I’m talking about that old writing class cliché, “show, don’t tell.” And as important as that advice is when we’re creating sequences involving action and emotion, it’s doubly important when we’re handing out explanations.

Explanations have a bad rep, and justifiably. There’s the ever unpopular info-dump where all forward motion grinds to a halt and the author tells you everything you need to know – ever – about anything – or so it feels like. There’s the equally unpleasant and not-as-rare-as-you-might-hope “As you know Bob,” a dialogue oopsy, more cleverly disguised on TV than on the page. Don’t tell me you’ve never wondered why all those CSI guys tell each other what they’re doing all the time when they must already know. I know you have. But that’s the classic “As you know, Bob.”

There are situations (crime shows being one of them) where readers and audiences are becoming more knowledgeable about certain basics, to the point that explanations are no longer needed. But the unfortunate truth is that some of these back-handed ways of doing things still turn up from time to time, usually in the hands of amateurs in the field. The problem is that there are certain things the readers simply have to know and our jobs as writers is to find a way to tell them, without stopping the forward flow of the narrative and without having characters explain things to each other that they already know perfectly well.

One of the classic methods to take care of this is the “stranger in a strange land” device. We’re all familiar with it, but let me sum up: You’ve created a complex imaginary world; readers need to know just how this world differs from the one they live in; you use as your main character someone new to that world – often but not always from our world – who learns about the place as the story unfolds. Usually, the story is told from this character’s POV (as in Barbara Hambly’s early books) but Heinlein notably reversed it in Stranger in a Strange Land, by having the story told from every POV but that of the titular Stranger. 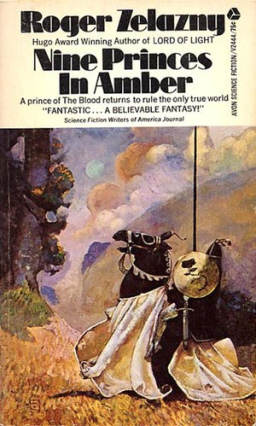 Roger Zelazny played with this device in his Nine Princes in Amber. He makes Corwin, the POV character, a first person narrator. Normally this means that all necessary information is at the readers’ fingertips: the accepted conceit is that the narrator is addressing the reader directly and can therefore simply mention any needed piece of information.

But in this instance, Corwin’s memory has been tampered with. At the opening of the narrative, he’s just become aware that he doesn’t know who he is. He’s the ultimate stranger – a stranger even to himself. The only thing he’s sure of is that someone has tried to kill him and that therefore he can’t trust anyone enough to simply ask them what’s going on. Imagine his frustration when he gives people openings and no one explains anything to him because they think he already knows it.

Oh, wait! You don’t have to imagine it, because you’re right there with him, experiencing everything at the same time he does – and figuring things out for yourself.

Aside: It’s been mentioned that the follow-up books in the Chronicles of Amber are less interesting than the first. I submit that this might very well be because, while they do satisfy the itch to find out what happens, that’s all they really do. The feeling of discovery, and the satisfaction that feeling brings, is gone.

Zelazny, it has to be said, is the King-Emperor of not explaining things. As he noted himself, his strategy when writing was to remove as much explanation as he could in rewrites. Please note the sequence of events: the information was there in the first place, but was removed in later drafts. It’s easy for writers to forget (at least this writer) that you yourself have to know everything you can about your world and your characters, even though you may not mention all of it in the final book. 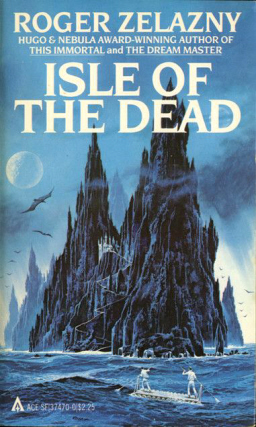 One of the best examples of this technique, where it doesn’t involve amnesia, is Zelazny’s Isle of the Dead. As with Corwin, Francis Sandow is a first person narrator and, like Corwin, he’s not exactly human. Sandow did, however, start out as human and his troubles arise out of thinking he still is.

Please note that the “stranger” theme continues – all of Zelazny’s characters are in some way strangers to themselves. It’s not my intention to discuss that here, nor to tell you more about the novel (if you haven’t read it, you should), but to discuss how information about the character was created, but not included in the final book.

In an essay in Unicorn Variations, Zelazny talks about creating “outtakes” for his characters, pieces that show something about them in some detail that may or may not find their way into the narrative. The short story “Dismal Light” is just such a piece about Francis Sandow, told from someone else’s POV, that tells us not only about Sandow’s background, but something about him as a man. Exactly the kind of something he wouldn’t be able to tell us himself in a first person narrative. This piece isn’t even referred to in Isle of the Dead, but Zelazny’s skill is such that we end up understanding this aspect of Sandow’s character just the same.

Which qualifies Zelazny as the absolutely ultimate artist of “show, don’t tell.”

I’ll be away for a while, at World Con and other events, but I’m planning to say more about information and explanations at a future date. See you then.

“Aside: It’s been mentioned that the follow-up books in the Chronicles of Amber are less interesting than the first…”

I think Guns of Avalon avoids this mainly because he expands the playground so much in this second volume. Chaos! Ganelon! Benedict!

I’d be inclined to agree in re Guns of Avalon, but not so sure about the others, especially the post-Corwin set. I know some do, but I don’t object to “unnecessary sequels” per se, it’s like having lunch with an old friend.

Funnily enough, I read the second series first (at least thirty years ago – ouch!) and was a bit underwhelmed, and the first series only recently. In a previous post on ‘Black Gate’, John O’Neill quoted a largely negative review of the first series and says he really enjoyed it himself, but admits this might have been his age (he was fourteen).

I only mention this because I think the context important. I wasn’t re-reading the first series. I’d never read it before – and it reminded me very much of why I like pulp fantasy (especially the pulp fantasy being written around that time) so much. I could cite another example – Mike Moorcock. These guys wrote quickly and vividly, there was a genuine strain of intellectual curiosity in their work, and they were never boring. What’s not to like? Complaining that such books didn’t demonstrate meticulous world-building skills, or sometimes lack narrative logic is kind of missing the point. Part of their charm – for me, anyway – is that the author let himself be carried along by his own story.

Aonghus, I read John’s recent piece as well, and confess I was a bit amused by the criticism, as it did seem to be missing the point. I read the original series at a young age, and then again as an adult, and enjoyed it both times, for different reasons.
You’re right to cite Moorcock, as he and Zelazny are both considered part of the “New Wave” of F and SF writers in the 60’s and early 70’s. The emphasis was indeed on lyricism, style and language, and less on the details of world building. Some of it seems rather purple and heavy-handed now, but I wouldn’t say that of either Zelazny or Moorcock.

Black Gate » Blog Archive » “It’s Your Job to Make it Interesting. Just Do Your Job”

[…] That’s what Tanya Huff said when Michelle Sagara suggested there was quite a bit of paranoia surrounding the idea of writing exposition – you know, all that explaining and informing stuff that I started talking about a couple of weeks ago? […]