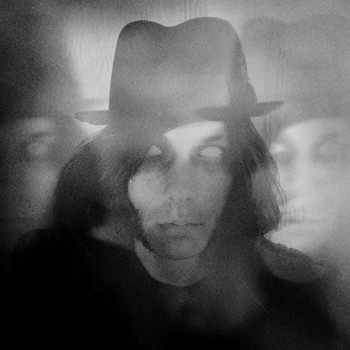 I came across Lonesome Wyatt as I nosed about a funnel cake shack in an abandoned amusement park built on a prairie settler boneyard. He had a rotted sack of popcorn in one hand and he dragged a crowbar in the other. Twilight filtered in through a roof hole. Something skittered across his hat. He hummed an old-time dirge.

This being Lonesome Wyatt of Those Poor Bastards. This being the man behind Lonesome Wyatt and the Holy Spooks. This being the author of the pulp horror novel The Terrible Tale of Edgar Switchblade and the composer of its companion album, Behold the Abyss. Which, really, if you’re in the mood for a cloven-hoofed, knife-wielding bounty hunter with step-daddy issues chasing an albino werewolf with supplementary gothic country tunes, there is no better pairing than that which Lonesome Wyatt has provided.

Under normal circumstances…well, you try to avoid talking to mad-eyed men on decrepit fair grounds; but I – being the steadfast and fearsome Black Gate minion I am – AHEMed. Stood my ground. Waited for him to turn around. I am not one to be intimidated. A man can’t hex you by humming. Usually. And this was a man I wanted to talk to.

Lonesome Wyatt turned and sneered, or possibly he smiled; these things are hard to tell. He agreed to do an interview before I had the words out of my mouth to ask. He is a mysterious revelator of mayhem and wonder, and quite possibly he is psychic.*

For your perusal, here lies the exchange Black Gate had with Lonesome Wyatt in that shadowy funnel cake shack…

Black Gate: What was the last good book you read?

Lonesome Wyatt: The last two books I read were The Mammoth Book of Frankenstein and Farewell, My Lovely and they were both very enjoyable.

Is there any genre or author you refuse to read? Why or why not?

I don’t like to read things about teens or romance unless it’s from the 1950’s or earlier. I’m just not interested.

How often do you read? What genres are your go-tos?

I read around 2-3 hours every day. My favorite genres are mystery, horror, western, science fiction and anything strange or offbeat. 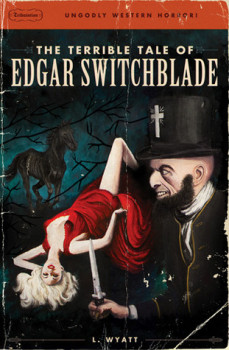 You’ve mentioned in other interviews that Poe and Lovecraft have been inspirations to you…what other writers (or musicians…or artists) inspire you – either in the MY BRAIN HAS EXPANDED AND I SEE THE WORLD MORE CLEARLY way or the OH MY GAWD, I HAVE TO GO MAKE ART way?

I like the author Robert Lowry a whole bunch. His book The Big Cage really got me going. Also Nightmare Alley, They Shoot Horses Don’t They, and all those classic noir stories are very inspiring.  The Silver Surfer 1968 series and the Ghost Rider 1970’s series have a lot of great stuff in them too. That’s what comes to mind right now, but the list of brain expanding and inspiring creations is almost endless.

…Speaking of influences. So we hear that your dad thought he was a werewolf for a little bit. If possible, please elaborate.

He thought he might have turned into a werewolf the night before because he had mud on his boot and didn’t remember how it got there. It was pretty convincing evidence.

Nope. This is the first time a story has come to me that was long enough to fill more than 10 pages.

Do you have any musical and/or written projects drowning in the dreampool that seem too daunting and outta reach now…but eh, maybe someday?

I’d like to record some music with strings and choirs and all that fancy nonsense, but I don’t have access to that stuff, right now.

Digging into The Terrible Tale of Edgar Switchblade…how many drafts did you go through?

I don’t really know. I just wrote certain parts over and over again until they felt right and made some semblance of sense…

How is the process of writing an album different than writing a novel? Do you find one to be harder than the other?

This first book was pretty hard to write, but I have the next one almost done and it was much easier. I think the first one was more difficult because I was still getting to know Edgar with The Terrible Tale… and trying to figure out exactly who he was. Now all his actions and beliefs are pretty clear to me, although that creep still surprises me sometimes. Both music and writing have their own special little problems and triumphs. It’s hard to say if one is harder than the other. It all depends on the song or scene. Sometimes everything works out perfectly and other times it’s a complete mess. You can’t predict it. 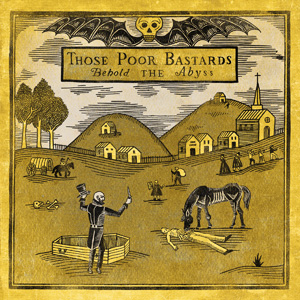 The Terrible Tale of Edgar Switchblade has an accompanying album, Behold the Abyss. Did you conceptualize the album or the novel first? How do they feed into each other?

The album just expands upon certain themes from the book. The initial idea was just for the book, but ol’ Edgar kept digging through my brain and the songs just kind of oozed on out.

The world isn’t lacking for stories of men of God gone wrong – Elmer Gantry, Harry Powell from Night of the Hunter, Hazel Motes of Wise Blood – what drew you to adding to this niche? Why do you think that this subject is so ripe for not only writers, but musicians within the roots music community?

The idea of actions or beliefs being right or wrong is a very interesting concept to me. When the church was burning witches they thought it was clearly “good” but now we look back on it and it’s unquestionably “evil.” Molesting children is considered “evil,” yet “good” priests do it all the time. I think the contradictory and absurd nature of it all draws people in. Religion is a very mysterious beast. You can’t prove or disprove the existence of God so it’s a thrill for people to try to solve the ultimate mystery. It’s all about the struggle to make ourselves feel more important than we really are.

Edgar is a cannibal. He is a whoremonger. He is a murderer. So why is it that the reader ends up liking him?

Probably because he’s so dang handsome.

Who do you identify more with – Edgar, Ulysses or Matilda?

It’s Tuesday night, you get a drunk text from Edgar Switchblade asking you to hang out. Would you go? How do you think the evening would end?

Edgar would crush and destroy such an instrument of unholy evil. However, if he requested my presence in a letter written with blood on the tanned flesh of a bloated sinner, I would go. The evening would end in gore and a tasty cannibalistic vegetarian dinner.

How did Tribulation Recording Company come to be? How many people are involved in its operation?

Tribulation is a simple way to release all the music and books I want without any outside interference. There are millions of beasts and spirits involved, but few humans.

What were the challenges you faced doing a D.I.Y. release of The Terrible Tale of Edgar Switchblade? 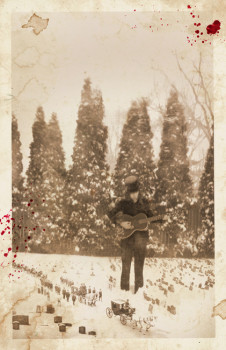 I can’t really think of any. Getting an ISBN number was kind of a pain.

How are the challenges of putting a book out on your own different than an independent album release?

It was pretty much the same.

What advice would you give to writers who want to go the indie route?

Go do it buddy. Don’t let other people discourage your creative work either. Only you know what you’re trying to do. If other people don’t like it or don’t get it, it doesn’t really matter. As long as you have made something that didn’t exist before, you have done a good thing.

Is it different than advice you’d give musicians who want to go the indie route?

Not really. I would probably just say it in a meaner voice.

When was the last time you were in a library? Do you think libraries are still important in today’s world?

I go to the library at least once a week. It’s one of my favorite places. You can get almost anything you want to read or watch without having to spend your hard earned dough on it. We always went to the library when I was growing up and I discovered some great things just browsing around. Libraries are full of an endless supply of fertilizer for the imagination. They are immeasurably important.

What is one question you would want to make sure (library) book clubs discussed after reading The Terrible Tale of Edgar Switchblade?

What is Edgar Switchblade – man, beast, angel, devil or god?

What book could draw you into joining a book club?

I don’t know. I’m pretty sure it would have to have a monster or robot on the cover though.

Both books and music are becoming more and more a digital culture. Do you think anything is lost when the physical world gets digitized?

I have absolutely no interest in digital stuff. I can’t understand the appeal. This old goat prefers paperback books and either vinyl records, cassette tapes, or CDs as a last resort.

We heard tell that there’s a Halloween album in the works. Tell us more…and is there a novel to go with it?

Some of my favorite albums are those old Halloween ones from the 60’s and 70’s. It’s a real shame that no one makes that kind of stuff anymore. Nothing beats listening to them in the gloom of the basement on a 1978 Fisher Price record player. It’s just perfect. They’re often refreshingly weird and unique.

Anyhow, those old records really moved me and I wanted to try to make something special out of that initial spark of inspiration. This record is like the musical equivalent of a homemade Halloween costume; kind of strange and clunky, but made with real heart. I’m awful fond of the thing. There’s no book with this one. It’s just a collection of stories and songs about monsters and death.

What else is upcoming for you and Those Poor Bastards in 2013?

Those Poor Bastards are playing some shows in August, then I’ll be releasing that Halloween album in October, and finally an Edgar Switchblade 7” will arrive in December. It should be a pretty frightening year.

*Blatant falsification. All of it. If I knew where a nefarious funnel cake shack existed in a broke-down Coney Island on meadow hinterlands that spit up brilliant musicians to talk to, I sure as hell would be there rather than here, sitting cross-legged and alone at 2 a.m. with a raggedy laptop to befriend me and a severe lack of (possibly poisonous) carnival food.

[…] An Interview with Lonesome Wyatt of Those Poor Bastards […]