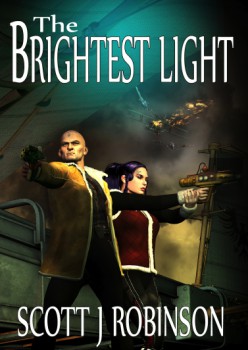 I’m not quite clear why we decided that -punk was a postfix meaning “technology.” It started with cyberpunk, I think, only there punk had its original meaning, namely a social movement with unconventional and defiant attitudes and styles. And then steampunk happened. But the term steampunk derived from cyberpunk rather than its root words, and the focus was on the technology rather than the attitude. Soon steampunk was so broad as to encompass any form of science fiction that took place in 19th century society, or at least a recapitulation of what 19th century science fiction writers thought the future would be, without the benefit of the changes that the early 20th century brought. But soon we were adding punk to the end of pretty much anything, to describe a society based on that technology: magicpunk, for example, or even fishpunk.

This month’s book, The Greatest Light by Scott Robinson, calls itself crystal-punk. As you might guess, it takes place in a world based on crystal technology, where crystal arrays provide the technological underpinning. How does that make it different than ours, you ask? In many ways it doesn’t. Robinson’s world has cars and airplanes, lasers and LCDs (liquid crystal displays), and even computers. But it doesn’t have electricity or radios, and it’s pistols are still of the single shot variety. However, it does have flying islands—skylands—where the whole society lives, having abandoned the ground as uninhabitable years ago. Ultimately, the fact that they use crystals is less important than the fact that the technology is different. This also means that it’s not clear whether this book fits in the science fiction or fantasy category, but I decided not to worry too much about that a while ago.

When the book starts, Kade Traskel has been out of the business for ten years, and he’s eager to get back in. As Kade is a former Skyway Man, a member of the world’s preeminent gang of robbers and murderers, getting back in the business may not be the best idea. The author has his work cut out for him, trying to make us sympathetic toward the protagonist, especially given the amount of murder and mayhem Kade gets up to in a very short time. It helps that Kade has regrets, and begins to doubt whether he really wants to return to his old career, but I was left wondering whether it was enough. You can write stories about a villainous protagonist, whom we reluctantly cheer for his sheer audacity, or about criminals trying to go straight and being dragged back in, or even criminals who work against the law but have their own code of honor. Kade never really seems to fit into any of those. He’s more of a failed villain than a reluctant hero, and while his struggle over redemption—how to achieve it or whether he even wants it—is interesting, it never really made me root for him.

Kade’s return to a life of crime doesn’t go as smoothly as he hoped. On his first job, he is set up to take the fall when the Green Sea Raiders steal a piece of a powerful weapon. Worse than the set up is the problem that the Green Sea Raiders don’t exist—they’re only a rumor started by the Skyway Men. Their sudden manifestation marks the beginning of a conflict between the Skyway Men, the Green Sea Raiders, and the constables of the various skylands. One of those constables, Lana, throws her lot in with Kade, figuring that he’s less of a threat than those who stole the weapon. Kade and Lana follow the thieves from skyland to skyland, in the hopes of recovering the weapon component before it can be assembled with the others and turned against the ordinary citizens of the skylands.

The danger intensifies as Kade and Lana close in on their quarry, keeping a quick pace as pursuit turns to retreat and back again, and the action scenes are exciting and tense. Kade, for all his doubts about returning to his old life, is still very proficient at the brutal work of it. Lana, on the other hand, is still very green, and while she has the skills, she also has a tendency to freeze up. There’s significant tension as they try to overcome their collective doubts, and it leads to some nice character moments. While they manage to overcome their hang-ups, they never really get over them, which felt more realistic than the usual third act of the character development arc, when the protagonists leave behind the problems that have been troubling them and proceed as if they never had them.

Occasionally the explication doesn’t really keep up with the action, and I had a hard time following what happened and why. This usually happens when the protagonists move to a skyland, which happened quite a bit near the end, and I’m left wondering where they’re going and what they mean to do there. Or maybe I just wasn’t paying enough attention as I read snippets during my morning commute.

When the book reaches its conclusion, all the sides are brought together in a grand melee. Alliances shift at a furious pace, and Kade finally gets a chance at some kind of redemption. I never really came around to liking him, but I couldn’t help but be impressed by his actions in the climax.

The Brightest Light is available from Amazon for $3.99.