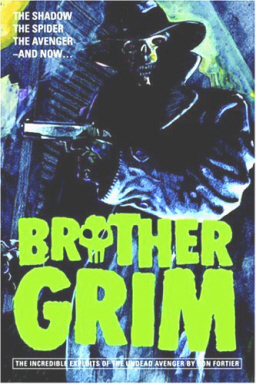 I’ve been hearing a lot about Ron Fortier and his publishing house Airship 27 over the last 12 months.

We’ve reported on a few of his titles here, including Barry Baskerville Solves a Case (which William Patrick Maynard calls “equal parts Encyclopedia Brown, Nate the Great, and Sherlock Holmes”), Joe Bonadonna’s space opera Three Against The Stars, David C. Smith’s occult thriller Call of Shadows, the TV-inspired anthology Tales from the Hanging Monkey, Jim Beard’s occult detective Sgt. Janus, Spirit-Breaker, pulp adventurer Ravenwood: Stepson of Mystery, The Moon Man — whom David C Smith describes as “a Robin Hood-type vigilante who fights crime while disguising himself by wearing a fish bowl over his head. (Yes! A fishbowl!)” — and many others.

I met Ron for the first time at the Windy City Pulp and Paper show here in Chicago in April, and I was astounded at the vast array of terrific pulp adventure titles he had spread out at his table. I purchased a tiny sample to take home and enjoy, including Charles R. Saunders 1930s Harlem boxing and Nazis saga Damballa, the SF anthology Mars McCoy, Space Ranger, and Ron Fortier and Gary Kato’s comic Days of the Dragon.

But I also picked up Ron’s Brother Grim, a collection of six pulp adventure stories featuring an undead avenger. Brother Grim first appeared on the Supernatural Crime website, and was popular enough to branch out into print. It looks like a lot of fun.

Risen from the grave in the aftermath of a brutal murder, former underworld hitman Tony Grimaldi finds himself transformed. Now, with his ebon trenchcoat, gleaming silver automatics and ivory skull mask, Tony stalked the benighted streets and back alleys of Port Nocturne, bringing justice to the downtrodden, and judgement to the wicked!

Brother Grim was published in 2004 by Wildcat Books. It is 156 pages in trade paperback, priced at $15. It is illustrated by Rob Davis, with a cover by Thomas Floyd.

I love this book cover! It reminds me of the Liam Neeson movie Darkman and Disney’s The Scarecrow of Romney Marsh.

Thanks for giving us a “heads up” about this new treasure. Unfortunately, Too many interesting books! Not enough time or money!

I know what you mean. How many people out there remember Darkman today? One of Sam Rami’s most popular early creations, as I recall. I bought a collection of all three movies a decade ago… not even sure if they’re available on DVD today.

I didn’t realize that was a Sam Raim film! I haven’t seen it since it was in the theatre back in 90 (91?). I saw the original trailer for the movie on youtube awhile back and was shocked that Francis McDormand played the leading lady in it. I didn’t remember her doing that.

The Scarecrow DVD was a pain to track down as well. It finally came out a couple of years ago and I snatched it up. Is it still available?

Believe it or not, I’ve never heard of The Scarecrow of Romney Marsh. I just looked it up, and I was surprised to find it stars one of my favorite TV actors, Patrick McGoohan (from THE PRISONER).

Doesn’t look like it’s still available, however. Used copies start at $175 on Amazon.