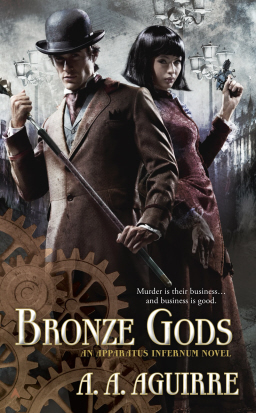 That’s 22 novels since 2008. Allow me to express my sincere admiration, with a heartfelt WOW.

Now, you’d think someone with six series on the go already wouldn’t feel particularly pressured to launch a new sequence of steampunk noir fantasy novels. But apparently, you’d be wrong.

The Apparatus Infernum novels are co-written with her husband Andres Aguirre, and released under the name A.A. Aguirre. They sound like an appealing mix of steampunk and mystery.

Here’s the back cover copy for Bronze Gods, the first volume.

Danger stalks the city of steam and shadows.

Janus Mikani and Celeste Ritsuko work all hours in the Criminal Investigation Division, keeping citizens safe. He’s a charming rogue with an uncanny sixth sense; she’s all logic — and the first female inspector. Between his instincts and her brains, they collar more criminals than any other partnership in the CID.

Then they’re assigned a potentially volatile case where one misstep could end their careers. At first, the search for a missing heiress seems straightforward, but when the girl is found murdered — her body charred to cinders — Mikani and Ritsuko’s modus operandi will be challenged as never before. Before long, it’s clear the bogeyman has stepped out of nightmares to stalk gaslit streets, and it’s up to them to hunt him down. There’s a madman on the loose, weaving blood and magic in an intricate, lethal ritual that could mean the end of everything…

Bronze Gods was released by Ace Books on April 30. It is 336 pages, priced at $7.99 for both the paperback and digital editions.