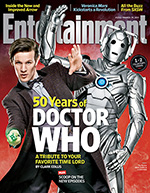 And there’s more. Out of the last fifteen covers, six featured genre work: the new Superman movie, Game of Thrones, World War Z, Oz the Great and Powerful, and Catching Fire. Counting the Doctor, that’s seven genre covers out of sixteen. And each with a feature article, of course.

Where am I going with this? Well, I don’t know about you, but I’m old enough to remember when it would have been UNHEARD OF for any genre work to appear on the cover or front page of any widely or popularly-read entertainment information vehicle. No newspapers, no magazines, no book or movie review sections. Zip. Zilch. Nada.

Maybe, you’ll say, but these are heroes, and there’s always been certain amount of popular interest in the “hero” – even the genre hero as evidenced by Flash Gordon and Buck Rogers. (And let’s not forget that Westerns are a genre too.) But has it struck you that lately there’s been an exponential increase in the popularity of the heroic figure?

It makes sense, at least to us, that there should be an ongoing discussion of the Fantasy and SF hero among readers and writers of same. Here in the pages of Black Gate itself we’ve seen, just in the last couple of weeks, Sarah Avery’s two-part review of Jason M. Waltz’s Writing the Fantasy Hero, (there’s another installment today) and John O’Neill’s announcement of the winners of the “Writing Fantasy Heroes Contest”, who answered the question “What makes a true hero?”  Further afield, John R. Fultz had a recent post about the meaning of the word epic, and how the epic hero has evolved into modern times.

We all have our favourite heroes (mine are Fafhrd and the Grey Mouser), but now we see Comic Book, Fantasy, SF, and other genre heroes everywhere. On the best seller lists, breaking box office records. Making it chic to be a geek.

Do I have an explanation for this? Well, yes. But it’s not really my explanation, and it involves another genre’s hero. Back when I was an undergraduate and taking a course in the British Novel, my professor – completely a propos of nothing, as was his want – gave his theory on how it was that a fictional character like Sherlock Holmes became so popular that people wore mourning for him when Conan Doyle killed him off.

Here’s the theory in a nutshell: In a time of great social stress, the world cried out for a hero. And the hero came. And the world was comforted.

Here’s the explanation: When Holmes first appeared, Queen Victoria was coming to the end of her reign. She’d been queen for as long as most anyone could remember, and people were a little worried about the new guy. Society was changing, changing much too quickly for comfort, and there was an unaccountable feeling among people in general that things were getting out of hand – rising crime rates, rising violence, little wars all over – and they couldn’t see why, or how to go about fixing it.

Any of this sound familiar? (When was the first Superman comic?)

Along came a genius who knew exactly what the problem was (Moriarity, the Napoleon of crime) and how to go about fixing it. And he could do it. Fix any problem presented to him. Every time. And we know that Holmes himself, while eccentric in the good old British sense, isn’t dangerous or weird because he has as his best friend and companion the sensible everyman, John Watson.

Oh man, talk about your catharsis, your restoration of order! If Holmes had been around, he would have solved the murder of Hamlet’s father in two shakes, and everyone could have lived. Well, okay, not Claudius, but you see where I’m going, right? People all over the world heaved sighs of relief, put down their Strand Magazines, and went quietly off to bed.

Holmes himself has never been out of the public eye. I can’t begin to count the number of actors who have portrayed him – the only other characters who come close are the Musketeers, D’Artagnan, Porthos, Athos and Aramis. It’s been said that there’s been a definitive Holmes for every generation, with Basil Rathbone and Jeremy Brett being two stand-out examples.

The irony is that Holmes is more popular right now than he has been since his own time – and isn’t that significant.  In addition to the Robert Downey Jr. films, we have not one, but two versions of the Holmes character, in the TV shows Elementary, and Sherlock – and I’m not even going to talk about House.

But let me return to the subject of my opening paragraph. Isn’t there another fictional hero who has recently captured the popular imagination to an extraordinary extent?  Now that we have an idea of why that might be so, let’s examine the evidence:

Highly intelligent. Apparently indestructible. Solves any problem presented to him with a combination of logic, deduction, action, and some useful tools. Plenty of acquaintance but only one real companion (at a time). Recreated for each new “generation.”

I’d agree with your suggestion Violette. While Holmes apparently will always be a popular hero (and with good reason), Doc Who is certainly become more appreciated (approved?) for public consumption. Eccentricity isn’t necessarily a negative trait in our heroes; in fact, it may even be what grants more universal acceptability.

Good post examining the timing of hero popularity. And thanks for linking to John’s great post on epic heroes – I thoroughly enjoyed that.

Thanks, Jason. I was intrigued by the theory when my professor first advanced it because it made me aware that we genre readers and writers tend to take our heroes — the existence of them — for granted. It’s when a hero becomes generally popular, as Holmes did, as some of our superheroes are now, that it makes us wonder.
Is the general public only seeing some of the time what the rest of us see all the time?
Looking forward to reading your book, btw, I’ve ordered it from my brother’s bookstore.

Ah, why thank you. And I’ve already added your name to the list of potentials for any possible sequel…

I’ll look forward to hearing what you think.

Surely the notion of a hero goes as far back as ancient myths and religions. For example, Perseus and Hercules seem like hero-like candidates to me; and the religious notion of a messiah, as I understand the notion, is someone who can make things right in some sense.

I think this still fits well with your professor’s thesis. Tales of heroes are comforting. As long as we fall short of utopia, there will always be stories about heroes–of all kinds!

“Maybe, you’ll say, but these are heroes, and there’s always been certain amount of popular interest in the “hero” – even the genre hero as evidenced by Flash Gordon and Buck Rogers. (And let’s not forget that Westerns are a genre too.) But has it struck you that lately there’s been an exponential increase in the popularity of the heroic figure?”.

It strikes me though, while we seem to have “classic literary monsters” (cf. Donald Glut’s book Classic Movie Monsters) such as Count Dracula, Mr. Hyde, the Frankenstein’s Monster, the Phantom of the Opera, etc.), one does not seem to find as many “classic literary adventure heroes”*. Zorro and Tarzan stand as the most obvious exceptions.

(*Incidentally, for the operational definition of “classic”, a property must have debuted prior to 1938, for Action Comics#1’s introduction of Superman and Zatara. Otherwise, the negative influence of those properties stands as a possibility. In any event, I exclude properties that started in comic books or comic strips )

mcglothin: Of course there have been heroes as long as there has been fiction; what I meant to suggest, and what my prof was suggesting with particular reference to Holmes, is that a fictional hero captures the popular imagination at times of cultural or societal stress. Of course we don’t necessarily know what cultural stressors resulted in the rise of the Hercules or Perseus myths, nor, for that matter, how widely popular the characters might have been. Though I think we can assume they were, judging from their survival.
The difference we may be seeing now is that fictional heroes who have always been popular with genre audiences are now being well-received by a much wider, general audience — as Holmes was in the day of his creation. It’s interesting, perhaps, that we’re recycling existing heroes, rather than coming up with an entirely new one.
PB210: I’m very interested in your observations on classic villains and monsters. As for classic literary adventure heroes, I did mention the Musketeers, and we might also consider the Scarlet Pimpernel, and Cyrano de Bergerac.
Do you think villains might have suffered in their “franchise friendliness” from the fact that so many of them are created solely in order to be defeated by the hero?

“It’s interesting, perhaps, that we’re recycling existing heroes, rather than coming up with an entirely new one”.

Well, a certain director tried to get the rights to Flash Gordon but could not in the 1970’s and ended up making a new franchise instead……..

Quick note on “classic adventure heroes”; James Fenimore Cooper may deserve some credit for encouraging series novels, since he wrote five Natty Bumppo novels, including Last of the Mohicans.

I would find it interesting if someone could track the box office results of the “classic adventure heroes” in recent years, since about 1960 or so. (Leonard Maltin has split his film review books at a 1965 dividing line.)

Regarding one of your questions, it does seem intriguing that prose horror seems less series focused than film horror (TV horror shows seem more to follow an anthology format; notice that Count Dracula, Frankenstein’s Monster, Mr. Hyde, the Phantom of the Opera, etc. do not seem as prominent as the anchors of TV series as Zorro, Tarzan, etc. have). I suppose authors found it perhaps a bit too silly and childish to constantly reverse the seeming defeat of their villain, or to have them constantly escape prison.

I see what you’re saying. But given that genre is something of a later invention or development in literature–or probably more accurately, a development in literature sales–the fact that wider and non-genre audiences are identifying with fictional heroes seems to me to be more like a return to the norm of human history (i.e. people in general being interested in hero stories).

I agree that the sorts of heroes that become popular at certain times is probably related to some specific stress (or “stressor” as you call it). Perhaps sociology can give us some insight into these phenomenon.