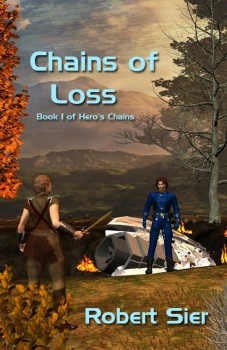 That’s what I tell my wife that this book is about whenever she asks. Nanites, power suits, superhuman strength and intelligence versus hordes of raging orcs armed with crude weapons and dark magic. Okay, that’s not completely accurate. There’s only one cyborg, at least until the assimilating begins, and while there are plenty of orcs, most of the fights are against the same one. So, maybe “cyborg versus orc” would be more accurate.

Still, with a premise like that, there’s a lot of fodder for great stories, once you consider what else would be in a world that produces orcs and cyborgs: AIs and computers and starships, vampires and wizards and necromancy. And what happens when you combine them: orcs who can sense radio signals, flying humans created by technology? Robert Sier has managed to find a place for all of these things in his book, and the only question is with so much material, where do you begin.

So he starts with the hero. The cyborg, Derek Kazenushi, isn’t exactly military-grade: he just has the standard upgrades that any citizen of New Athens would, including enhanced speed and strength and healing, a few augments in matter fabrication, and the help of his built-in AI, Shadow. What he’s really specialized in, piloting, isn’t much help once his ship inexplicably crashes on Earth. That shouldn’t be possible, as Earth is light-years from New Athens, and faster-than-light travel doesn’t exist. New Athens lost all contact with Earth seven centuries ago, and Derek quickly learns that things have changed. There’s been a cataclysm, a merging of Earth with other worlds, bringing strange peoples and even stranger magic. Come to think of it, Earth merged with another world in the last novel I reviewed at Black Gate, too. Why doesn’t that sort of thing ever happen on this Earth?

The moment he emerges from his spacecraft, Derek meets Mycah, a primitive-by-his-standards woman who’s been sent to meet him by a prophet who knows more about Derek than should be possible. Unfortunately, Derek’s ship crashed in orc territory, and they are eager to claim it as their prize. Leaving his Shadow behind to maintain the ship’s defenses, Derek travels with Mycah to find a place of safety.

There’s a fish-out-of-water story at the core of Chains of Loss. There are plenty of stories in which modern people travel to a fantastic world and use their modern knowledge and skills to become heroes. In the process, though, they have to overcome their own ignorance and preconceptions about how the world works. Derek faces the same situation, but being a several-centuries-more-advanced cyborg, he has a lot more skills and knowledge (and power) than the average modern Westerner would when faced with a Medieval world. His greatest weakness is that he’s a pacifist. His reluctance to use violence, and absolute refusal to kill, causes real problems when he encounters the Reaver, an orc superpowered by dark magic.

In some ways, Derek is too nice. New Athens is supposed to be a utopia, where violence and murder are practically unheard of, but that’s a little hard to reconcile with the fact that Derek has militia training and carries a gun. Apparently, New Athens doesn’t have an economy that we would recognize, as Derek rather freely gives away his few possessions and is puzzled by the fact that people would think that he’d expect payment. And I was beginning to wonder whether the New Athenians had eliminated the human sex drive, as he showed no interest in either of the women who were obviously into him. He would be too innocent to survive long in the dark world he finds himself in if he were any less powerful. The one time he really cuts loose, it’s clear just how devastating his abilities are.

This story faces the danger, common in superhero stories, of making the hero so powerful that it’s hard to keep him challenged. Either the author has to keep throwing more and more powerful enemies at him, or hold the hero back with self-imposed limits, such as self-doubt or a debilitating moral code. This book relied primarily on the latter, successfully for the most part, but I always find that less entertaining than when the hero meets his match. It was a relief to see Derek get in over his head once in a while, though he was brought there more by his ignorance and pride than any lack of ability. It will be interesting to see if the author can keep Derek challenged in future books, though there are certainly bigger and worse monsters waiting in the wings. I’m eager to see how he fares against those flying, telekinetic Nhori.

Which brings us to secondary plot of the book. While the story centers on Derek and Mycah, there’s a bigger conflict going on in the background, a cold war between the cities of Kaitopolis, led by House Keiths, and Talestri, led by the Vhaes, the legendary wizard-lord of the city. The Keiths appear to be the good guys. though they’re not above torturing and experimenting on criminals, and Styx Keiths is downright scary. They work wonders with magic similar to what Derek can do with technology. But Vhaes makes the Keiths look like upstart amateurs. Mycah had a falling out with House Keiths at some point, but by the end of the book, she’s convinced that it’s the best place for Derek. The book ends before the awkward meeting and uneasy alliance can happen, but clearly there’s more to come.

Chains of Loss is a short, fast-paced book, and a quick read. It’s well written and entertaining, and Derek is a likable hero, if a bit too naive. The biggest weakness of the story is that the plot is fairly linear, a straightforward trip from point A to point B, with the usual sort of complications heroic fiction entails. Fortunately, the Vhaes and House Keiths sections helped to keep things interesting, and I’m looking forward to seeing what happens when those plotlines meet. Chains of Loss is available at Amazon (print and e-book) and Barnes and Noble (e-book).