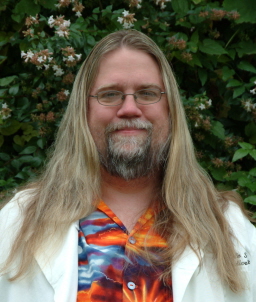 Fantasy novelist and Black Gate contributor Jay Lake was diagnosed with colon cancer in April 2008, and since then he has followed the progress of the disease and his tireless efforts to combat it with brutal honesty on his blog.

His posts are frequently painful to read, but Jay’s characteristic humor and love of life always shine through. But this week the news turned darker, starting with Thursday’s post titled “The Hour and Manner of my Death.”

The new metastatic tumor sites uncovered during the surgery make things a lot more serious than they already were. And that is saying something. I have not given up seeking a cure… but it seems highly likely to me I will go terminal within the year, or at best, sometime in 2014. Even then, it will take time for me to die, possibly up to another year…

Obviously I do not know the precise hour and manner of my death. But I know it will likely come in the next year or so, and it will come due to organ failure and the related system breakdowns as my cancer advances. The bullet with my name on it has been inching towards me for almost five years. I can watch it spiral in the air as it lazes ever onward toward my as yet still beating heart.

For the past five years, Jay has staunchly avoided a fatalistic tone on his blog, so this change has understandably caused a tremor among his fans, including his friends here at Black Gate.

I first encountered Jay Lake in the BG submission pile over a decade ago. He impressed me immediately — not just for the quality of his fiction, which was exceptional, but for the exuberance of his cover letters and the sheer volume of submissions. Jay is one of the hardest-working authors I’ve ever met, and he never gave up. One of his early short stories featured a hero who builds a fully-automatic, self-loading ballista using nothing but fallen logs and rope. That resilience and never-say-die attitude reminds me of Jay to this day. I purchased two stories from him, the brilliant “Fat Jack and the Spider Clown” (BG 8), and the vividly original “Devil on the Wind” (BG 14, co-written with Michael Jasper). Even after his diagnosis, Jay’s output continued to impress, and his latest novel, Kalimpura, arrived January 29 from Tor Books.

We’re not sure we can get ever get used to the idea of a fantasy genre without Jay Lake in it. We hope we don’t have to.

Until I read his blog. Within the first few posts I found out I am stupid, amoral, insane, evil, dishonest, etc., simply because I disagree with him politically.

Dont get me wrong, I hope he pulls through and beats cancer, but that really turned me off.

I think there’s nothing like staring death in the face to keep you from mincing words. You’re absolutely right that Jay has strong opinions on his blog. That’s become part of his journey.

Stupid cancer! My wife of 15 years died from cancer-related causes in 2005 (I’ve since remarried).

Hmm, unlike the first commenter, I think I agree with everything I’ve read so far on Jay’s blog.

Effing cancer. I want to beat it up with a brickbat.

I met Jay Lake a few times at a writing conference called Writer’s Weekend, now called Cascade Writers, in the Pacific Northwest. Exuberant is exactly the word for the Jay I met before his cancer. When I met him again shortly after the diagnosis of his second bout of cancer, he was beginning to convert that all-purpose wildness into a survival tool.

Now would be an excellent time for a medical breakthrough.

> Stupid cancer! My wife of 15 years died from cancer-related causes in 2005 (I’ve since remarried).

Very sorry to hear that, Awsnyde. Among many other things, reading Jay’s blog had taught me a lot about how devastating the disease can be to those around you.

> Hmm, unlike the first commenter, I think I agree with everything I’ve read so far on Jay’s blog.

I didn’t know it was possible to agree with EVERYTHING on Jay’s blog. 🙂 But yes, I frequently found Jay to be a very articulate defender of my own viewpoints.

[…] we reported in early February of last year, Jay began preparing his readers for his death with a blog […]