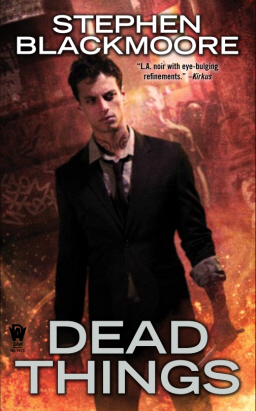 I talked about genre mash-ups Monday in my post on The Last Policeman. There’s an obvious one I forgot: hard-boiled detective zombie novels.

Not sure how I spaced on that one. Three titles I’ve covered as New Treasures in the last few months alone have been undead crime novels: Stefan Petrucha’s Dead Mann Running, Tim Waggoner’s The Nekropolis Archives, and Chris F. Holm’s Dead Harvest. As trends go, this one is a little more welcome than most, at least for me. Necromancers and tough-talking private eyes… what can I say, they go together.

The latest entrant into this crowded sub-sub-genre, Stephen Blackmoore’s Dead Things, sounds like it will fit in nicely:

Necromancer is such an ugly word, but it’s a title Eric Carter is stuck with.

He sees ghosts, talks to the dead. He’s turned it into a lucrative career putting troublesome spirits to rest, sometimes taking on even more dangerous things. For a fee, of course. When he left LA fifteen years ago, he thought he’d never go back. Too many bad memories. Too many people trying to kill him.

But now his sister’s been brutally murdered and Carter wants to find out why. Was it the gangster looking to settle a score? The ghost of a mage he killed the night he left town? Maybe it’s the patron saint of violent death herself, Santa Muerte, who’s taken an unusually keen interest in him. Carter’s going to find out who did it, and he’s going to make them pay.

As long as they don’t kill him first.

A little older but somewhat along the same line (probably closest to the Nekcropolis Archives): Have you read/seen Bone Song and Black Blood, both by John Meaney?

I bought BONE SONG a few years ago, but I was completely unaware of BLACK BLOOD. It is now in my Amazon cart.

Thanks for the head’s up! These would make a nice topic for a future New Treasures article.